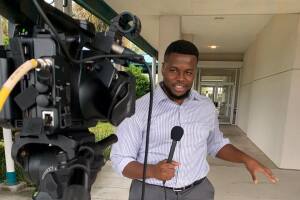 Before coming to the station, he lived in Panama City Beach, Florida.

Originally, Jarell was not interested in the news but he developed a passion for telling stories during his college years. In 2016, he decided to begin his news career working as a TV producer for Polk County Government Television.

After five months, Jarell decided to take another step in his news career by joining his first news station, WTXL ABC27, as Photographer in Tallahassee. Throughout the next two years, Jarell quickly excelled at his position and eventually worked his way up to becoming a reporter.

Seeking a change of scenery, Jarell decided to and join WJHG Newschannel 7 in Panama City Beach, Florida. During his time at WJHG, Jarell covered Hurricane Michael and its recovery efforts, the coronavirus outbreak and other local stories. He also won a Florida News Award for his story “Glenwood and Millville Forgotten.”

Jarell was born and raised in Winter Haven, Florida. He is an avid fan of the Tampa Bay Buccaneers, Orlando Magic and the Miami Heat. When he’s away from camera, Jarell enjoys gaming, watching anime, working out, listening to hip hop and spending time with family and friends.

If you see Jarell out and about don’t be afraid to say hello. If you have any story ideas you can reach out to Jarell via Facebook, Twitter, Instagram or by email at jarell.baker@kxxv.com