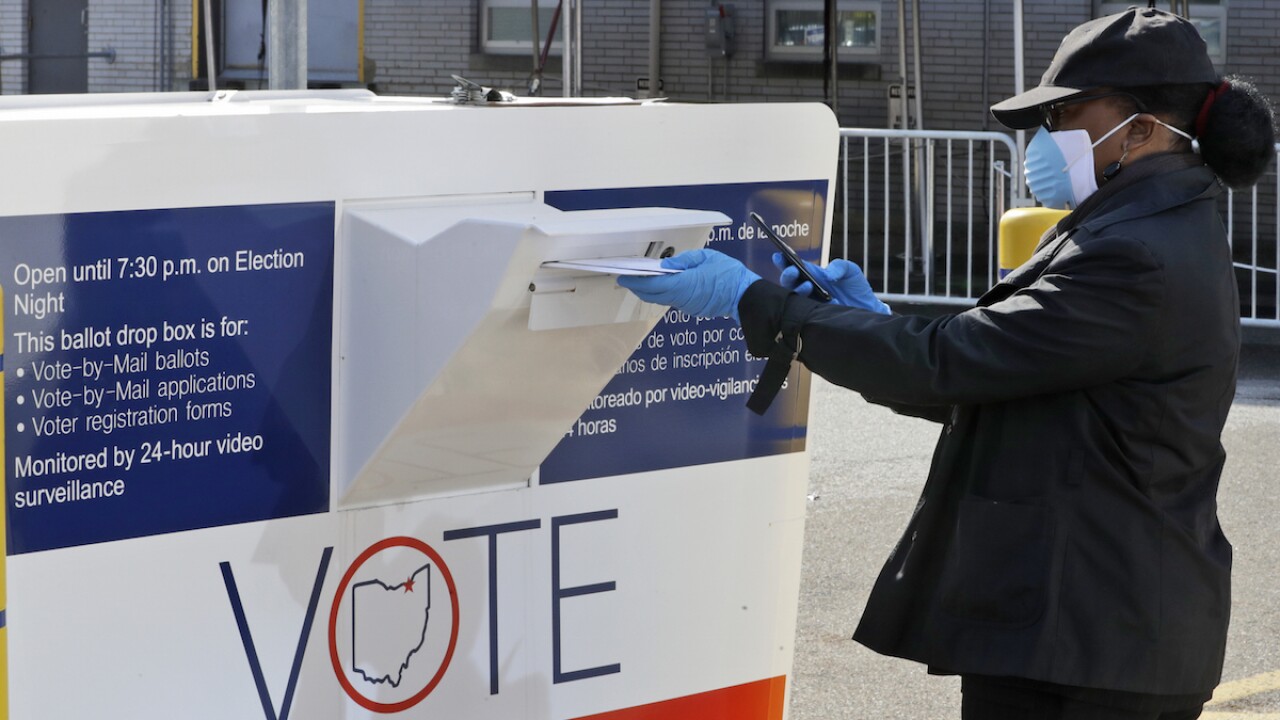 Copyright 2020 The Associated Press. All rights reserved.
Tony Dejak/AP
Marcia McCoy drops her ballot into a box outside the Cuyahoga County Board of Elections, Tuesday, April 28, 2020, in Cleveland. The first major test of an almost completely vote-by-mail election during a pandemic is unfolding Tuesday in Ohio, offering lessons to other states about how to conduct one of the most basic acts of democracy amid a health crisis. (AP Photo/Tony Dejak)

The Texas Supreme Court ruled Wednesday that a lack of immunity to the new coronavirus does not qualify a voter to apply for a mail-in ballot.

In the latest twist in the legal fight over voting by mail during the coronavirus pandemic, the court agreed with Texas Attorney General Ken Paxton that the risk of contracting the virus alone does not meet the state’s qualifications for voting by mail.

“We agree with the State that a voter’s lack of immunity to COVID-19, without more, is not a ‘disability’ as defined by the Election Code,” the court wrote.

Texas voters can qualify for mail-in ballots only if they are 65 years or older, have a disability or illness, will be out of the county during the election period, or are confined in jail. The Texas election code defines disability as a “sickness or physical condition” that prevents a voter from appearing in person without the risk of “injuring the voter’s health.”

Although the court sided with Paxton's interpretation of what constitutes a disability, it indicated that it is up to voters to assess their own health and determine if they meet the state's definition.

"We agree, of course, that a voter can take into consideration aspects of his health and his health history that are physical conditions in deciding whether, under the circumstances, to apply to vote by mail because of disability," the court ruled.

The high court also rejected Paxton’s request to prevent local election officials from sending mail-in ballots to voters who were citing lack of immunity to the coronavirus as a disability. Those officials denied they were operating outside the law and argued they cannot deny ballots to voters who cite a disability — even if their reasoning is tied to susceptibility to the coronavirus.

When voters cite disability to request an absentee ballot, they're not required to say what the disability is. The voters simply check a box on the application form, and if their application is properly filled out, locals officials are supposed to send them a ballot. The state ultimately conceded that officials can't reject those voters.

The all-Republican Supreme Court had previously put on hold a state appeals court decision that allowed voters who lack immunity to the virus to qualify for absentee ballots by citing a disability. That appellate decision upheld a lower court's order that would have allowed more people to qualify to vote by mail.

The justices had not ruled on the merits in that case. But in considering Paxton’s request, which they took up in a virtual hearing last week, they grappled with how to interpret the state’s eligibility for absentee voting.

In its order, the court indicated that two justices — Jeffrey Boyd and Jane Bland — agreed that a lack of immunity fit the first half of the state's definition for disability as a "physical condition" but found it didn't meet the second half because it is "highly improbable" for the voters overall to contract the virus.

In a concurring opinion, though, Bland suggested higher rates of infections in some communities could present "a health risk for some voters — specifically, those who lack immunity and have health histories or physical attributes that make them susceptible to the worst effects of the disease."

A separate case is pending in federal court, where a three-judge panel of the U.S. 5th Circuit Court of Appeals temporarily blocked an expansion of voting by mail ordered by a lower court. The appellate panel granted what's known as an administrative stay, which only stops the lower court ruling from taking effect while the court considers whether it will issue an injunction nullifying it during the entire appeals process.

The issue is being fought on multiple fronts but is likely headed to the U.S. Supreme Court as Texas Republican officials continue to resist expanding voting by mail during the pandemic.

This article originally appeared in The Texas Tribune at https://www.texastribune.org/2020/05/27/texas-vote-by-mail-coronavirus/.