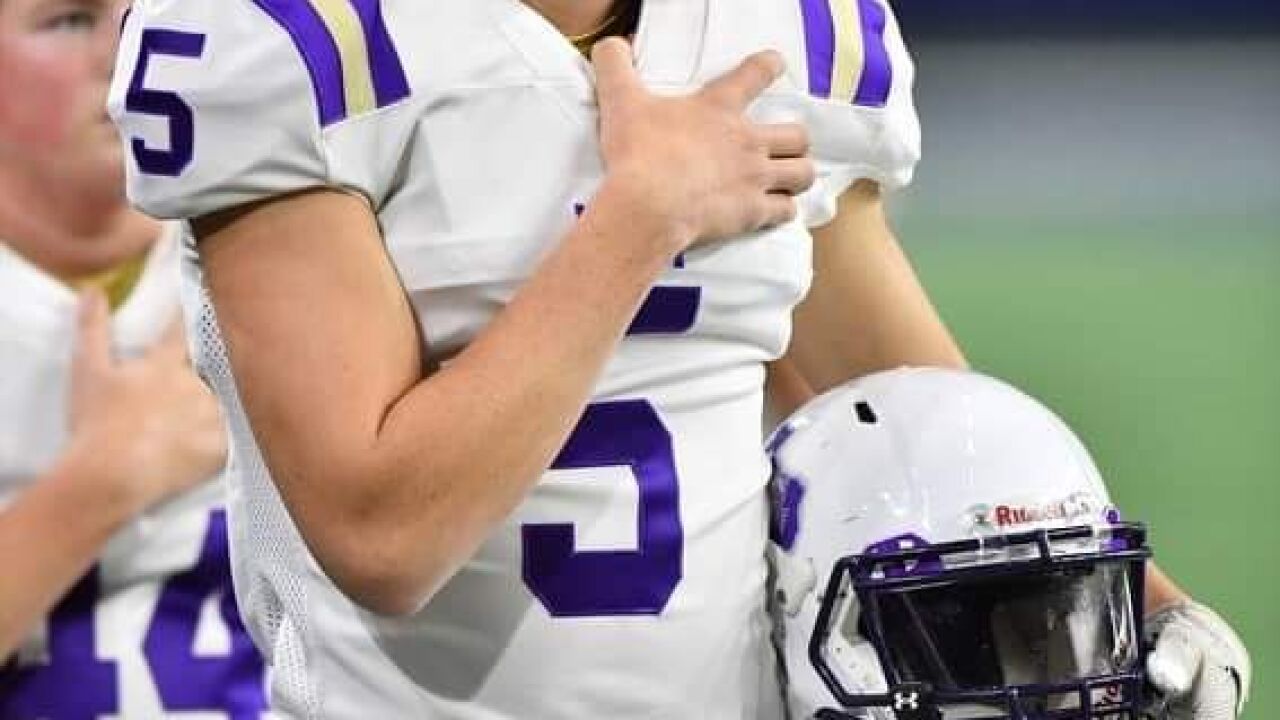 Backup Quarterback Aiden Gast would rather be on the field, but for now, the sidelines will have to do.

"It feels fantastic," Gast said. "All the blood, sweat and tears that my brothers and the coaches put into it. It's really paid off."

"It was a little bit sad to see him on the sidelines because I know it was killing him to be out there and not be out there with the team," said Kate Seidenberger, Gast's mother. "But it meant everything in the world for him to be here just to support his team."

On Wednesday, they didn't know if Gast would even get back up after he collapsed on the field during practice, according to Mart Superintendent Len Williams.

Williams said the coaching staff could not find a pulse on Gast when they rushed to his side. They quickly jumped to action, ripping his shoulder pads off. Before they were able to perform CPR, Gast came to.

An ambulance arrived on scene about 30 minutes later. Gast was brought to McLane’s Children’s Center in Temple for evaluation. The incident happened around 3 p.m.

"They responded appropriately and immediately and really they got him to the people who could help him the best and they literally may have saved his life, so we're very appreciative of them," Seidenberger said.

"They were there for me when I went down, so I just wanted to make sure I was here for them," Gast said.

Doctors said Gast had suffered a heart attack. They specifically called it a right branch bundle block, which means the electric pulses that tell the heart to pump were not working correctly.

Doctors are not sure why or how this happened to the 16-year-old junior, but they are planning tests to find out more.

Gast is now in Maryland, meeting with a cardiac specialist.

"We're going to see what's going on in that heart of his and we'll see kind of where we go from there," Seidenberger said.

Seidenberger said a pacemaker could be what comes next for her son.

"Whatever God's plan is, is God's plan," Gast said. "Hopefully, I can recover quickly and get back to football."

While Gast is leaving it up to fate, his heart is still in the game.

"Absolutely nothing will keep me off the field," Gast said. "I love football so much."

Williams said this incident changed how he views athletics. He has proposed to the school board that every student should have to be screened for heart ailments as part of their physical exam.

He is awaiting school board approval.

Currently, there are bills being proposed in the Texas legislature that would require all high school UIL athletes to receive a cardiac assessment before being allowed to participate in school-sponsored athletic activities (House Bill 76). Williams said he would 100 percent support this bill.