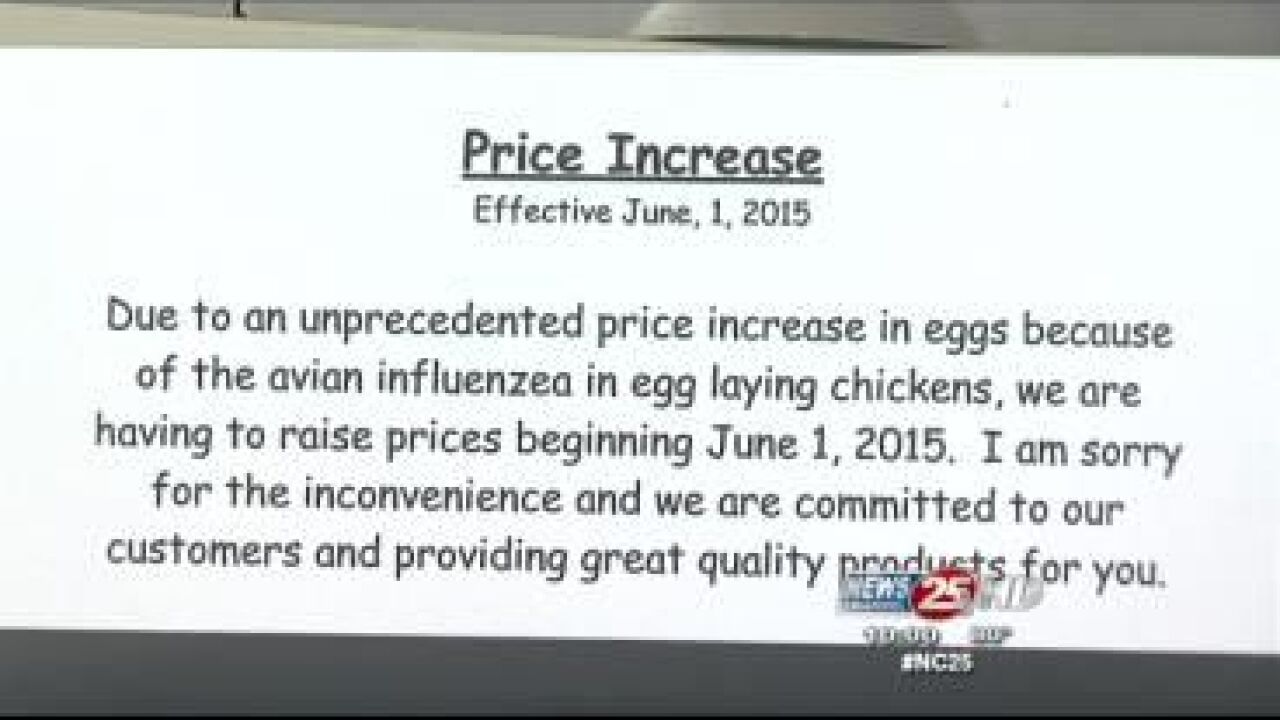 Some business owners that rely on egg products daily are having a hard time getting every egg product they usually get from their suppliers.

This, after a bird flu outbreak, has led to an egg shortage nationwide.

Business owners have been paying more or expect to pay more for egg products in the near future.

This means some customers will have to pay extra when they go to breakfast restaurants or purchase baked treats.

Angie Baccus owns the Simply Delicious Bakery in . To meet the demand for cakes, cupcakes, or cookies they use 50 dozen eggs a week, at least.

Since June 1, customers have paid up to $2 extra for an 8-inch cake and 25 cents more for some of the cupcakes.

"It is an increase we have to pass on to our customers. Hopefully it's temporary. We hate doing that, but in the meantime our cost has gone up so we have to temporarily go up a little bit on our prices," said Baccus.

"I knew it was going to be an increase but I still like their products so it's worth it to me,” said Morrison.

Making the product is not only more expensive for Baccus but this week she was not able to get liquid eggs from her supplier.

“We've had to look elsewhere. We've had to go to Walmart to buy eggs because we weren't able to get what we normally have,” said Baccus.

Mike Beheler who owns the Egg and I Waco franchise usually uses liquid eggs for some egg dishes at the restaurant.

He expects his supplier to run out of liquid eggs within a week or two. According to Beheler, liquid eggs include products such as egg whites and egg beaters, which will be the first supply to be depleted.

He plans to order 30 to 35 cases of shell eggs compared to the 15 or 16 he orders at the moment. These additional egg cases will be used for making liquid eggs.

One shell egg case costs Beheler $40 but he said he will need to get two cases to make one case of liquid eggs, which is $45.

In addition, he will have to pay someone part-time to crack eggs into a bucket and whip them so they are ready to scramble.

His customers will notice an increase in prices for egg dishes at the end of the month.

“You talk about going up 10 to 15 cents most people won't notice it, 20 to 30, they are going to notice it and they're going to question it,” said Beheler.

He said his staff has warned some of the customers about the change.

Beheler does not expect another price increase on egg dishes until October of next year unless this shortage is catastrophic.

He said this will not be a short-term shortage but there are projections it will last for up to a year and a half.