Red Zone Game of the Week: Harker Heights vs. Shoemaker 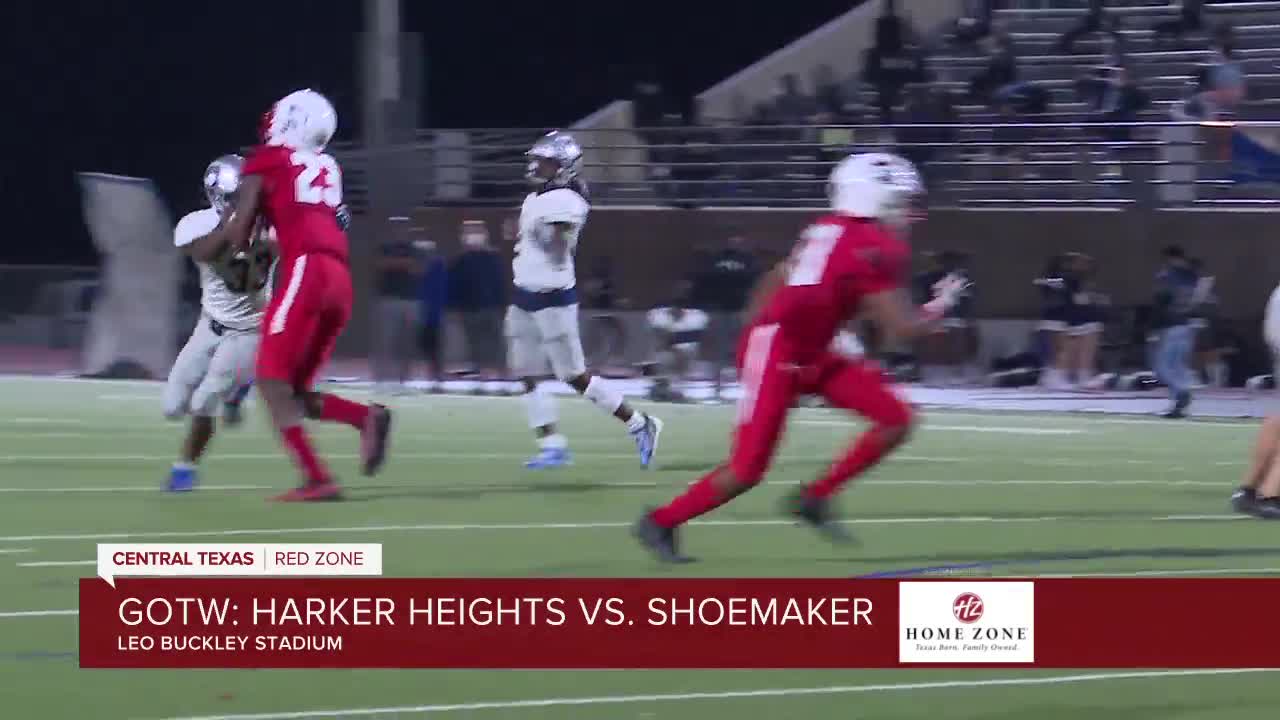 Game of the Week: Harker Heights vs. Shoemaker 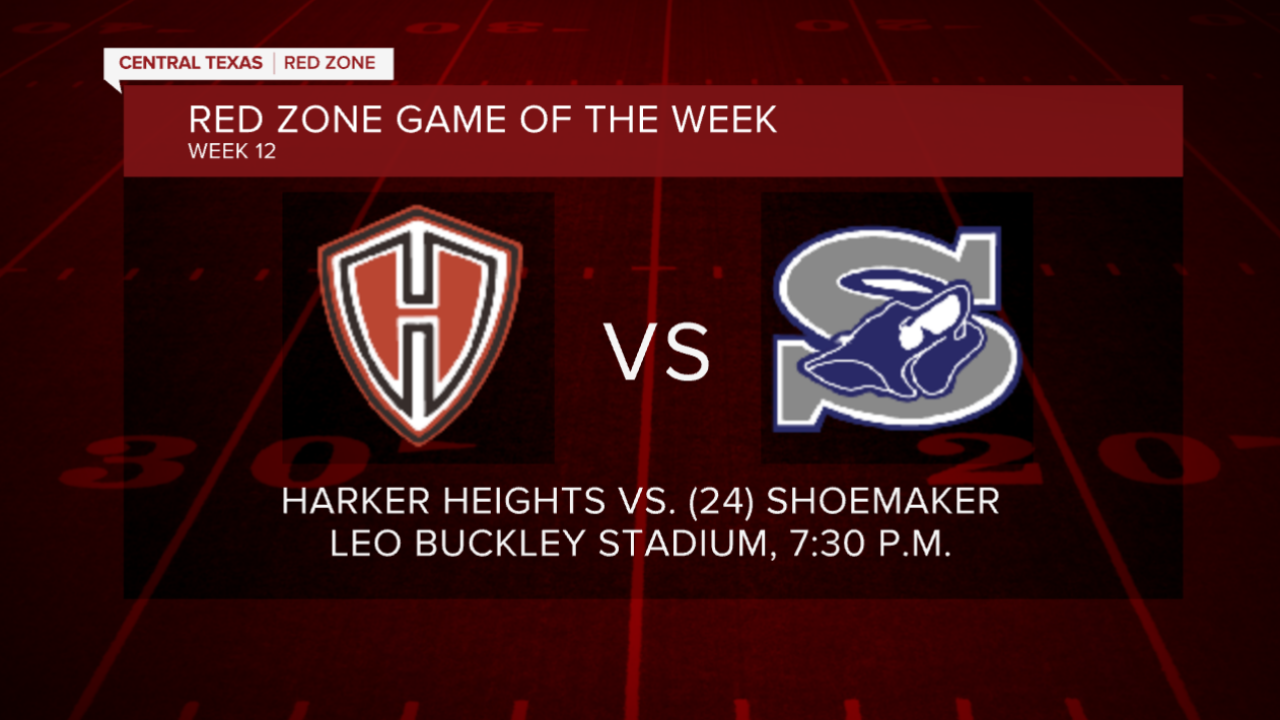 KILLEEN, Texas — As the 1A-4A playoffs get underway, Shoemaker and Harker Heights are gearing up for a cross-town showdown with major playoff implications. The winner will likely end up as unofficial Killeen City Champions.

It is a feat the Knights have not achieved since 2003, the year several players on the current team were born. At the end of practice Wednesday, Head Coach Jerry Edwards described his team as a "team of destiny."

"That was just kind of a goal, where we felt if we could get to seven wins, that would put us in the playoffs," Edwards said. "That goal is still achievable and still attainable, and we control that destiny."

But, after losing two of their first three district games, the Knights dreams are quickly fading away. Harker Heights must win each of its final four games to reach the elusive seven-win mark.

COVID-19 almost stole that opportunity away from them, when their game with Belton was canceled due to an outbreak of the virus at Belton.

That game was rescheduled to December 3. If it had not been rescheduled, the Knights would have been robbed of the chance to reach seven wins.

"This season is important to them," Edwards said. "We're crossing our fingers and saying our prayers that we can get all 10 games in, and it looks like we're gonna get that opportunity."

Edwards was optimistic coming into the 2020 season in large part due to the Knights' talent on offense. Through six games, Harker Heights is averaging 31.3 points per game. When the Knights score more than 30 points, they are 2-1.

At 1-2 in district though, Harker Heights is in desperate need of a win to stay in the race for the district's final playoff spot. Harker Heights (1-2), Killeen (1-2), Bryan (2-2) and Belton (2-1) are all fighting for two playoff spots. The Knights have the second most favorable remaining schedule among those teams behind Bryan.

The Knights could greatly improve their position with a win over undefeated Shoemaker.

"I feel like since they're one of the top teams in the district," Harker Heights safety Christopher Sistrunk said. "If we can knock them off their pedestal, we can knock anybody else off."

The path to seven wins will still be difficult if the Knights can pull off a win, but players say they still like their chances.

A seven-win season would mark the next step in the program's rise. In 2018, the Knights won just one game and finished eighth in District 12-6A. Last season, they won four games and finished fourth in the district.

"I feel like if we do this now, it'll set the tone for the rest of the years after this," Sistrunk said.

A win would also put the Knights in position for an unofficial Killeen City Championship. Heights already beat cross-town rival Ellison 35-34 this season. They are scheduled to play Killeen High November 20.

"It adds a little more to it, a little more bragging rights," Edwards said. "Shoemaker got us in overtime last year, and our kids haven't forgotten that. So, they're ready to go out and get a win."

Shoemaker is 6-0 to start the season for the first time in program history.

According to Head Coach Toby Foreman, that success can largely be attributed to experience and consistency over the last three seasons.

"There's no substitute for experience," Foreman said. "That's the one thing I can't give a guy until they have it. So, that makes a big difference."

In Killeen, consistency is hard to come by. Students from military families are consistently forced to pick up and leave in the middle of their high school careers.

"A lot of our families are military families and they've made concessions for their kids to be here and be a part of the program," Foreman said. "And I think it means something to them. I've only been here four years, but it seems like every year, there's been more and more commitment out of the community and the kids."

Several of Shoemaker's stars have played together since they were in middle school. Now, that core group of young players has grown and brought the Grey Wolves into the spotlight. Shoemaker is ranked No. 24 in 6A.

"Our team in general has been together since we were little," Shoemaker cornerback Adonte Crayton said. "So, our team chemistry is there and we're all good together."

Last season, Shoemaker showed its first major signs of growth. After winning just two games in 2018, the Grey Wolves won seven in 2019 and earned a place in the 6A playoffs.

"Our experience helped a lot, because we've been there before as a young team," running back Devin Brown said. "Now that we're here and we're older, now we know."

This year, their eyes are on a different prize: a district title.

"That's always the goal," Foreman said. "But this year, it was the most attainable."

In order to get there, the Grey Wolves will need to keep pace with Temple, who is also undefeated in district play. Those two teams play on November 19.

With a win against Harker Heights, Shoemaker will take home the unofficial Killeen City Championship. They have already registered wins over both Ellison and Killeen High this season.

In 2017, the Knights took down Shoemaker by scoring a fourth-quarter touchdown in a 14-7 win. The next year, the Grey Wolves got revenge by beating Harker Heights 35-14.

Shoemaker beat the Knights in overtime 27-21 in both schools' 2019 regular season finale.

You can catch highlights in the Central Texas Red Zone at 10 p.m. on KXXV ABC 25.