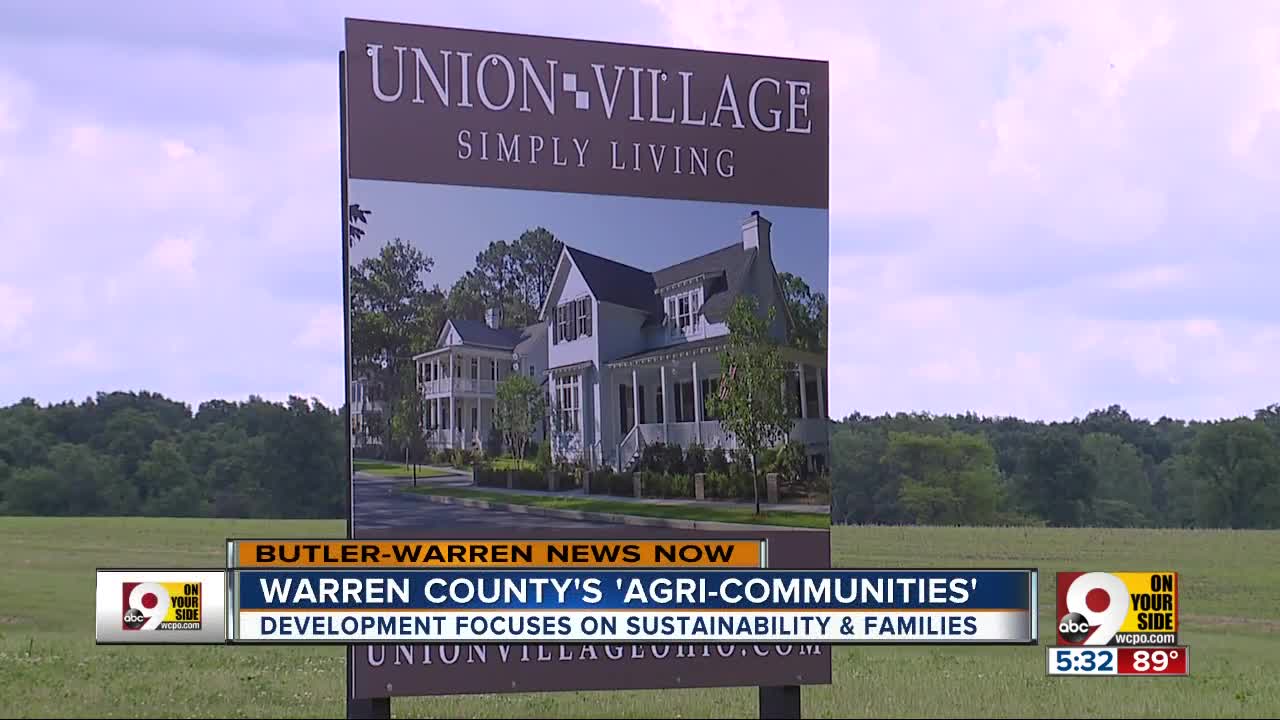 Ohio's first "agri-community" will have about 135 homes built on the 142 acre farm in Morrow. All of the homes are being built by Pendragon Homes with access to the organic farm-grown fruits, vegetables and farm-raised meats. 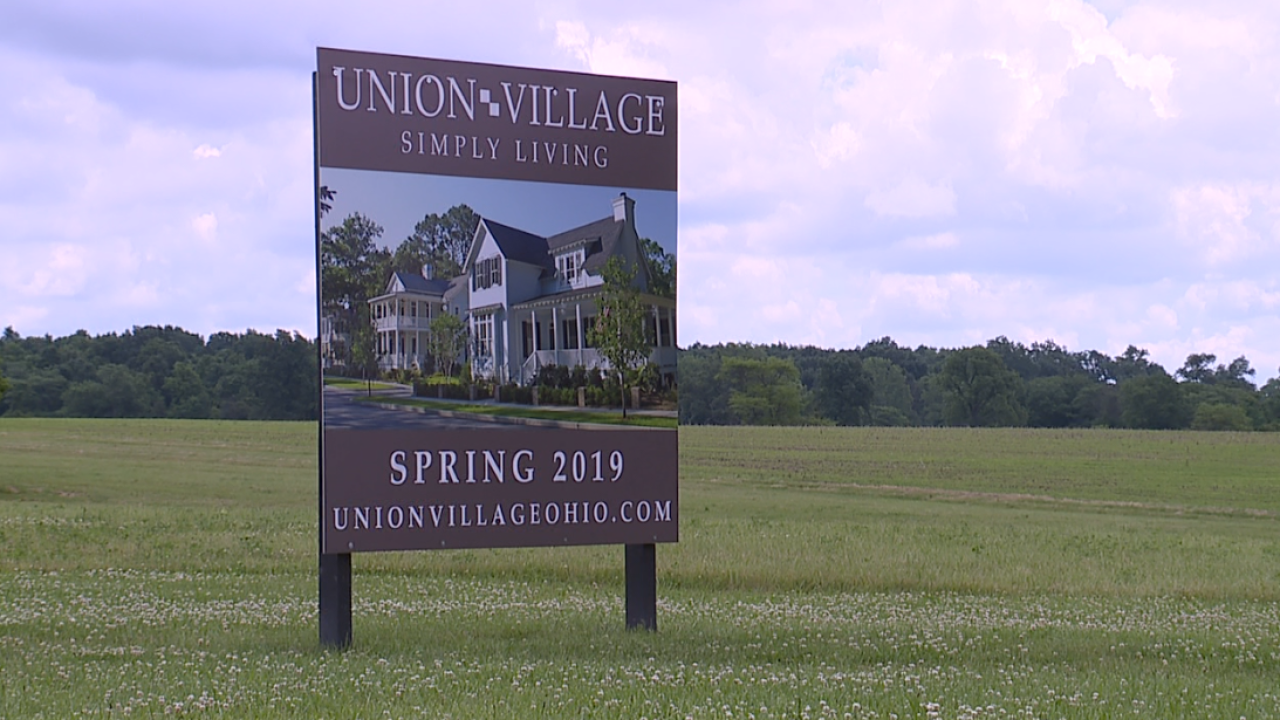 "I had an autoimmune disease that was killing me," said Aberlin. "I couldn't even stand long enough to feed my children, and I was on a walker."

The owner of Pendragon Homes said she decided to stop taking her prescribed medication "'cause I could feel it hurt me." Instead, she started eating organic food. It worked, she said. She started to feel better. Her illness seemed completely reversed.

"It was at that point that I realized we have this farm, and I have a home-building business for 15 years," she said. "It made sense to put the two of them together."

That's how Aberlin Springs was started. Ohio's first "agri-community" will have about 135 homes built on the 142 acre farm in Morrow. All of the homes are being built by Pendragon Homes with access to the organic farm-grown fruits, vegetables and farm-raised meats.

Not far away (and also in Warren County) is another development getting underway in Turtlecreek Township. Union Village is designed to follow the development style called new urbanism, which emphasizes walkability, sustainability and a variety of housing styles that appeal to multiple generations, including millennials, families and empty nesters.

"That's what everyone is looking for right now. They're looking for that age-in-place, walkability, live, work, play type environment," said Justin Doyle, owner of Justin Doyle Homes. He is one of ten builders who have recently signed on to build in Union Village.

"With the builders, even the architecture is different," said Dean Morrissey, a partner with Union Village Development Company. "It's bringing you back to the old traditional designs."

The first homes in Union Village should start construction this year, but the plan calls for many more: 4,500 homes built on over 1,200 acres over the course of at least 30 years.

"(The plan) also includes apartments and condos and townhouses and a million square feet of commercial," said Morrissey.

Union Village and Aberlin Springs have several similarities, including a shared goal of bringing generations of families together in communities.

"I love the mission behind that whole development," said Aberlin about Union Village. "That is one of the fastest-growing concepts right now in development, is having this connectivity and having the activities within the community."

Doyle said a trip to Louisville to see a development similar to Union Village convinced him. "They showed me the vision of what they've done there," said Doyle. "To see how it's become scalable and to see the people that are living there and what they've done with the retail around it. It made me a true believer that this is real."

For Q102 radio personality Jenn Jordan, one visit to Aberlin Springs made her want to move. "It's kind of crazy 'cause I wasn't looking to move anywhere. In fact, the idea hadn't even really crossed my mind."

She said she is ready to give up yard work and a big house. She has a teenage son with autism and believes the close-knit, farm-to-table living of Aberlin Springs is what she and her son need.

"Life is crazy. The world is crazy. And, when I come up here, I just feel like I can breathe," said Jordan, who met Leslie Aberlin through a special needs dance class their children were taking together.

"It's really a simple way for me to live the healthy kind of lifestyle that I want for the both of us," said Jordan.

Aberlin said she has a had several members of the same family buy homes in the community so that they can be close to each other.

"I think families are lonely," she said.

She hopes to keep them all connected by designing the community with one main loop road.

"We broke the development 101 rule by single-siding the road," said Aberlin. That means homes are only built on one side of the street. "Call it crazy, but it keeps everybody connected."

She also has some cottage homes arranged in pocket communities. Garages are in the rear, and the fronts of the homes face green space.

"That's why it seems so peaceful," said Aberlin. "You can walk around in there, say hello to your neighbors and you don't have the traffic."

Residents pay to be part of the farm's community-supported agriculture program. That pays for the workers to maintain the farm and also gives homeowners an allowance to access fresh produce grown on the farm and meats from farm animals.

"We have an edible forest coming on board which is right in the front," said Aberlin.

She said she thinks they can be planted anywhere, especially in cities that are food deserts.

"It starts with fruit trees, and then the fruit bushes and nut bushes," said Aberlin.

The idea is to not use artificial fertilizers while combining animals and vegetables on the farm. She also builds all of the homes with water purifiers and geo-thermal heating systems. The idea behind it all is healthier living.

"It was really based on health for me that this all made sense," said Aberlin.

She believes it will take three to five years before the development is completely built. They are currently building homes in phase two.

"My heart gets touched every time I come out here," said Jordan. "It just feels like freedom in a way that I haven't experienced in a really, really long time."