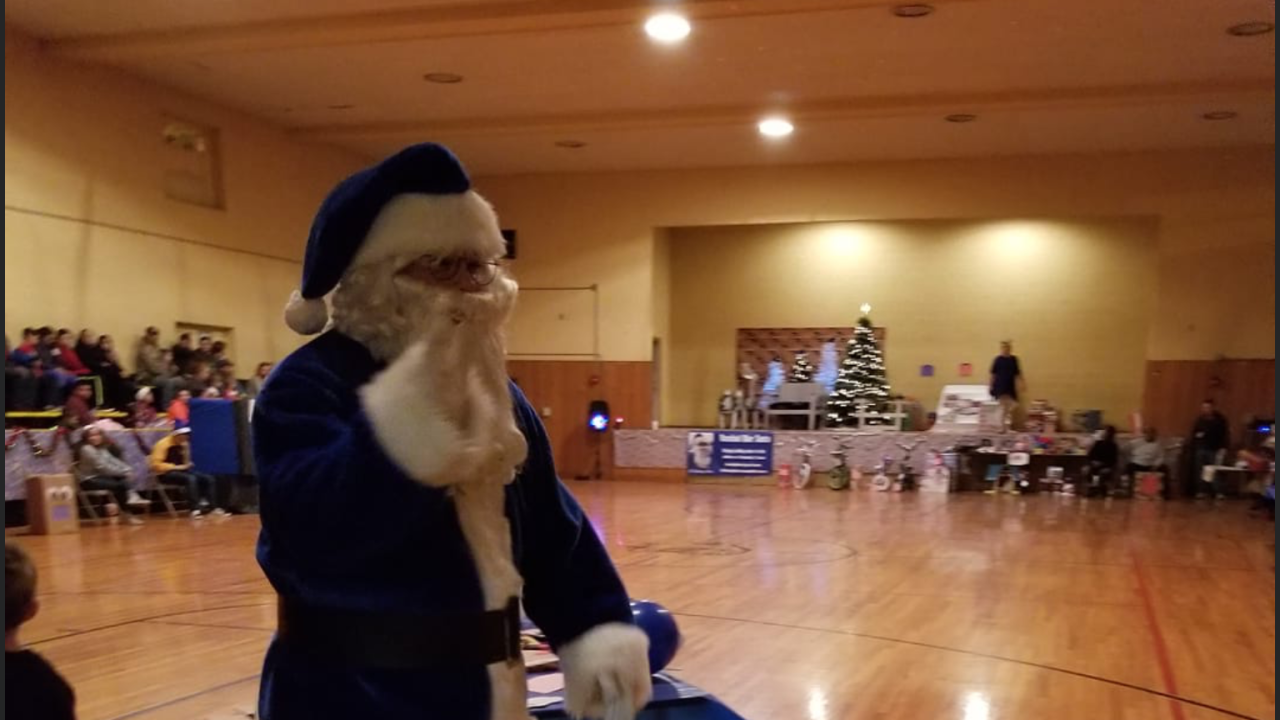 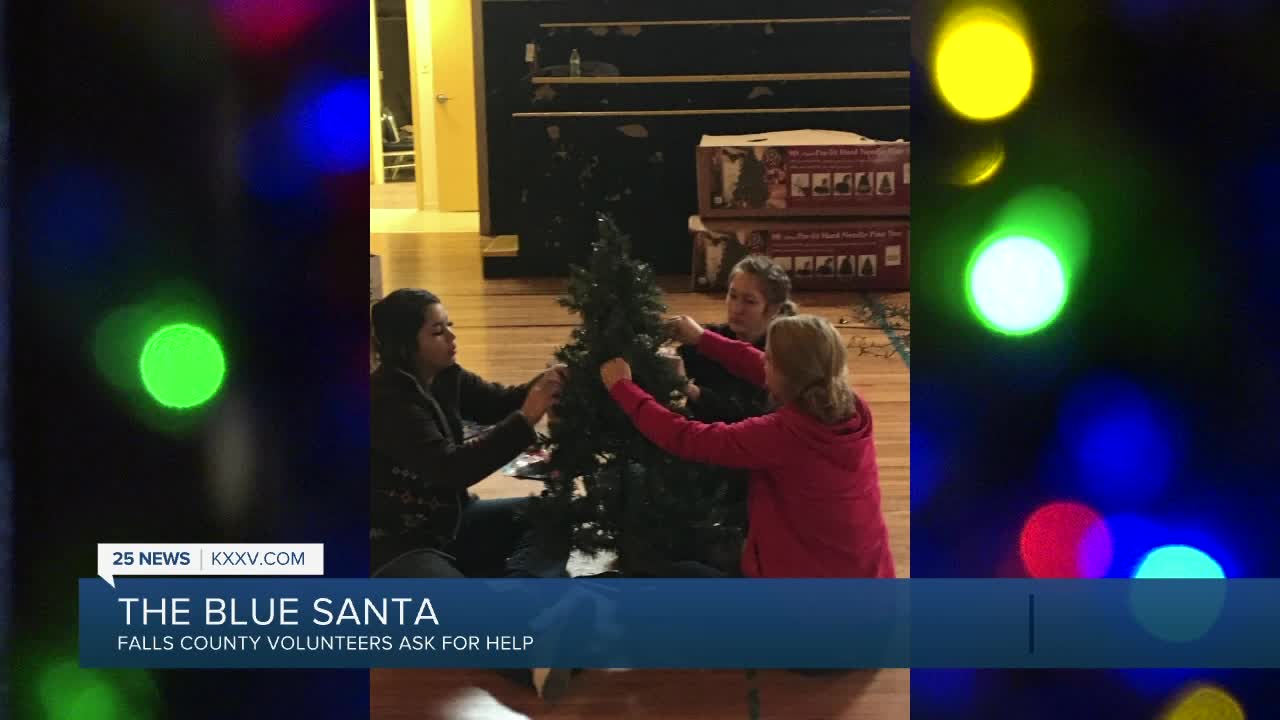 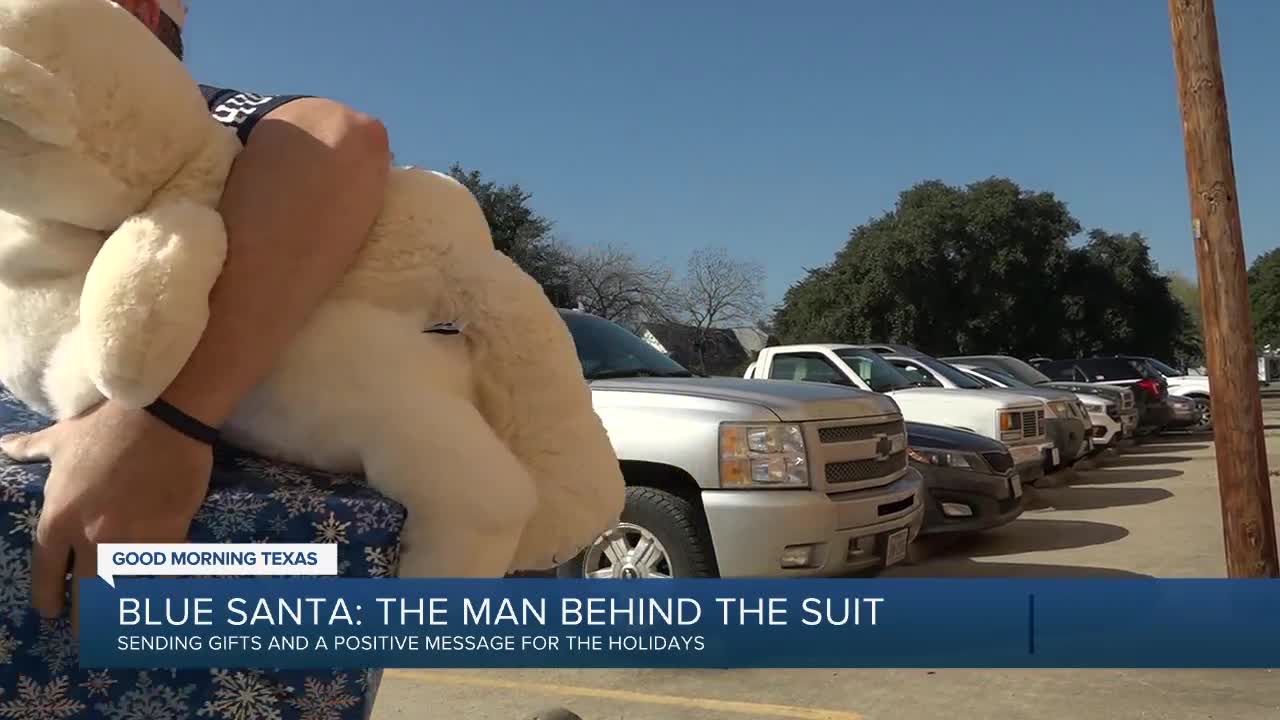 FALLS COUNTY, TX — You know Dasher and Dancer and Prancer and Vixen...

But you may not know... the mysterious blue Santa.

He appears this year, in lots of towns, presenting a positive message about the community and its law officers.

You might see him many places.... but to one community in Falls county, folks say he's become extra special.

they say, blue Santa, to them, means Christmas, and you can help.

Parker writes, Dear Santa, a jack-in-the-box is what I want for Christmas... another child... Barbies and an electric car.

Unfortunately, not every child in Rosebud, Texas deep in southern Falls County, will get what they want for Christmas.

"We want the children to have good memories of growing up here. It's such a small town, and that's why we started doing this," said "R. Buddy Blue" the man, who for the last 6 years, has put smiles on the faces of Rosebud's children... helping more and more each year.

"The program started out with about 10 families, and then it actually grew... last year we had over 3-hundred kids registered for the party," he said.

Blue Santa ends with a party on the 20th, but he begins his work before anyone even knows, lining up donors for toys, partners for fundraising like the Town Square Community Foundation, and getting folks on board with his Christmas vision.

It's worked. The Rosebud Volunteer Fire Department has adopted Blue Santa as it's biggest project of the year.

Firefighters collect toys and bring them to drop off stations early in the season, and continue right up until party time.

”The fact that we can give back to our community to surrounding communities is the biggest plus for us,” said Jay Schults of the Rosebud Volunteer Fire Department.

The toy drive ends with a "wrap party" on the 19th where adults cover the gifts in festive paper.... a real community event.

Once all the gifts get collected and wrapped, then they get to work on the big Christmas party and that takes place here at city hall in the gym.

...and then, blue Santa takes to the stage and the presents come out.

And the smiles go all around the room, and out across Falls County, creating a feeling of warmth and well-being.

The same kind of feeling Blue Santa wants to create all year long.

Because Blue Santa stands for the good guys... those that help when you need it most. Blue Santa wants to teach kids that his brothers and sisters in blue... the police... want to help, and they should too.

"I got stopped by a resident here in Rosebud, who said that his daughter couldn't stop talking about the Blue Santa," he explained.

It's the impression he hopes to make... that the folks in blue are the good guys, and among the ones that made Christmas happen in a community that doesn't have much... but a love for each other that takes the form of the jolly old elf, in blue every year... the embodiment of the true Christmas spirit in this little town on the edge of Falls County.

You can find him lurking around Rosebud City Hall... He's making a list, and checking it twice... you know why..... are you naughty, or nice?

This man in blue, bears a striking resemblance... and there's a reason for that.

"I was the red Santa's brother. the children have a little bit extra of gifts so you're the extra extra Santa yes, for extra, extra good kids, correct." said "R. Buddy Blue" as he's called. He and his helpers collect gifts through the season to make the season bright for children in Rosebud and Lott... two communities without a lot... but with love to share... embodied the the man in blue.

Now, this Santa, he's not just about gifts... he teaches lessons, life lessons about being a good citizen, and helping others... and teaching folks, his brothers and sisters in blue, stand for what's right and true.

"I'm in the parade, I drive the police car, and they know the Blue Santa represents law enforcement, as well... represents the good guys," he said.

Those good guys collect toys for every boy and girl every year.... This year the Town Square Foundation joined in... working alongside the fire department which adopted blue Santa long ago.

A community wrapping party precedes the a huge giveaway party in the city hall gym.

They transform this place into a winter wonderland where kids have activity stations to do things like write Christmas cards, write letters to Santa and make Christmas ornaments.

"Aw, they just light up I mean it's just awesome feeling for me, personally," he explained.

Warming hearts on cold December nights... and creating memories... memories that last.... and help people here remember... who the good guys are.

Many times, he says, it does.

"At least for me, personally, when I see the children, they actually grow up they're gonna remember... Oh, Blue Santa!"

Blue Santa, R. Buddy Blue, Santa's brother who stands for what's right and what's true... helping make a Christmas miracle, last a lifetime, by reminding us we can all be good and true all year long.

You still have time to donate to the Rosebud Blue Santa. They'll take donations at Rosebud City Hall up until the 19th.

However, he needs your help. This Blue Santa helps kids in both Lott and Rosebud have Christmases to remember.... that's hundreds of children.

This year, donations got off to a slow start, and they have until Friday to get as many gifts as they can for community kids.