President Donald Trump is carrying out his threat to "decimate" the Turkish economy, in the wake of his decision to withdraw U.S. troops from northern Syria.

In a statement, Trump said that he would be signing an executive order authorizing, "the imposition of sanctions against current and former officials of the Government of Turkey and any persons contributing to Turkey’s destabilizing actions in northeast Syria."

The statement goes on to say, "this Order will enable the United States to impose powerful additional sanctions on those who may be involved in serious human rights abuses, obstructing a ceasefire, preventing displaced persons from returning home, forcibly repatriating refugees, or threatening the peace, security, or stability in Syria."

The president had no public events on Monday and has remained holed up in the White House, taking to Twitter to defend his decision of pulling U.S. troops from Syria.

In a controversial statement, he announced he would rather use the money to defend the southern border of the United States, tweeting, "Some people want the United States to protect the 7,000 mile away Border of Syria, presided over by Bashar al-Assad, our enemy. At the same time, Syria and whoever they chose to help, wants naturally to protect the Kurds.......I would much rather focus on our Southern Border which abuts and is part of the United States of America. And by the way, numbers are way down and the WALL is being built!"

....I would much rather focus on our Southern Border which abuts and is part of the United States of America. And by the way, numbers are way down and the WALL is being built!

And as many people are witnessing disturbing scenes of mass atrocities and executions, Trump also tweeted that Islamic State prisoners could be "easily recaptured by Turkey and European nations." 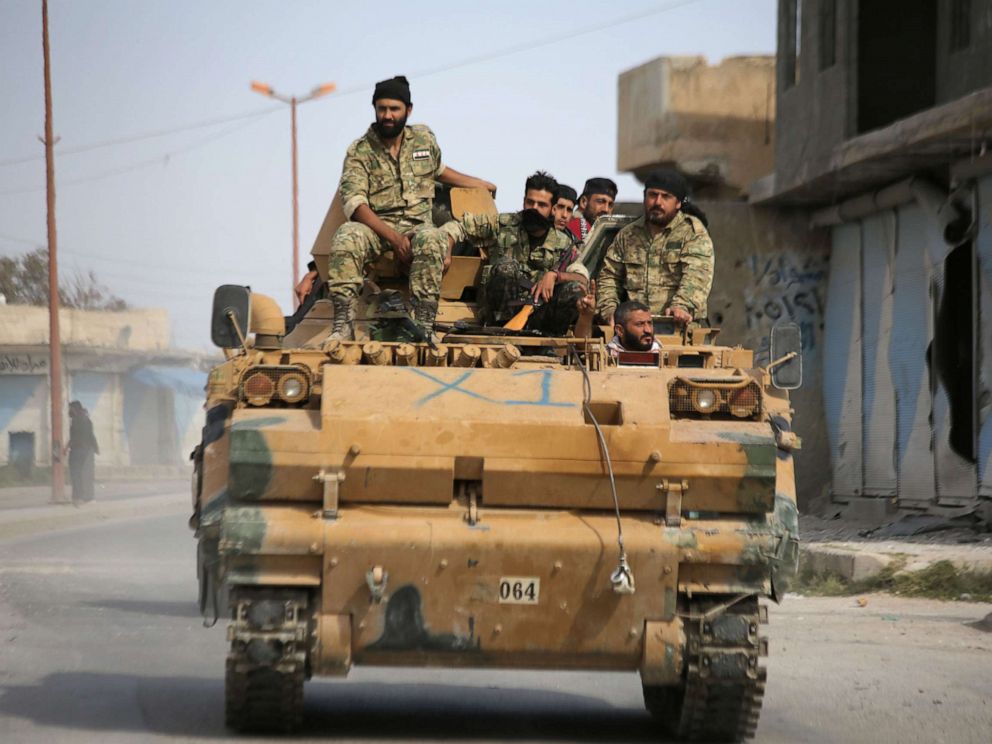 Trump also said in the statement that steel tariffs would be increased back up to 50% -- the level prior to a reduction in May.

"The United States will also immediately stop negotiations, being led by the Department of Commerce, with respect to a $100 billion trade deal with Turkey," the statement said.

On Sunday, Treasury Secretary Steven Mnuchin said that Trump was focused on the developing situation in Turkey, as reports of thousands of displaced citizens and escaped Islamic State fighters emerge.

"We are ready to go at a moment's notice to put on sanctions," Mnuchin said on ABC's "This Week" Sunday. "These sanctions could be starting small, they could be maximum pressure, which would destroy the Turkish economy."

A senior U.S. official confirmed to ABC News on Sunday that the U.S. was withdrawing its troops from northeast Syria. In his statement on Monday, Trump also confirmed ABC News reporting that "a small footprint" of U.S. force would remain to the south, along the border with Jordan and Iraq.