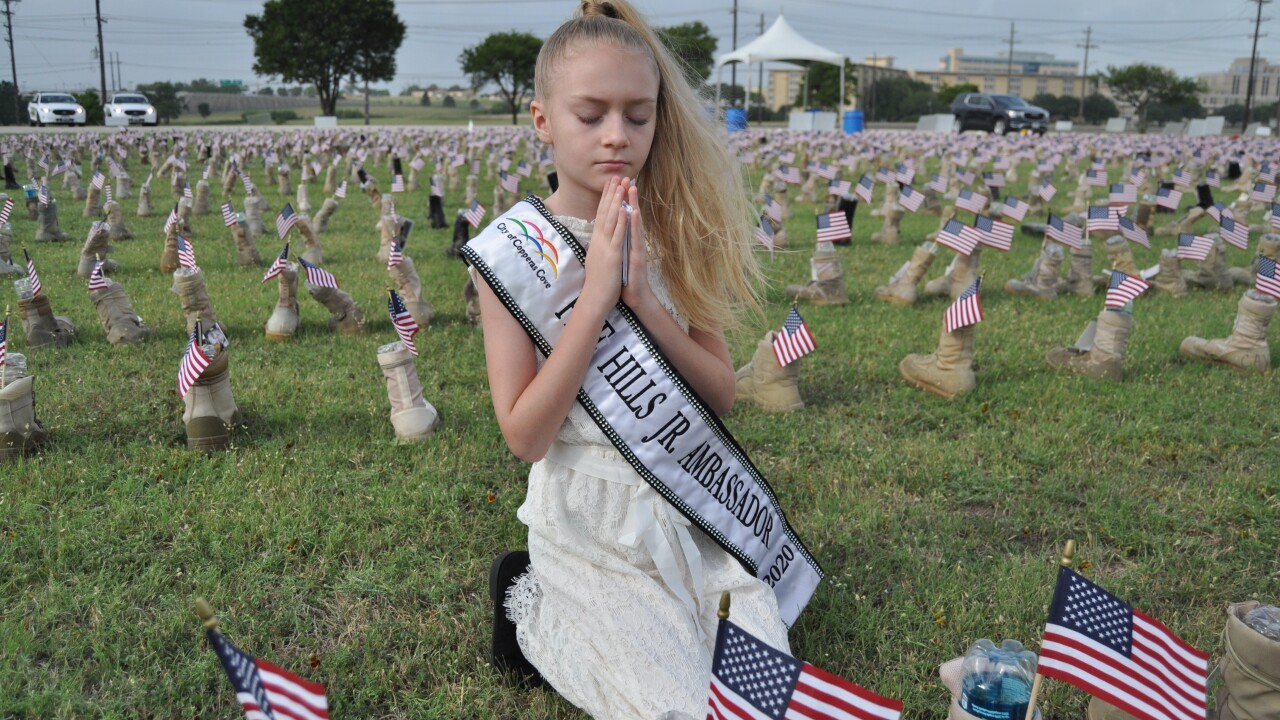 FORT HOOD, TX — These Central Texas children are spending the days leading up to 4th of July caring for the Fort Hood memorial that now contains more than 7,000 boots honoring service members of all branches of service that lost their lives serving in the military.

9-year-old Romella Spitzer realized very quickly how fortunate she is that both her parents, military veterans, are present in her life every day.

The reigning Preteen Miss Five Hills switched out the worn identification tags with new ones on combat boots the line the parade field in front of Fort Hood’s III Corps Headquarters at the annual boot memorial, erected every year for Independence Day.

As she read the names on the tags, she realized these soldiers served with her father and they paid the ultimate sacrifice for freedom.

“My dad had to recover their vehicle and their remains since an (improvised explosive device) took their lives,” the fourth grader said. “My dad had it hard in Iraq numerous of times, but he was able to come home unlike some other kids’ dads. I feel sad that some kids cannot see their parents anymore.”

For the fourth consecutive year, the Copperas Cove Five Hills royalty spent the 10 days leading up through July 4 caring for the memorial that now contains more than 7,000 pairs of boots honoring service members of all branches of service that lost their lives serving in the military.

Ms. Five Hills Sandie Johnson became emotional while volunteering at the memorial as she is married to an active-duty soldier.

“My family and I were heartbroken to see all the boots of the fallen soldiers and a somber feeling came over us,” Johnson said. “We pray for all the families who have lost their loved ones in combat.”

The father of Little Miss Five Hills Alaya Pringle is an active-duty soldier and her mother works on Fort Hood.

“It is important for us to volunteer as a family, to honor those who have served and fought for freedom,” Kila Pringle said. “As we strive to teach Alaya about community service, it’s important to recognize those who gave the highest sacrifice in service to our country.”

The titleholders ensure that American flags are inside each pair of boots, replace the service members’ photos that are worn by the sun or damaged in some way, and ensure the boots are straight and faced forward. They work in two-hour shifts through July 5 to maintain the memorial for public viewing.

“Honoring our soldiers who have fallen in the line of duty is so important because their sacrifice was to protect all of us. The fallen service member boot memorial is a reminder for all of us what the true cost of our freedom is,” Sawyer said. “Brave soldiers, who go into battle, risk their lives and this reality is so very real for me because my father went on many deployments during his service in the Army and every deployment meant he might not come home.”

The father of Little Mister Five Hills Jordan Hendrix, Jr. is active-duty military and his mother is a contracted athletic trainer on Fort Hood.

“Having our son help care for the boot memorial is just as important for us as it was for him,” Jordan Hendrix, Sr. said. “One of those boots could represent me one day and it could be my family coming to visit. Even at a young age, Jordan knows first-hand how it feels to have emotional ties to a service member.”

The Fort Hood boot memorial is open to visitors through July 5. The wearing of face coverings is a requirement on the military base.