'I owe it to the people that I was flying with,': Sole survivor of deadly plane crash continues to fight 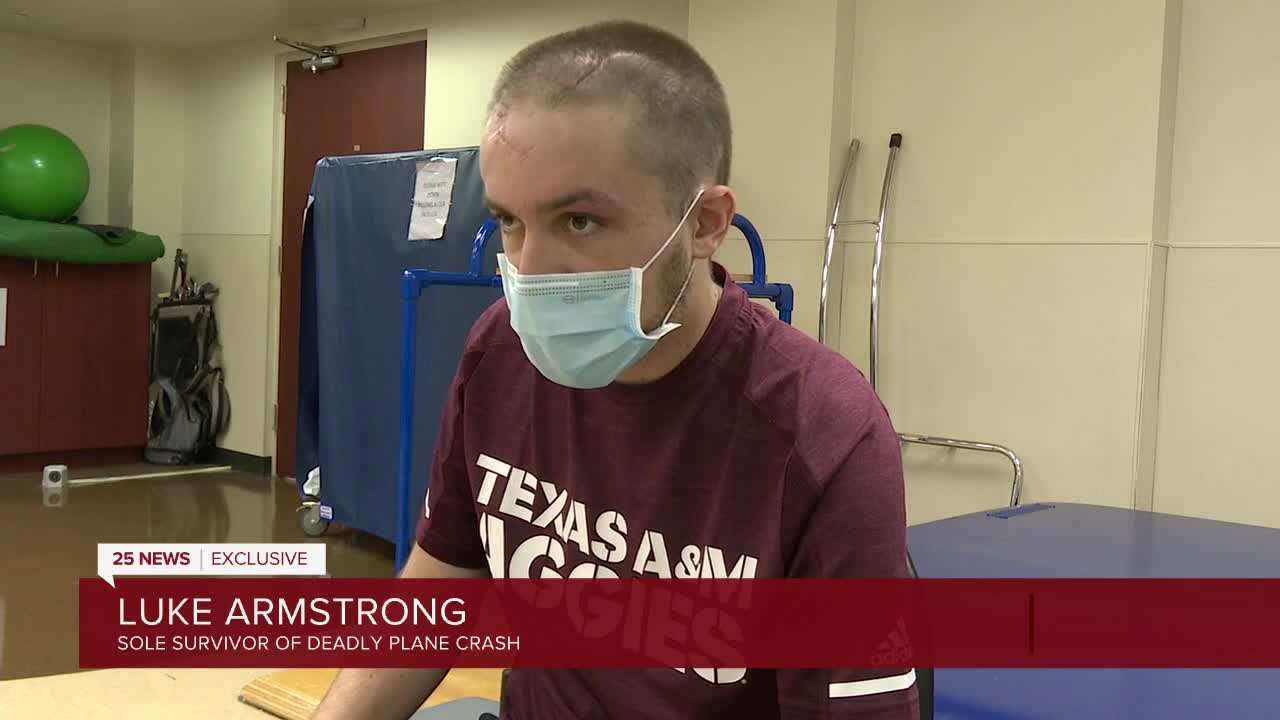 On August 30, Luke Armstrong became the sole survivor of a deadly plane crash at Coulter Airfield in Bryan. Six and a half weeks later, Luke says he owes it to the Walker family, who died in the crash, to get better.

BRYAN, TX — On August 30, Luke Armstrong became the sole survivor of a deadly plane crash at Coulter Airfield in Bryan. Six and a half weeks later, Luke says he owes it to the Walker family, who died in the crash, to get better.

Luke sustained skull and facial fractures as a result of the crash. Luke fought for his life and received acute hospital care at CHI St Joseph Health in Bryan.

“Based on the information I received and clearly how well he is doing overall, they [CHI St. Joseph Health] did a fantastic job of quickly addressing his acute medical needs,” said Dr. Christopher Falco, attending physician of brain injury medicine at TIRR Memorial Hermann Hospital and Assistant Professor of Physical Medicine and Rehabilitation at UT Health McGovern Medical School. “Identifying some of the complications that he has experienced as a result of the traumatic brain injury and quickly intervened on those, which if they had not, he would certainly not be progressing as well as he is now. So, I commend them for a job very well done.”

With an incredible team of doctors and nurses in Bryan, Luke was transferred to TIRR Memorial Hermann, the top rehabilitation facility in the state, one month after the crash. It's at the facility where he has been receiving extensive therapy.

“It’s been great. I really, really like TIRR. I am glad that we chose TIRR as our rehab facility,” Luke said. “All of the therapists are educated, intelligent, experienced, and most importantly for me, being young, they are young as well. I’ve got fellow Aggies on my therapist team, so I can talk to them about the football game or any other things relating to A&M.”

From speech to occupational and physical therapy, Luke is getting stronger every day.

“Rehab is going well. I’m expected to make a full recovery and so I try and work hard in all of the therapies every day. It’s not easy, but it’s worthwhile and I find purpose in it,” said Luke.

Cheering him on are friends, family, the Aggie community, and strangers from around the world. With over 6,000 followers on the Team Luke Armstrong Facebook page, Luke says the support he’s received is his motivation to make a full recovery.

“It’s my motivation. Knowing there are people that are watching me and counting on me and cheering for me is what keeps me going,” he said.

Luke is walking, even jogging in his therapy sessions with his fellow Aggie therapists. Dr. Christopher Falco is pleased with Luke’s determination to make a full recovery.

“We see that all the time in our patients, and I’m continually amazed at the human spirit and the determination to get better, but Luke is a great example of that and his family too. He has amazing support from his parents and family and without a doubt that is contributed to his rapid recovery,” explained Dr. Falco.

While progressing, Luke is preparing to leave TIRR and go back home to the Dallas area where he will continue extensive therapy.

“So, he still has a long road to recovery certainly. He is going to continue to need a lot of physical therapy and continued speech therapy, and that’s probably going to be an ongoing treatment plan before the foreseeable future for at least a few more weeks if not months,” said Dr. Falco. “But I think when all is said and done, he’s going to have a full recovery and he is going to get back to anything and everything he was doing before and wanting to do before.”

Luke understands the challenges ahead of him, but says he’s fighting for much more than just himself.

“Strong is apart of your last name, so I have to ask, what makes you, Luke Armstrong, such a strong fighter?” asked 25 News reporter Halle Jones.

“The support that I have received from friends and family and strangers is definitely what keeps me going. It’s definitely not easy, but it’s worthwhile and in some ways, I feel like I owe it to the people that I was flying with to make a full recovery and honor their legacy as best as I can with my life,” responded Luke.

Luke will walk out, or maybe decide to jog out, of TIRR completely on his own as he continues on his long road to recovery, determined to one day get back on his wakeboard.

TIRR has Luke scheduled for discharge on Thursday, October 15.