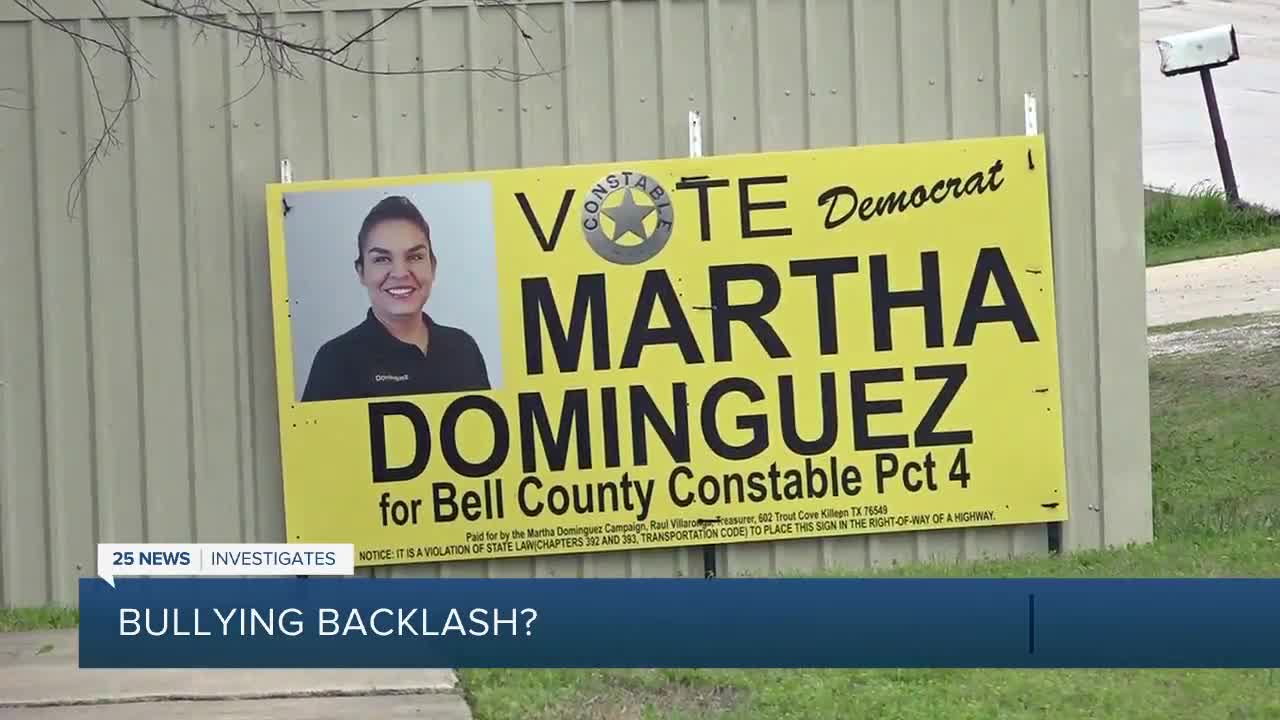 Campaign signs for Martha Dominguez, a candidate for Bell County Constable, Precinct 4, are targeting voters everywhere you look. But for Noretta Bush, she says Dominguez has been targeting her and her family, including her teen daughter, on social media for another reason.

BELL COUNTY, TX — It's political season. That means you're seeing campaign signs all over Central Texas.

Campaign signs for Martha Dominguez, a candidate for Bell County Constable, Precinct 4, are targeting voters everywhere you look. But for Noretta Bush, she says Dominguez has been targeting her and her family, including her teen daughter, on social media for another reason.

"Deputy Dominguez has told my daughter that she is ugly, fake and dumb on her Instagram page," said Noretta.

She says the bullying started shortly after Dominguez's professional relationship with her soon to be ex-husband, Chris Bush, took a turn.

25 Investigates repeatedly reached out to Deputy Dominguez for an on-camera interview, but she declined. We even showed up to the Constable's office where she works, but she still refused. Constable Melton shut us down when we started asking tough questions.

"I didn't do the background on her," said the constable.

"But he (Chris Bush) did," 25 Investigates' Joe Gumm responded.

"I think I'm just gonna cut this off now because I don't like the direction you're going with it," Constable Melton said.

"Why not? Isn't that a fair question?" asked Gumm.

"I don't know what's fair or not in your line of work," said Constable Melton.

"Well she's one of your deputies," said Gumm.

"Let me just say that at this point, I can confirm that there is no criminal investigation of any deputies, including Deputy Dominguez, from this department. There is an administrative case being looked at, and when it's completed, then it will be open to the public," said the constable.

25 Investigates found out that wasn't the only grievance filed against Dominguez. Attorney Ryan James, Dominguez's neighbor, has filed complaints against her as well.

"She came to my yard, trespassed, pulled out my sign that said that I've seen her breaking the law and damaged the sign and threw it on the ground in my yard," he said.

James told 25 Investigates Dominguez once put political signs in the easement, which is a code violation.

"It's shocking because she's a law enforcement officer whose job is to enforce those kinds of rules, and she should know better," said James.

He also told 25 Investigates Dominguez continued to block the fire hydrant between their houses with her Constable vehicle and her personal vehicle until he finally filed a complaint.

"It's shocking given that the house just seven down caught fire less than a year and a half ago," James added.

Dominguez is asking voters to elect her, so 25 Investigates wanted to know if the allegations we uncovered would influence their decision in the voting booth. 25 Investigates asked several voters in Killeen, without using Dominguez's name.

One voter said, "No I would not. If I'm aware of the online bullying, I cannot vote for someone who's a bully." Another voter told us, "We need to do all that we can to protect the youth and protect the young ones. If we don't do it, who's going to? If they apologized and owned it, I think that's something a lot of people don't do...then maybe I would consider it."

For Noretta, she says she isn't coming forward now out of spite, but she wants voters to know.

"This is letting the public be aware of the fact that Deputy Dominguez is not a good person. We have bad cops, we've seen them...and she is one of them, and I believe she's the only one at that department that has ever been like this," Noretta said.

In the meantime, 25 Investigates asked Chris Bush, Noretta's soon-to-be ex-husband, to go on camera as well. He chose not to, but did tell us in an email that he believes his wife speaking out is politically motivated and called it a "smear campaign." He also told 25 Investigates that Deputy Dominguez sent his daughter an apology for the Instagram posts. He said his soon to be ex-wife is the one "steadily harassing and fabricating stories."