Greg Abbott invoked mental illness after the El Paso shooting. There's been no indication that was a factor. 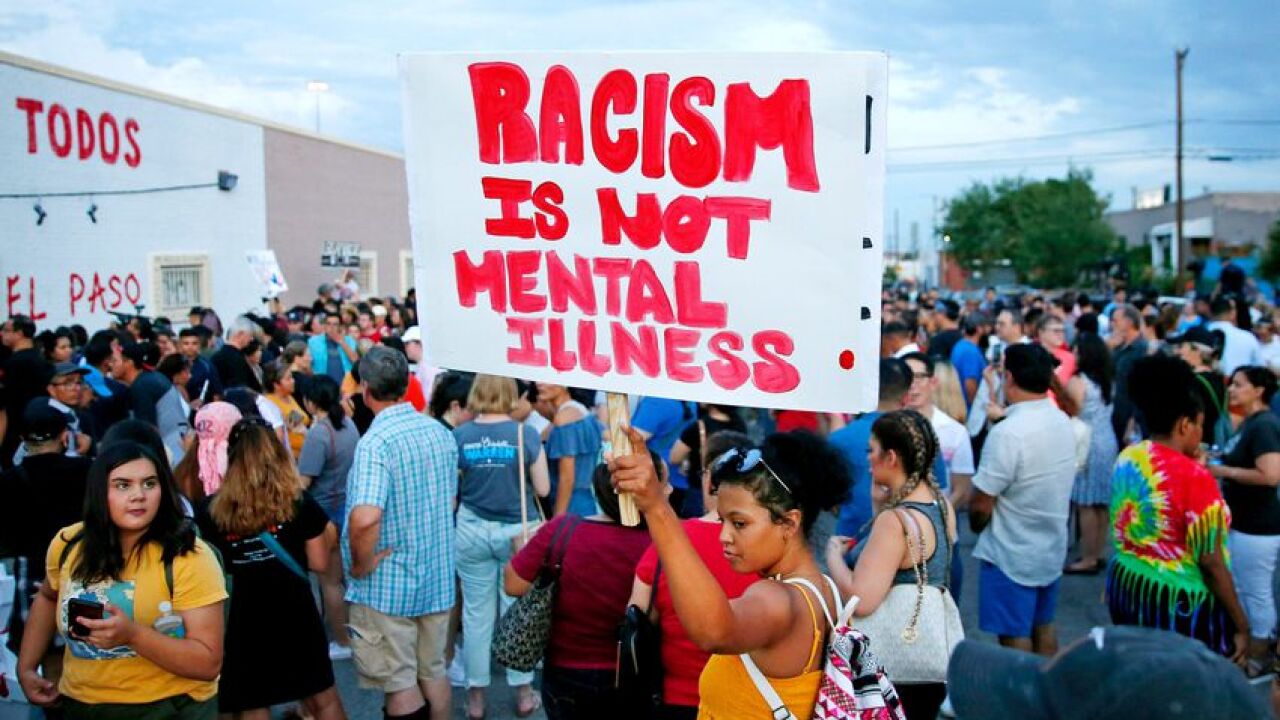 By Jolie McCullough , The Texas Tribune and Alain Stephens, The Trace Aug. 8, 2019

" Greg Abbott invoked mental illness after the El Paso shooting. There's been no indication that was a factor. " was first published by The Texas Tribune, a nonprofit, nonpartisan media organization that informs Texans — and engages with them — about public policy, politics, government and statewide issues.

Hours after a white gunman walked into an El Paso Walmart on Saturday and killed nearly two dozen Hispanic shoppers, Texas Gov. Greg Abbott addressed a room full of reporters in the border city and expressed grief and support for the community.

As high-profile mass shootings continue to erupt across the country — three of which occurred in Texas in the last two years — a reporter asked the governor what he planned on doing to ensure one doesn’t happen again.

Abbott, a Republican, hesitated, then spoke at length about how the state Legislature reacted to the 2018 high school shooting in Santa Fe, eventually focusing on what he said was the most agreed-upon need: addressing mental health issues.

“Bottom line is mental health is a large contributor to any type of violence or shooting violence, and the state of Texas this past session passed a lot of legislation and provided funding for the state to better address that challenge,” he concluded, referring to bills aimed at improving children’s mental health care.

Behind him, U.S. Rep. Veronica Escobar , a Democrat from El Paso, visibly stiffened, shaking her head slightly as Abbott connected mental illness to what appears to be an act of domestic terrorism fueled by a white supremacist ideology.

The next day, before a downtown El Paso vigil for the victims, she put into words what had been apparent on her face.

“I would also call on those who use mental illness as an excuse to please stop. Please stop,” Escobar told reporters, to light applause from those beginning to arrive for the service. “It further stigmatizes those who truly suffer from mental illness, and the fact of the matter is people with mental illness are far more likely to be victims of violent crime, not perpetrators.”

“This tragedy is not in vain if we can finally have a reckoning in this country as to what is really going on,” she added.

Abbott’s focus on mental illness is a common reaction among Republican lawmakers immediately after mass shootings, often mirroring public sentiment. But such focus comes to the dismay of mental health experts and Democrats, who argue that automatically pinning such horrors on mental illness is a way to avoid talking about issues surrounding gun violence and the rising prominence of white supremacy in the United States. In reality, the intersection between mental health and mass shootings is complicated.

In 2013, a Gallup poll found that 48% of Americans blamed the mental health system for failing to identify potential perpetrators of gun violence with that belief trumping other causes such as drug use or easy access to guns. In a similar CBS poll from 2017 , 68% thought better mental health screenings could prevent gun violence. And multiple high-profile shootings with ties to mental health issues have further cemented the connection into the minds of lawmakers and Americans — perhaps most notably with the Sandy Hook shooting, where the gunman killed 20 elementary school children and six school employees.

But research on mass killings and serious mental illness doesn’t usually back this notion, though results vary depending on how attacks and mental illness are classified.

A 2015 study of about 230 mass homicides since 1913 found that only 22% of the killers could be considered mentally ill. Examining only the killings from this millennium, however, the author, a forensic psychiatrist, considered 32% of the killers mentally ill. A 2016 study found only 15% had a psychotic disorder and 11% had paranoid schizophrenia. But smaller, more recent government reports indicate higher levels — a U.S. Secret Service report of 27 mass attacks in 2018 found that 44% of attackers had been treated for or diagnosed with a mental illness.

The rates of mental illness among mass murderers in recent studies do not surprise Greg Hansch, the executive director of Texas’ branch of the National Alliance on Mental Illness. He doesn’t negate that mental illness is sometimes a factor in large-scale attacks, but argues that even then it is not the sole cause and is often quickly used as a scapegoat for gun violence.

“We shouldn’t immediately jump to blaming mental illness, because one, it’s impossible to make that determination without having facts to back that up and, two, there are often other causative/aggravating factors that need to be explored,” he said. “Certainly in the case of El Paso, it seems like it was a hate crime.”

There has been no information released regarding the mental health of the suspected gunman in Saturday’s massacre. The 21-year-old allegedly did, however, publish a racist manifesto before the shooting in which he described the attack as a “response to the Hispanic invasion of Texas.”

Still, Abbott and Republicans nationwide again pointed to mental illness immediately after back-to-back shootings in El Paso and Dayton, Ohio. President Donald Trump told reporters on Sunday “these are people who are very, very seriously mentally ill.” In a White House address the next day, he said the country must reform mental health laws “to better identify mentally disturbed individuals who may commit acts of violence.”

“Mental illness and hatred pulls the trigger, not the gun,” he said.

That hatred motivated the El Paso gunman isn’t being debated in the wake of the shooting. But Texas Democrats say zeroing in on mental illness allows Republicans to ignore gun safety measures and racism.

“Let’s use our collective voice to keep the focus where it should be – that’s on the dual problem of lax gun laws and the white nationalist views that have been fueled by President Trump,” wrote the leader of the Texas House Democratic Caucus, state Rep. Chris Turner , in a memo to his colleagues. “We should not allow Republicans to try and change the topic to mental health, video games, prayer in school or anything else.”

Quickly after the Santa Fe shooting, which killed 10 people and left over a dozen wounded, Abbott brought together students, school officials, law enforcement, mental health experts, and advocates on both sides of the gun debate to propose legislation aimed at preventing future school shootings. He also created committees to study the issue while lawmakers were not in session to come up with proposals for the 2019 Legislature.

At the time, mental health experts cautioned Texas policymakers against using mental illness as the end-all-be-all solution to school shootings. The Senate committee sought out the very question of what propels mass shooters. After assembling an army of experts to testify, the committee released a 2018 report that showed mental health professionals had warned the government of a potentially flawed logic.

Dr. Andy Keller, CEO of the Meadows Mental Health Policy Institute , told senators that mental illness alone is “not a risk factor for violent acts” and that there is “no reason to believe focusing solely on this population will prevent future events,” according to the report. Another expert, Dr. Jeff Temple , the director of behavioral health and research at the University of Texas Medical Branch, testified that “mental illness is not a driving factor of violence,” adding that those suffering are “more likely to hurt themselves or be hurt by someone else than to harm another individual.”

As the 2019 state legislative session began in January, mental health concerns and school-hardening measures, like increasing police presence and installing metal detectors, were still the top priorities for Republican lawmakers, who hold majorities in both the state House and Senate. By the time lawmakers went home in late May, the Legislature passed sweeping legislation aimed at improving mental health care for students, arming more school employees and "hardening" schools.

Bills tied to gun control efforts went nowhere. Gun restrictions were, in fact, loosened in some ways , including a measure that forbids landlords from requiring tenants or guests not carry firearms.

“Nobody wants to talk about gun violence prevention measures. Nobody wants to talk about the fact that we need to do something … about the increasing racism in this country,” state Sen. José Rodríguez , D-El Paso, said before a Sunday vigil and silent march in El Paso. “On the other hand, I want to tell you that there were a whole slew of bills that were championed by the state leadership … that now allow, for example, guns in your churches, that allow more guns on campuses.”

Abbott told reporters on Saturday after his initial press conference that it was too soon to talk about politics.

In Ohio, just two days after the Dayton mass shooting, the Republican governor proposed a “red flag” law that would allow authorities to remove guns from people a court deems dangerous. President Trump has called for a similar policy at the federal level. Such a proposal fell flat at the feet of Texas Lt. Gov. Dan Patrick after the Santa Fe shooting.

In the wake of El Paso, Abbott said Wednesday that the gunman didn’t appear to exhibit any red flags, but announced there would be a new set of roundtable discussions this month to address potential solutions.

At Sunday’s vigil, El Pasoans showed they are ready for change. People filled the streets the evening after their city was attacked, carrying handmade signs that expressed pain, but also frustration with the politics surrounding such tragedies that were now all too real for them.

Among hundreds of grieving community members marching in silence downtown, one woman held up a sign written in bold, red marker: “Racism is not mental illness.”

Disclosure: The University of Texas Medical Branch has been a financial supporter of The Texas Tribune, a nonprofit, nonpartisan news organization that is funded in part by donations from members, foundations and corporate sponsors. Financial supporters play no role in the Tribune's journalism. Find a complete list of them here .

This story was published in partnership with The Trace , a nonprofit newsroom covering guns in America.

This article originally appeared in The Texas Tribune at https://www.texastribune.org/2019/08/08/el-paso-shooting-greg-abbott-mental-illness/ .