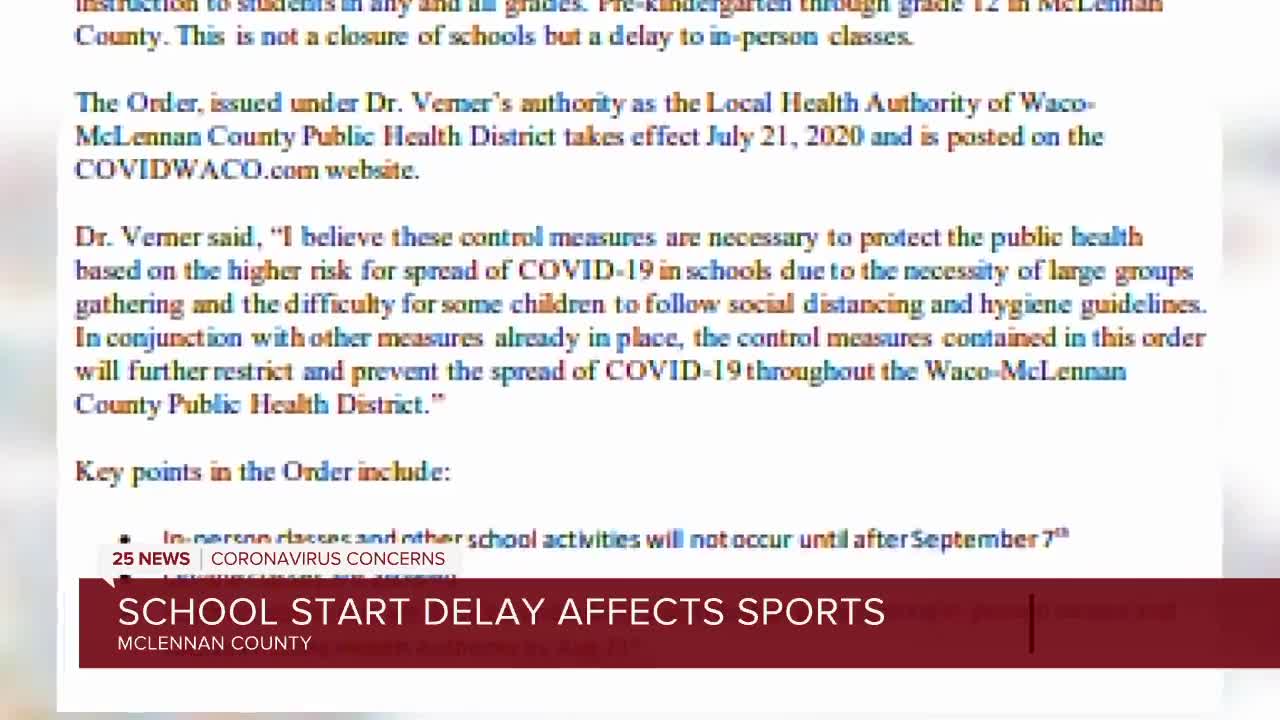 Hours after the University Interscholastic League (UIL) released plans for fall sports to resume, the McLennan County Public Health District issued an order pushing back in-person classes and all school extracurricular activities for another five weeks.

Wednesday morning a group of athletic directors and head coaches gathered at Midway’s indoor facility to meet with County Commissioner Ben Perry and discuss the ban that would directly impact practices and games for every program within the county.

After the UIL approved a plan for fall sports to resume on Tuesday morning, some coaches and athletes were getting ready to begin their seasons in just a little over a week and a half.

“Things are not always go your way, so what are you going to do? You can’t throw in the towel. That’s again what I try to tell these kids. All we can do is what the UIL tells us what we’re going to do. If they change their mind and do something different? Then we will adjust and we will keep moving forward,” said Kevin Hoffman, Mart Athletic Director and Head Football Coach.

Now, coaches and athletes in McLennan County are having to once again adjust.

Class 1A through 4A would have been able to continue as scheduled before the Waco-McLennan County Public Health District issued the order delaying high school activities. Now, many programs across the county will lose games in their season and fall behind other district opponents in surrounding counties.

“We’re in this business to help kids, to help raise kids, to educate them, and I think all coaches as educators just want to do what’s best for the children. We might be disappointed, we might not be disappointed, but again it’s about the safety of the kids,” said Keith Stifflemire, Riesel Athletic Director and Head Football Coach.

Various athletic directors met with county commissioners to discuss the ban and voice their concerns.

“There were some concerns with how the order was sent out, and we are gracious the county commissioner was willing to come out and listen to our concerns,” said Coach Stifflemire.

According to the UIL, Class 5A and 6A will have to wait until September 7 to start their seasons, but the ban prohibits all programs in the county from practicing or gathering for team meetings.

“They are going to take the information that we presented in the statistics and how we have been taking care of the kids this summer, and so we just kinda felt like we needed to have our voice heard,” said Coach Stifflemire.

It is important to note that this was just a meeting. No decision was made, rather it was an effort for local coaches and athletic directors to communicate directly with the county to understand the ban, while also discuss how to provide additional safety measures to participate in their sports this fall.