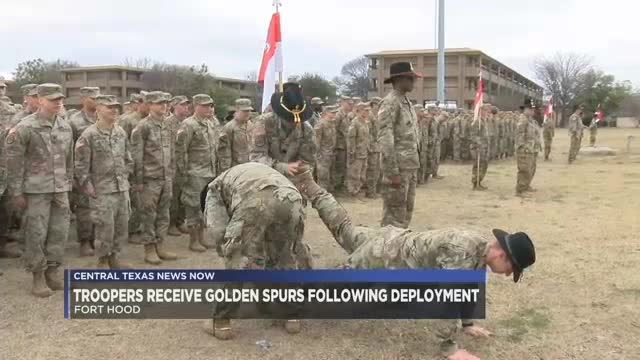 FORT HOOD — After a nine-month deployment in support of Operation Inherent Resolve, troopers in the Field Artillery Squadron within the 3rd Cavalry Regiment are back at Fort Hood.

"The hardest part was being away from home, but again it was well worth it. It was a struggle, but now we are back," 1st Lt. Jordan Cirenza said.

A ceremony was held on Thursday to thank the troopers for their sacrifice.

"I think thank you is probably some of the most important words you can say to a person, a lot of people do stuff and we avoid telling them 'thank you' or we just aren't very good at it. So in the army, I think we have a good way to do that, we give them awards, we pin medals on their chest or hand them a coin to tell them thank you," Lt. Col Alex Lee said.

In addition to medals, the men and women of the Field Artillery Squadron, 3rd Cavalry Regiment received gold spurs, a tradition that dates back 173 years.

"When you deploy to combat you earn your golden spurs which are to signify that when called, you went to answer the nations calls and did what you were told to do," Lt. Col. Lee added. "We treat them like we are inspecting them and make sure they are on right and you kind of horseplay a little bit more fun for them all just to tell them hey, great job, thanks for being a member of the team and a member of the gold spur community."

Troopers in the squadron said the honor was one they were happy to receive.

"I am very proud and I will be even prouder to hang them up someday down the road and out my Stetson up there and say that I got to serve in a cavalry unit," 1st Lt. Cirenza added.