Texas A&M ranked as a top 'Free Speech' institution, according to FIRE 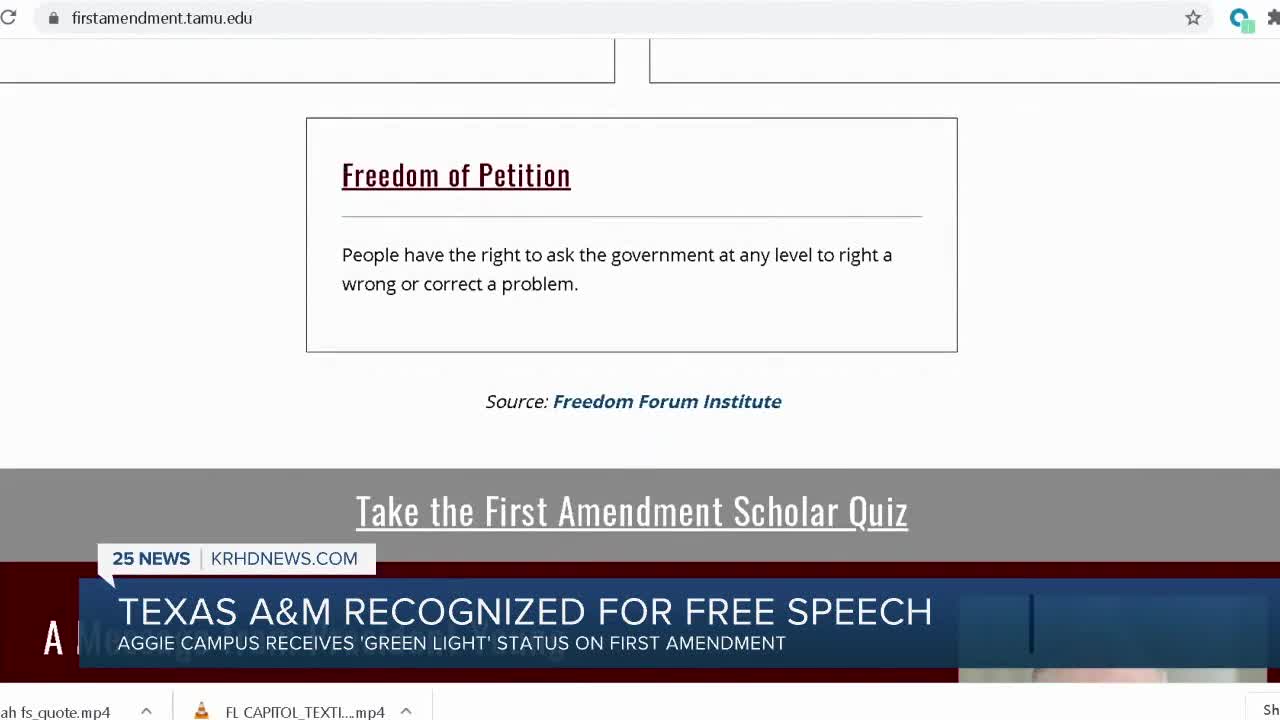 COLLEGE STATION, TEXAS — The Foundation for Individual Rights in Education, or FIRE, has recently released it's 2020 College Free Speech rankings. Texas A&M University made the top of the list.

The First Amendment of the United States Constitution protects the Freedom of Speech, Freedom of Religion, Freedom of the Press, Freedom of Assembly and Freedom of Petition. Texas A&M was ranked among 55 other institutions nationwide on its climate of free speech on campus.

Dr. Daniel Pugh Sr, Vice President of Student Affairs, at Texas A&M says the 'Green Light' status is a reflection of years worth of work. According to FIRE, a Green Light status is awarded if a college or university's policies do not seriously imperil speech.

The organization also says a "green light does not indicate that a school actively supports free expression. It simply means that FIRE is not currently aware of any serious threats to students’ free speech rights in the policies on that campus."

"We heard the legislature loud and clear in 2018 and we needed to make sure we were there," Pugh Sr said.

The Texas Senate Bill 18 protects expression on campus and guarantees every campus must have a traditional public forum. Pugh Sr says A&M already had this in place prior to the bill.

"We also started a new team. It's called ARRT, the Activity Resource and Response Team. That team that we developed in 2018 is designed to help students engage in expressive activities to the best of their abilities," Pugh Sr added.

As part of their on-going efforts to emphasize the importance of free speech, Texas A&M has also developed a First Amendment website.

".... and as we begin to activate that and put more educational materials out there we push that out to our students so they know what their rights are," Pugh added.

"A lot of people here are conservative, but there's also a lot of variety of different types of opinions and ideas that make A&M what it is," Christiana McGowin, a Freshman at TAMU said.

The Freedom of Expression is also noticed campus-wide.

"Here at A&M, we have the option every day to express ourselves as we feel and anything we believe we are able to portray anywhere on campus. You can walk around and find different groups for anything you are interested in," Dillon Carter a member of the Aggie 2022 class said.

A&M student Noah Cortinas says there is an open and friendly political dialog between different views on campus.

"I see the Trump organization. I see the Biden organization out here every week. They get into a lot of dialog with each other but it’s always super respectful," Cortinas said.

For its efforts, Texas A&M is the only Texas school to receive the Green Light designation from FIRE.

"I think for us to really make a difference we need to make other Texas schools become more compliant with what the first amendment says," Pugh Sr added.

Pugh Sr says there are nearly 1,000 student organizations at Texas A&M. Last year and pre-COVID, there were around 30,000 assemblies in Rudder Plaza of students expressing their First Amendment rights.