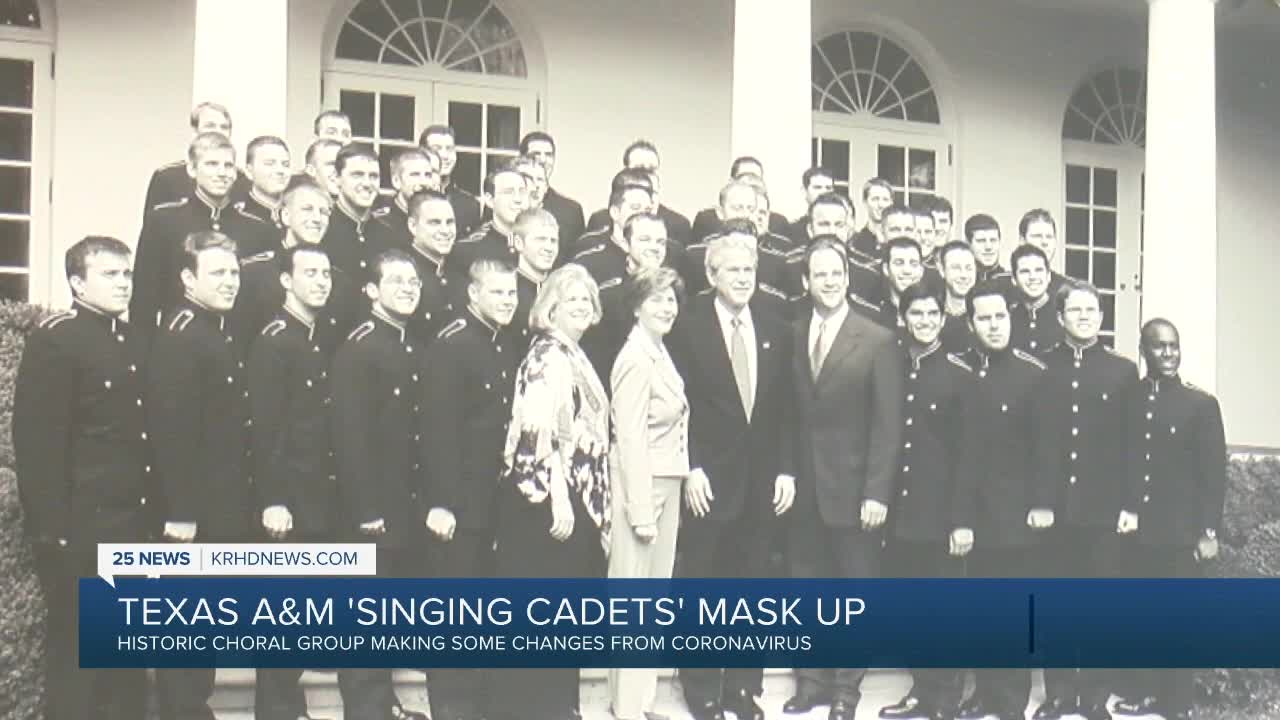 COLLEGE STATION, TEXAS — Masks have now become an everyday accessory for us all. One historical group at Texas A&M has had to adapt in a major way.

The Music Activities Center is also a place that has had to adapt to the COVID-19 pandemic. The concert band hall now has its music stands spaced out every six feet, while some rooms have been capped at 50 people.

Singing without a mask is now something he will never take for granted.

"For one, you are hearing a lot more of your voice than the voices around you. You don't hear the sound carrying as much throughout the room," Emmert added.

Even though singing with a mask has changed a lot of what he knows, he is still singing his way through this difficult time.

"We still show up every day. We still sing with the same energy, and we just kind of hope we will eventually get through it," Emmert said.

Since the pandemic began, many events for the group have been place on hold or even canceled. Emmert says while it is disappointing, they are not hanging their heads just yet.

"Because the fall semester is very busy, for we do a lot with the Aggie football team, a lot with Veteran's Day, things like that, and we do have a 10-day winter tour over Christmas break and all of that has been taken away," Emmert said.

David Kipp, Director of Choral Activities and Director of the Singing Cadets, is in his 26th year with the group. He says leading these students and representing Texas A&M is a dream come true.

"I love what I do. Working with the Texas A&M Singing Cadets is s dream job for me," he said.

Kipp says while none of the Cadets are music majors, the purpose of the Singing Cadets is to enhance the public relations of TAMU and to develop disciplined leaders of character.

Kipp says during the time of what he would consider to be a six-month spring break before they were reunited, the music became healing for them all.

"We are very fortunate to have a university that is supportive of what we do and believes in the purpose and mission of what we do. They are stellar gentleman. They are the best recruiting tool that Texas A&M has," Kipp added.

As history tells it, the Singing Cadets began as an all-male glee club in 1893. It's one of the oldest student organizations, right under the Corp of Cadets.

Over the years, the Singing Cadets have transformed to be one of the top collegiate choral groups, performing in front of more people across the state of Texas and throughout the United States.

"It's a blessing to still be able to rehearse and have the facilities that TAMU has provided in order for us to be able to do that. Just singing behind masks creates challenges. I am used to a very close knit group and them standing close to each other and a lot of vitality and energy that comes from that. What I am hearing now is guys are listening more," Kipp said.

"What I am hoping this is doing is actually making people listen and become better individual singers, so in the time, hopefully in the spring, when we do come back together as a group, they are actually stronger singers," Kipp added.