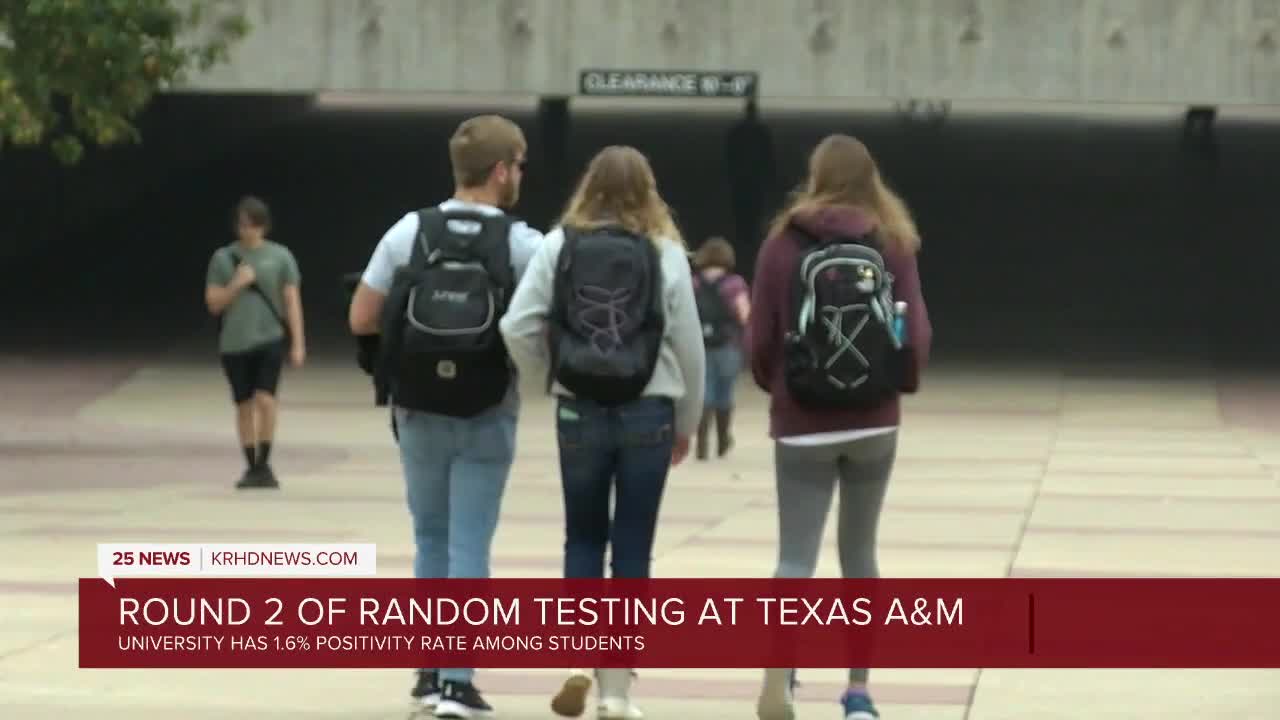 Round two of the random COVID-19 testing program at Texas A&amp;M has revealed a dramatic drop in positivity rates among students.

COLLEGE STATION, TX — Round two of the random COVID-19 testing program at Texas A&M has revealed a dramatic drop in positivity rates among students.

“We’re really happy with the results. What it shows, I think, is again the continued vigilance by our students that are really responding well,” said Greg Hartman, Senior Vice President and Chief Operating Officer of Texas A&M Health.

Just last week, senior Katherine Garcia was randomly selected to be tested as part of the program.

In the first round of testing, results showed a 3.6% positivity rate, which is now down to 1.6%.

Hartman says in round two, they targeted students who they thought were more likely to be positive.

“So the fact that they [the numbers] still came down even though we had a little more targeting towards those who we thought might be positive is even a better sign that we are doing a good job on campus,” he said.

That good job is translating even off-campus, as the second round results also demonstrated that college students are not spreading the virus to the greater Bryan-College Station community.

“We also see from our testing in the community, we don't see a whole lot spread from the student population into the community which is also something we are keeping a close eye on so that's another really good sign,” said Hartman.

In each round of random tests, the university invites 9,782 students to participate in the program. In round two, 71% of students responded to the invitation.

“Then they have to fill out a questionnaire and then there are reasons why they may not be tested for a variety of different reasons,” explained Hartman.

“So, I couldn’t take part because I’m 17 and I guess you have to be 18+,” said freshman Jassan Delsordor.

Eighty percent of respondents were considered eligible and just over 60% of those eligible were tested on campus. With results from round two, the university says positivity is not higher among students attending in-person classes.

“Whether a student is doing everything online, living in Bryan-College Station but taking classes virtually or they’re coming to class for some of the time, it really didn’t make a huge difference so that's a good sign,” said Hartman.

Round three of the testing program is underway with another pool of 9,782 students being invited for testing this week.

The program will continue throughout the semester to help identify transmission hot spots on campus.