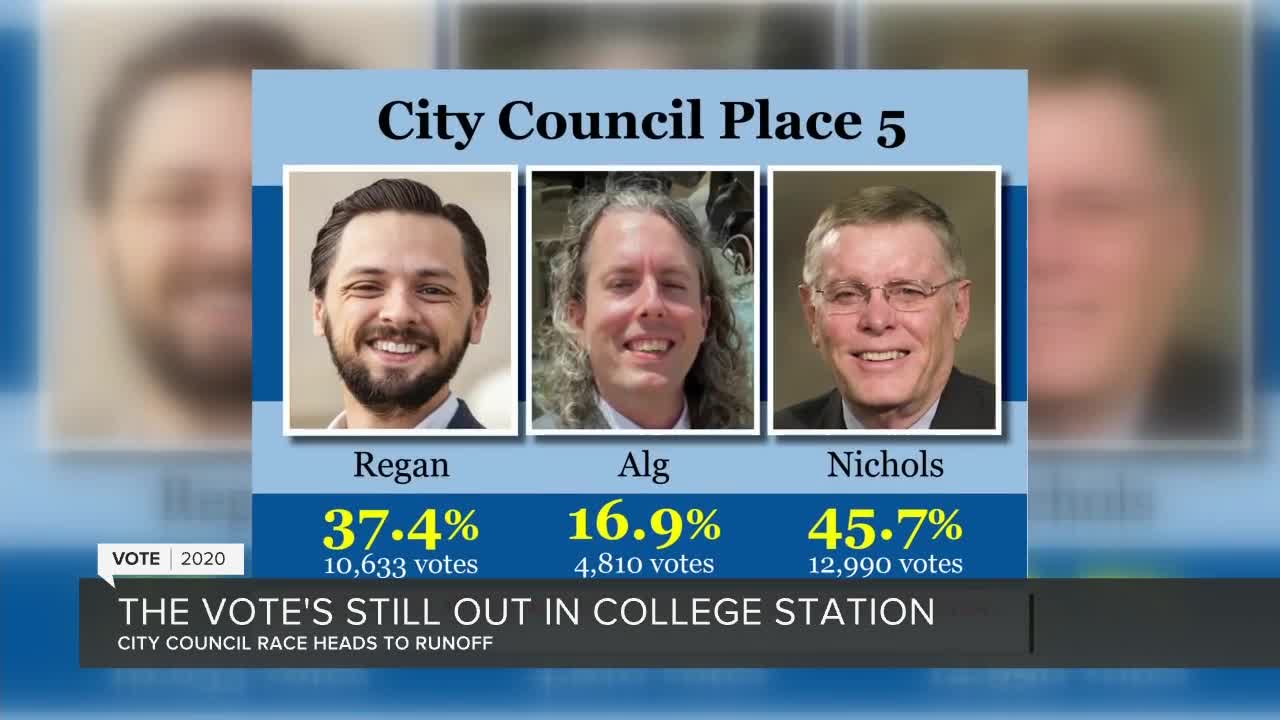 COLLEGE STATION, TEXAS — While the 2020 general election may be over, College Station City Council still has a seat left to fill. The city council voted unanimously to set a runoff election for Place 5, which will be held on Tuesday December 15.

Incumbent John Nichols led in the race with the most votes. However to win the seat outright, a candidate needs to cross the 50% plus one threshold. Nichols gained nearly 46% of votes, while Craig Regan posted 37% of votes and Brian Alg had 17% of votes.

"In a three way race... I wasn't surprised to be in a runoff. Place 5 was the very last item on the ballot... on a very long ballot," Nichols said.

On Thursday, the city council set a date for a runoff featuring two candidates with the most votes, Nichols and Regan.

While voter fatigue is a real factor on whether or not voters will vote again next month, residents says voting locally is important.

The two candidates believe residents will make the commitment to vote again, and say it's important that they do.

Craig Regan says the feedback he's received from the community prompted him to make his name known.

"We've had home ownership rate in this city fall from 54% to 36%. We have had taxes raised to 24%. We have had utility rate increase, and people want to know where their money went. And so I don't think it’s so much about me. I think it's the tax payers who want to see some minor adjustments on city council, and I think they found a vehicle in me to do that," he said.

When asked why voters need to show up at the polls again, Regan says it's simple.

"Just to remind them that we have issues in the city that deal with their everyday issues. Taxes, utilities rates, these are their everyday costs. It's not about energizing or raising the passion of voters. It's reminding them that city council is the most important elected office that they usually vote for," he added.

Policy and budget are two significant items city council members are responsible for as the oversight authority for the city.

"Discipline, business recovery, neighborhood stability and integrity. Those are the three main platform planks that I have, and I intend to work towards that and intend to continue to work on those in the future," Nichols said.

Though the general election may have past, many important local decisions and issues are still set to be settled in upcoming elections, including the runoff on December 15.

"These are local decisions that have a direct impact on businesses, on the university and on our everyday life, and I think it is important to voice our opinion," Charlot said.

Early voting will run from November 30 thru December 11 on weekdays only. Voters can head to either College Station Utilities Meeting and Training Facility or the Bob and Wanda Meyer Senior and Community Senior to cast their ballot.