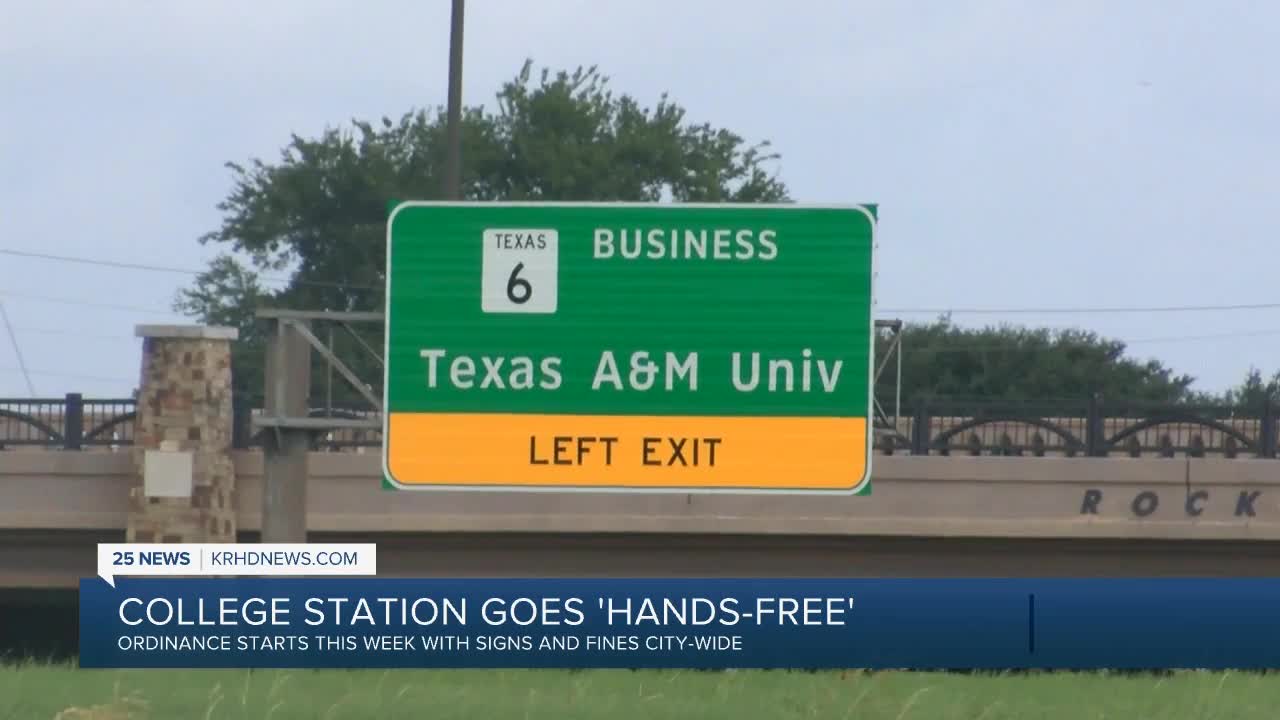 COLLEGE STATION, TEXAS — Changes are coming to College Station drivers and it could affect you if you are someone who uses the phone while driving.

By the end of the week, you should expect to see nearly 30 signs displaying the new 'hands-free' ordinance throughout College Station.

The goal of the ordinance is to decrease crashes, injuries and deaths on the roadways.

The National Highway Safety Administration estimates 9 percents of all drivers are using their phone at any given time and 4 of 5 crashes are caused by a driver's lack of attention to the road.

"They can be violent. They can cause injuries. They can cause deaths. Anything that we can do to reduce any form of distracted driving is good and should be encouraged and we ask to be safe, just drive," College Station Police Department's Tristen Lopez said, in regard to vehicle crashes.

Officer Lopez says the new ordinance is similar to the last one introduced in 2017 with the main focus being, you cannot have a cell phone in your hands while you are driving, but he says there are a few specific exceptions.

"That's if you are at a complete stop, the car is not moving like you are at a stop light or red light, we just ask that in that case, you pay attention so when the light changes you move and you are not obstructing traffic and if its an emergency and you need to call emergency services and there's an exception if you are changing music and that is required by state law," Officer Lopez said.

City Council passed this ordinance in February earlier this year, but due to the pandemic and the uncertainty of funds at the time, the project was on hold.

The signs are now being placed around the major roads that serve as a gateway to the city.

"Even if you are talking on the phone with a hands-free device, it still causes what's called attention blindness where it takes the attention from driving your car and places it on something else," Officer Lopez added.

Officer Lopez says distractions are what contribute to collisions and crashes. Driving distracted is also an opportunity where you could miss a pedestrian, a child or bicyclist.

A few TAMU students say an ordinance with a penalty may not eliminate texting and driving entirely, but a fine is enough to make someone think twice.

"Incentives change behavior and so I see something like money or a fine will basically provide that incentive. Our phones are just designed now a days to always want our attention and that is not good when we are driving," Emi Sanchez, an A&M student said.

"So an incentive to have to pay money if you are on your phone...that would make people be more conscious when driving," Arkadia Berdich, another A&M student said.

According to the Texas Department of Transportation, in 2019, the total number of crashes on Texas roads were 561,582 and of those 97,853 or 17.4 percent involved distracted driving. Those distracted driving crashes in Texas resulted in 378 deaths.

Officer Lopez says distracted driving is deadly driving and he wants your main focus to be on the road.

CSPD says once all of the signs are installed, they will begin their enforcement.

The department is offering a 30-day educational grace period and will give a warning, but after the grace period, citations may occur.