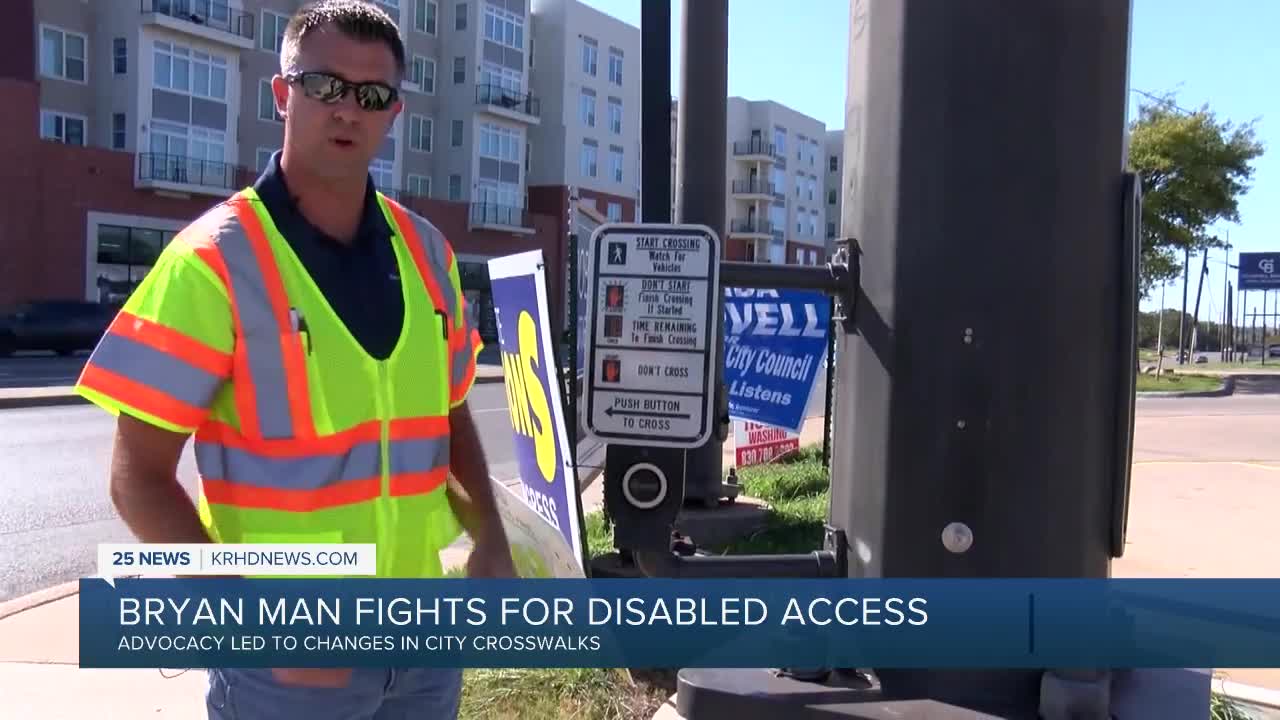 COLLEGE STATION, TEXAS — City workers in College Station recently teamed up to improve the accessibility for a young man in a wheel-chair at a busy crosswalk intersection.

The intersection of Texas Ave and University Drive is probably one of the busiest intersections in College Station, and it can be dangerous for anyone to cross the street, especially someone in a wheelchair. It may be even harder if you are unable to easily reach the pedestrian crosswalk button.

Kristen Cox, mother of College Station resident Kyle Cox, says her son is a born advocate, not only for improving his own life, but improving the lives of others in a similar situation as well.

"As you can see... it now is reachable for people in wheelchairs," Kyle Cox said in reference to a crosswalk button now extended so he can easily access it.

"He is no longer using this (crosswalk), but he is constantly worried about the people who are. He sees things.. he knows people... he's on campus doing things for advocacy and I am just so proud of him," Kristen Cox, Kyle's Mother added.

The crosswalk is at an intersection near Texas A&M. Garrett Martinek, Traffic Engineer with the City of College Station, said a request came into the City Manager's Office when Kyle had difficulties trying to obtain the right of way.

"It did meet requirements.. the reach distance, but after coming out at evaluating the situation and determining that we could make some improvements," Martinek added.

The engineer said the answer to those improvements were internal and could be constructed from parts within their own traffic shop.

"We created this extension bracket which brought it out about 12-16 inches, which allowed Kyle to come out and access it easier without any complications," Martinek added.

Martinek said some situations can take a little more time, but this project only took two weeks.

"With everything going on right now, anyway that we can improve someone's accessibility, even though this location did meet, it barely met, but now not only for Kyle he can use the intersection easier but anybody else," Martinek added.

Kyle is a Texas A &M and Bush School graduate and says teaming up with the city felt pretty good.

"It feels pretty good to see progress.. it's a start and there's a lot of work to be done to make the city accessible, but its feel good to know that there is progress," Kyle said.

Kyle says altering this one crosswalk button is just a start and he hopes in the near future there may be technology developed for people who cannot reach extended crosswalk buttons to get the assistance they need.