Bryan's Midtown Park progressing along and on pace 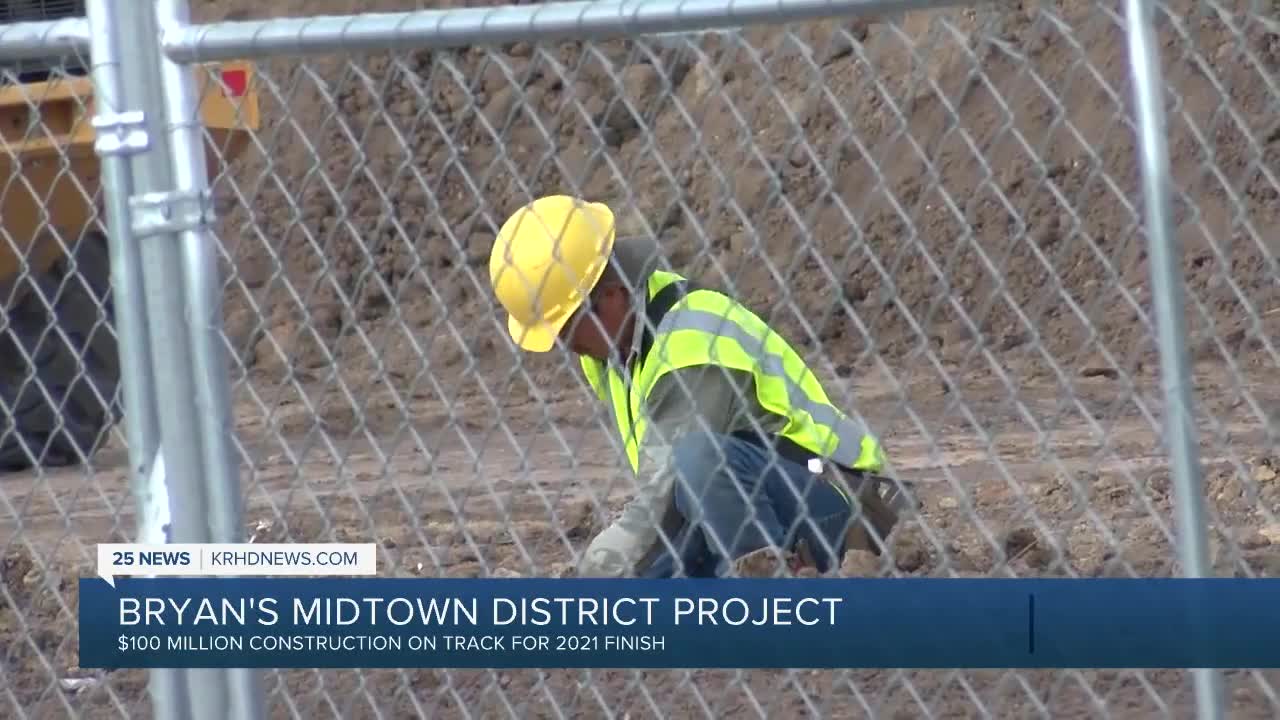 BRYAN, TEXAS — Construction at Bryan's Midtown Park is coming along and city officials say the work is right on pace despite breaking ground when the pandemic first hit.

Much of the work you cannot see from the road, but one thing you may have noticed while traveling in the area and down Villa Maria Road is the new traffic light flashing yellow.

Officials say the light is in its testing phase and by the time it is activated, hopefully travelers will be accustomed to a new traffic signal being there.

Crews continue to dig into the 100-million dollar project in Bryan's Midtown District, converting 100 acres of what used to be an old gold course into a new regional attraction for every one to enjoy.

"Not just folks who live here, but visitors to the community whether we are hosting sporting events or events at the indoor event center, it's an opportunity for folks to take advantage if what we will have to offer at Bryan Midtown," Paul Kaspar, Engineer for the City of Bryan said.

The new Bryan Midtown Park will be a world-class destination featuring athletics fields and plenty of indoor and outdoor recreation opportunities.

"There will be basketball courts...volleyball...there will be green space, an open space, 2 miles of walking trails. We will have a cleaned out lake and deepened lake, a lake where folks can folks can recreate on the surface of... paddleboard and kayak," Kaspar added.

Kaspar says years ago an upstream chemical company once polluted the lake, where arsenic was detected. Now, the City is spending millions renovating, testing and excavating the lake to make it safe.

"We set that out as an early goal to make sure everyone was comfortable when the park is redeveloped and folks can be out here with their families recreating, there's not any kind of perception issue left with the lake," Kaspar added.

During the construction, they are keeping safety a top priority. One way is thoroughly washing work vehicles that exit the site to prevent any sediment from being carried throughout the city.

Bryan Beinke can be found skating at Williamson Park just adjacent to the construction site. He's a Bryan man already familiar with the project and hopes skating can eventually be included.

"Maybe... maybe... they would be willing to expand the skatepark just a little bit...fingers crossed...grasping for straws, but that would really excite me," Beinke said.

Beinke believes most tourists who come to town are attracted to College Station, but with this new venue, he thinks the local economy in Bryan would see an immediate impact.

"If they had it here... it would bring more economic opportunities which means more jobs which also means more money," Beinke added.

Kaspar says the entire project won't be completely finished for a few years, but he says hopefully the new ballfields at Travis Fields will be ready to go in time for the Little League season in the spring of 2021.