Bremond I.S.D returns back to school after COVID outbreak 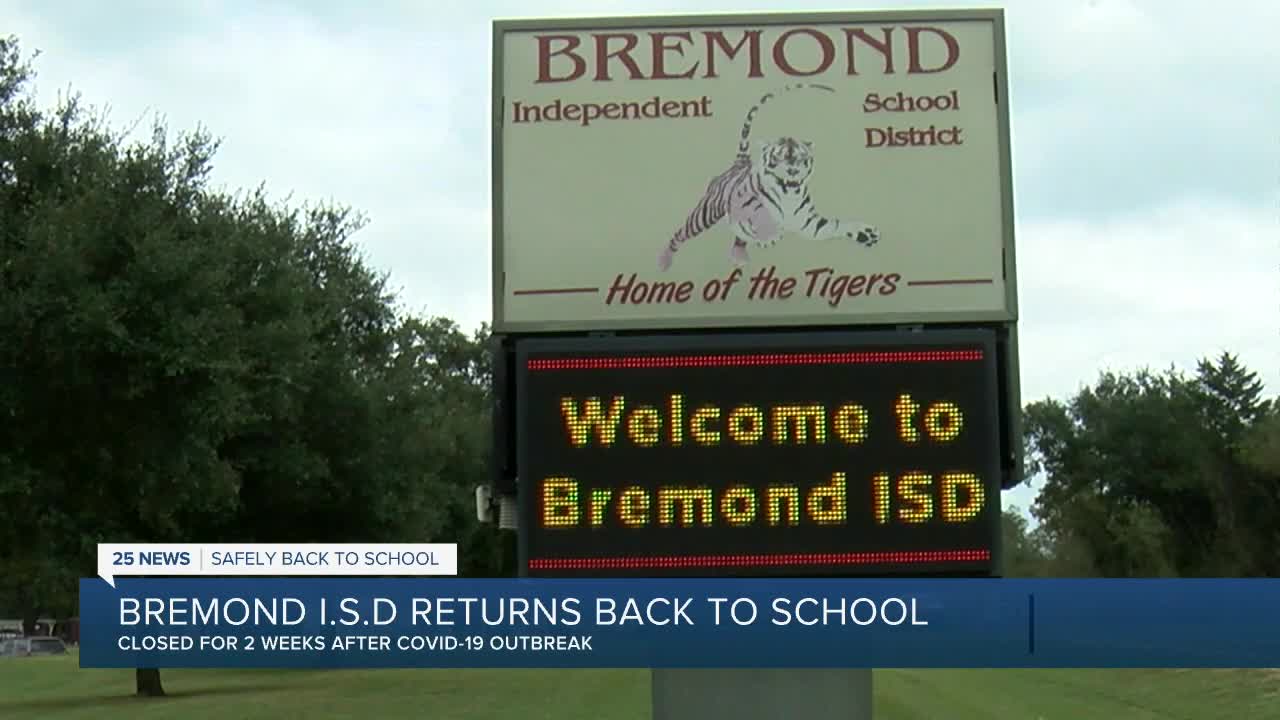 BREMOND, TX — Bremond I.S.D canceled in person classes for two weeks due to an outbreak of eleven positive COVID cases—today they returned to campus.

Bremond I.S.D, home of the fighting tigers, have definitely shown how much fight they have in their bite. After encountering a COVID outbreak and canceling classes, the school district has returned to school with ease.

Daryl Stuard, the Bremond ISD Superintendent, experienced his own struggles with the virus bringing him to some uncertain times. Now, feeling much better, he says there is one thing he is certain about.

”We’ve learned over the course of the time since March when this all came out that remote learning is just not effective,” Superintendent Stuard said.

“My teachers mental health is worth way more than what we were investing to get out of it,” said Stuard

The work load of online learning for teachers seems to be too much to handle. Students like Hannah Harris may actually agree where she enjoyed online lectures until she realized how hard it was for her.

”I did at first but it’s a little more difficult than in class and face to face,” said, Hannah Harris junior at Bremond High.

Now that classes are back in session, Harris is sad she's not in the comfort of her home but she knows this is best.

School officials sat down together to discuss how and when they will return.

”A lot goes into the decision of when we come back you know we have three principles our school nurse and I always sit down and we try to make that decision together,” said Stuard.

Taking all the right measures to ensure their students safety before, after, and during the outbreak, according to contact tracing, the school district discovered the spread of the virus did not occur on campus.

”We’ve had very little spread of the virus here at the school, so we feel like we're going to continue to do what we’ve done, we’ve put in a few other things in place with our younger kids," said Stuard.

These new rules among the elementary school are in hopes of preventing an entire school shutdown once again. Changes to extracurricular schedules have also been made in hopes of finishing the seasons strong.

”We’re just going to follow that state departments guidelines and what they say we should and shouldn’t do, like I said a lot goes into that but hopefully we’ll be able to continue on with our program we’ve had to do a lot of schedule changes,” said Stuard.

The school is playing football games every 5 days to get those games finished. Meanwhile students and the school's administration are happy to be back.

The school district initially set its return date on October 23 but had a change of plans while taking recommendations from the state health department. They made the announcement via Facebook last week that they have decided to return to in-class instruction on Thursday, October 22.