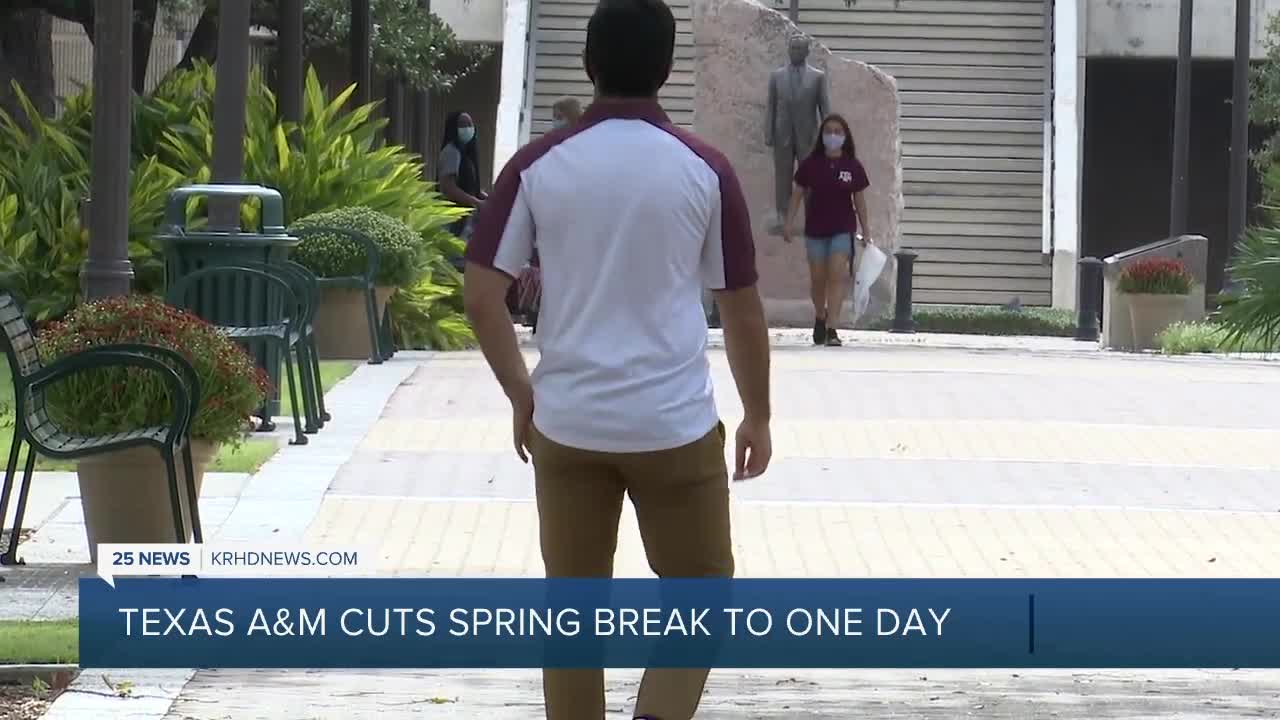 “I feel like if you just add individual days it’s not going to make that much of a difference. The part that makes spring break so important is when it’s five consecutive days and you don’t have that stress for an entire week or you have an entire week to just relax it makes it nicer because you get your mind off things,” says Freshman Caleb Mullins.

The decision comes as university officials try to minimize extensive travel which some students say they understand.

“I understand where the university is coming from, they are trying to limit travel but I think that have an extra day might be nice, I mean I don't think it's really going to make a difference because of online classes and people just being able to go and do whatever they want from where ever they’re at,” says freshman Abigail Garza.

The one-day spring break also allows for the spring semester to conclude earlier, but some students say they don’t care for shorter semesters, in fact, they find them more challenging.

“A lot of people usually like to have more time with classes so they can just spread out the material rather than just rushing to do so much stuff in like one less month,” says Amin Kazori.

With spring break shortened, A&M has added a holiday on March 2 for Texas Independence Day.

Senior Amin Kazori wishes school leaders would have added that to the so-called "abbreviated" spring break, to take some of the sting out of losing the whole week.

“The thing is you need to have like two or three days off. If you just have like one day off I know what professors are going to do they’re going to give us so much homework to do that one day but if you give us like five days off or even like three days off we will have more time to sleep with not have any homework to do, which is what I usually like more as a student,” says Kazori.

With their favorite vacation time, practically cut to just a three day weekend, students say they hadn't planned what they’d do March 19th, but they say, it probably won't amount too much.

“Probably going to be just another guys playing online night because I don’t think we can do much in one night really so we are probably going to treat it as an extended weekend,” says Kazori.

“I mean I might go home, I might go do something with my family, not really sure honestly it's so far away,” says Garza.

Some just hope by November 7th, when spring registration starts, they can find some way to make their "one-day break" worthwhile.

“I am probably going to have to reschedule my classes so that I have a ton on Friday. for me like I don’t have any [classes] this semester that are Friday so it’s kind of like am I even going to get a spring break at all?” says Mullins.