As most states raise their minimum wages, Texas refuses to budge

"As most states raise their minimum wages, Texas refuses to budge" was first published by The Texas Tribune, a nonprofit, nonpartisan media organization that informs Texans — and engages with them — about public policy, politics, government and statewide issues.

Frances Sanchez lost custody of her three kids to her ex-husband in September 2017 after she became homeless. The 35-year-old Marine Corps veteran was working and going to school but could no longer afford to pay rent on her apartment in the Dallas suburb of Garland.

This fall, she earned her bachelor’s degree in criminal justice from Remington College and now works two jobs: As an administrative assistant at a tax office, where she earns $9 per hour, and at an Amazon shipping facility, a seasonal job that pays $15 per hour. Meanwhile, she’s living with a friend and trying to save for her own place.

“I’m aiming to still get a house for my kids like I promised them,” Sanchez said. “One of these days I will. I wish I had kept my promise … but you know, life happens.”

To make a living wage in Texas, a single adult would have to earn $11.03 an hour, according to the Massachusetts Institute of Technology Living Wage Calculator. That’s the minimum required to cover food, housing, transportation and other basic necessities. But for someone like Sanchez with three kids in Dallas County, the living wage is $33.45 per hour — almost $10 more than what she makes.

“I’m aiming to still get a house for my kids like I promised them,” Sanchez, 35, said. “One of these days I will. I wish I had kept my promise … but you know, life happens.”

As of July, about 30 states have minimum wages higher than the federal minimum wage of $7.25 per hour. Texas is not one of them.

Even as other traditionally red states like Arkansas and Missouri have recently raised their minimum wage — 18 states approved an increase this year alone — Texas has kept its minimum wage tied to the federal rate, which hasn’t increased since 2009.

As the state Legislature prepares to return to session in January, Democrats will once again push to increase the state minimum wage, even as the number of minimum wage workers in Texas continues to decline: In 2017 only about 3 percent, or about 196,000 of the state’s workers, earned at or below the federal minimum wage, according to the U.S. Bureau of Labor Statistics.

State Rep. Lina Ortega, D-El Paso, has already filed legislation for the 2019 legislative session that would let counties and cities set a local minimum wage that’s higher than the state minimum wage — which isn’t currently permitted under state law. Ortega, who has served on the House’s Economic and Small Business Development Committee, proposed similar legislation last session, but the bill never made it out of committee.

And even though Republicans will still dominate the legislature next year, she’s hopeful “things are going to be a little different” after Democrats increased their numbers in both the House and Senate in last month’s elections.

Jonathan Lewis, economic opportunity policy analyst for the left-leaning Center for Public Policy Priorities, said Texas Republicans tend to have faith that the job market will adjust as needed. The belief is employers will raise wages when they feel they have to compete for employees.

“I think what we really need to talk about is, what is a living wage?” Lewis said. “And how many people are being paid at an actual living wage so they can afford to get by, afford housing, food, clothing and all the things people need to live?”

During last year’s legislative session, state Rep. Hugh Shine, R-Temple, said raising the minimum wage would lead to wage inflation and adversely affect the economy. Relative to the cost of goods and services in Texas, Shine said he believes Texas is already “on target with its minimum wage,” and that an increase is unnecessary.

“[The minimum wage] should be boiled down to what the value of the dollar is in states,” Shine said. “The value of a dollar based on personal income, cost of living, the median home value — all those are economic factors that need to be considered on a state-by-state basis.”

“Working people of Texas still have not received any substantial pay increase, but the cost of living and the cost of goods and services keep going up,” Thompson said.

This year, the Tribune has joined news outlets in New York, Washington state and Georgia to examine how state and local policy contribute to the issue of income inequality. Texas’ living wage for a single adult is lower than all three of those states: in New York, it’s $14.42 per hour, while the living wage in Washington and Georgia are $12.28 and $11.93 an hour, respectively.

“We want to be able to demonstrate [minimum wages] like this support families and don’t harm businesses,” said Dallas City Council member Philip Kingston, who helped craft the 2015 ordinance. “I think there’s broad agreement that people who work full time should be able to pay for the necessities of life.”

Mercedes Fulbright, the Texas state coordinator for Local Progress, a national network of progressive local elected officials, said city officials are working to convince the state that they are capable of deciding what is best for their communities when it comes to raising the minimum wage.

Meanwhile, more Texas workers are opting for another method of increasing their wages: joining labor unions.

Texas is one of 28 right-to-work states, meaning workers aren’t obligated to join a union. And its union rate in 2017 was less than half the national average of 10.7 percent, according to the BLS. But union membership is inching up: from 2016 to 2017, it grew from 4 percent to 4.7 percent. That was the biggest growth in Texas union membership since 1983.

“You see major organizing victories in many different industries around the state of Texas,” said Rick Levy, president of Texas AFL-CIO, a state labor group made up of union members.

“It’s the only way people who work in these low-wage industries can make a real change,” said Willy Gonzalez, Texas chapter president of Unite Here. “When [workers] come together the companies have to bargain together with the workers as one and that’s the only way they can really have enough power to change the workplace.”

According to labor statistics, in 2017 union workers earned about 20 percent more than nonunion workers nationally.

AFL-CIO spokesman Ed Sills said because many of the laws governing unionization are federal, the state Legislature "can only nibble around the edges in terms of the fundamental way that collective bargaining occurs.”

Last year, the Texas Senate passed Senate Bill 7, which would have prohibited public employees from paying union dues through payroll deduction, but the bill was never voted on by the House.

When Lee Daugherty opened up the Dallas bar Alexandre’s14 years ago, he said he was “pretty much the run-of-the-mill ultra-capitalist.”

Daugherty said he soon realized he needed to pay his workers better to combat the high turnover rate common in the service industry.

“That is extremely costly,” Daugherty said. “Anything I can do to better retain and take care of workers and maintain a better quality of life, that’s something [I] should do,” Daugherty said.

Daugherty said he also became uncomfortable with the fact that his servers, like other service industry workers who receive tips, got a minimum wage that started at $2.13 an hour.

“It’s a slave wage, ” Daugherty said. “While the business models rely on customers to subsidize the labor costs, to me I just ruled that as kind of not fair, and if I could do anything to help their overall wage, I was going to do that.” 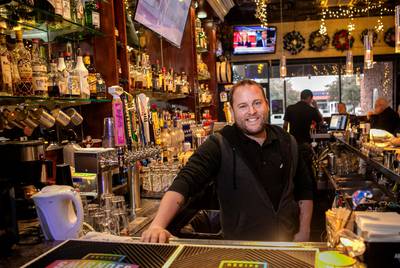 Lee Daugherty, owner of Alexandre's Bar in Dallas, pays his bartenders $8 an hour with a $15 per hour guarantee. The legal minimum wage for service workers who receive tips is $2.13 per hour. Leslie Boorhem-Stephenson

Today, Alexandre’s bartenders earn $8 an hour, with a $15 per hour guarantee — if they don’t receive enough tips to reach $15 an hour, Daugherty makes up the difference.

In Austin, Adam Orman, general manager of Italian restaurant L'Oca d'Oro, has also instituted an $8 per hour base pay for employees who interact with customers and $11 to $13 per hour for back-of-the-house employees such as kitchen staff. Employees also earn a share of the restaurant’s 20 percent service charge, which is divided among the non-management workers.

“Initially we did it to raise the [wage] floor for the servers,” Orman said. “It makes them a little bit more professional because they know that no matter what happens, they have a higher [wage] floor for what they are going to earn. It also means ideally they’re more invested in the restaurant because they’re not just tipped employees.”

Annie Spilman, Texas state director for the National Federation of Independent Business — which represents more than 20,000 small businesses in Texas and more than 300,000 nationally — said many of their members pay above the minimum wage, but others argue that increasing the federal minimum wage will spur employers to hire fewer employees.

“For a small business owner, they want to employ people, but [if] the government says you have to pay $15 or more, you only have so many options,” Spilman said.

In Dallas, Sanchez hasn’t found many options for full-time work that will let her use her criminal justice degree — or more importantly, help her prove to a judge that she’s stable enough to gain custody of her children.

Disclosure: The Center for Public Policy Priorities has been a financial supporter of The Texas Tribune, a nonprofit, nonpartisan news organization that is funded in part by donations from members, foundations and corporate sponsors. Financial supporters play no role in the Tribune's journalism. Find a complete list of them here.

This story is part of the "State of Inequality" series, which was funded by the Ravitch Fiscal Reporting Program at the Craig Newmark Graduate School of Journalism. Read other stories from the series here, including pieces from Georgia, Washington and New York. 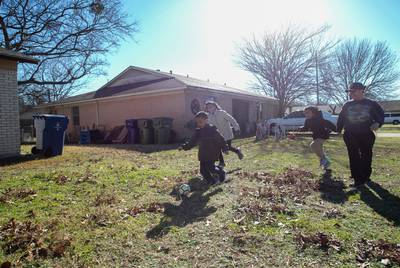 Frances Sanchez plays soccer with her three children, Pedro (left), Katrina and Samaria in the front yard of a friend's house where they are staying. Leslie Boorhem-Stephenson 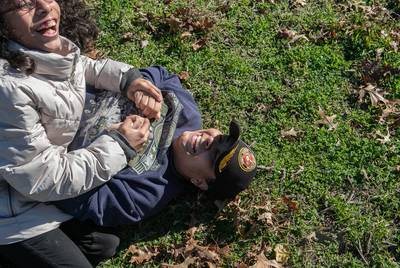 Katrina Sanchez, 12, tackled her mom Frances Sanchez while playing an improvised game of soccer in the front yard where they are staying in Garland. Leslie Boorhem-Stephenson

Leslie Boorhem-Stephenson for The Texas Tribune

This article originally appeared in The Texas Tribune at https://www.texastribune.org/2018/12/20/most-states-raise-their-minimum-wages-texas-refuses-budge/.