"Texas education board moves to reinsert Hillary Clinton, Helen Keller into curriculum" was first published by The Texas Tribune, a nonprofit, nonpartisan media organization that informs Texans — and engages with them — about public policy, politics, government and statewide issues.

Editor's note: This story has been updated to note that the State Board of Education voted to reinsert Hillary Clinton into the state's 11th-grade U.S. History standards.

The Texas State Board of Education backed a motion Tuesday evening to reinsert Hillary Clinton into the state's 11th-grade U.S. History standards, two months after voting to remove the 2016 Democratic presidential nominee from the state's curriculum. In a separate action Tuesday, the board backed restoring disability rights advocate Helen Keller to the state's third-grade social studies curriculum standards.

Clinton's deletion from the high school U.S. history curriculum appeared likely to stand Tuesday, as she was not mentioned during the public hearing of the board's Tuesday meeting. But after a lengthy discussion, the board voted 12-2 to back a motion to reinsert Clinton into the curriculum. A final vote on the issue will come Friday.

In response to a motion by Board Member Erika Beltran, D-Fort Worth, to reinsert Clinton into the standards, fellow Board member Marty Rowley, R-Amarillo, referenced “tons of public comment” that he’d received before Tuesday's meeting. “I don’t agree, obviously, with her politics,” said Rowley. “I just think she qualifies as significant.“

The state board is meeting this week to finalize the changes to social studies curriculum, part of a streamlining effort that began 10 months ago in response to teacher feedback that the standards included too much material to cover in a school year. Work groups made up of teachers, historians and curriculum experts were tasked with cutting repetitive and unnecessary requirements out of the social studies standards. The board was set to take preliminary votes on the changes Tuesday after an afternoon discussion.

After hours of public testimony Tuesday, the board approved amendments restoring references to Keller and the importance of Women Airforce Service Pilots, or WASPs, in World War II.

Gabrielle Caldwell, a 17-year-old deaf-blind student, testified before the board with her mother, Robbie, urging board members to reconsider striking Helen Keller’s name from the standards.

“Without broad academic knowledge of Helen Keller, deaf-blind students like my daughter cease to exist,” said Robbie Caldwell, a member of the Deaf-Blind Multihandicapped Association of Texas, a disability rights advocacy group for parents of disabled children. 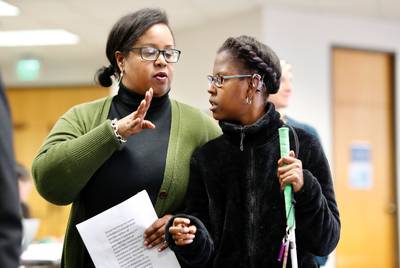 Gabrielle Caldwell, 17 (right), who testified before the State Board of Education on keeping Helen Keller in mandatory curriculum, is shown with her mother, Robbie, on Nov. 13, 2018. Bob Daemmrich for The Texas Tribune

After the Caldwells’ testimony, board chair Donna Bahorich was visibly emotional as she thanked them for their presence at the board meeting.

Even ahead of the vote to restore Helen Keller to the curriculum, board members were expressing a willingness to reconsider her removal.

“I’ve lost a lot of sleep about that,” Pat Hardy, a Fort Worth Republican who represents SBOE District 11, told the Tribune earlier Tuesday. “Helen’s back in.”

Jane O’Brien, who described herself as the parent of a child with a learning difference, called Helen Keller “an important reminder for teachers to not underestimate their students.” Texas has a problematic history with regard to disability rights, said O’Brien, referencing the state’s current legal battle with the U.S. Department of Education for decreasing special education funding.

“People forget about it,” said Paul Daley, whose daughter is deaf-blind and nonverbal and is also a member of the Deaf-Blind Multihandicapped Association of Texas, described the disability community as “the only one that you can join, any day.” He urged the board to put Helen Keller back into the curriculum standards.

“Her story makes my own life a little bit easier,” he said.

Several members of the public also testified on the proposed deletion of the Women Airforce Service Pilots in World War II, or WASPs, receiving a warm reception from the board. An amendment to restore the WASPs to third-grade standards passed unanimously.

Defenders of the cuts to the policy have stressed that removing important historical figures from the state’s requirements did not prevent individual schools from teaching them.

“It should be noted that curriculum standards are merely a floor for instruction, not a ceiling,” Bahorich wrote in a op/ed in September that originally ran in The Washington Post. “Allowing time for teacher flexibility encourages the inclusion of topics and figures relevant to students.”

The board also heard testimony Tuesday on how the state's high school curriculum currently handles the Israel-Palestine conflict, which includes asking students to “explain how Arab rejection of the State of Israel has led to ongoing conflict.” After critics argued that the language inaccurately placed the onus of the conflict exclusively on Palestinians, the board approved an alternative from Member Tom Maynard, R-Florence: “Discuss factors contributing to the Arab-Israeli conflict, including the rejection of the existence of the state of Israel by the Arab League and a majority of Arab nations.” But it wasn’t good enough for Georgina Pérez, D-El Paso, who exclaimed, “Oh God, no, this is horrible,” as the motion passed.

At around 7:30 p.m. Tuesday, the board voted to reschedule the remainder of the discussion for Wednesday morning following the state education commissioner’s remarks.

This article originally appeared in The Texas Tribune at https://www.texastribune.org/2018/11/13/hillary-clinton-helen-keller-state-board-education-texas/.