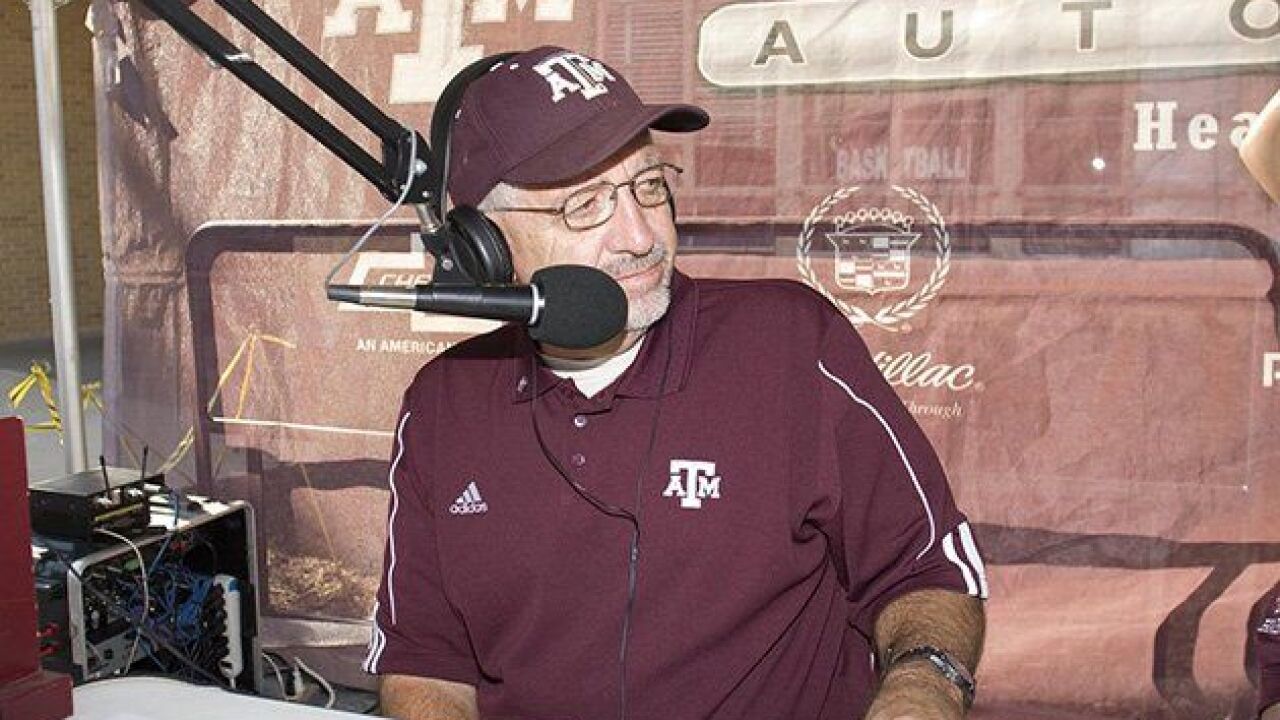 The National Football Foundation (NFF) & College Hall of Fame announced today that Texas A&M University broadcaster Dave South, who called his last Aggies football season in 2017, will be the recipient of the 2018 NFF Chris Schenkel Award. He will officially be honored Dec. 4 during the 61st NFF Annual Awards Dinner at the New York Hilton Midtown.

Presented annually since 1996, the award recognizes individuals who have had long, distinguished careers broadcasting college football with direct ties to a specific university. The award is named in honor of its inaugural recipient Chris Schenkel, the longtime ABC Sports broadcaster who emceed the NFF Annual Awards Dinner for 28 consecutive years from 1968 to 1995.

“Dave South spent more than three decades as the iconic Voice of the Aggies, becoming part of Texas A&M football lore while broadcasting to one of the most avid fanbases in the country,” said NFF President & CEO Steve Hatchell. “We are pleased to honor him with the 2018 NFF Chris Schenkel Award in recognition of his distinguished career.”

South wrapped up his 33rd and final season as the “Voice of the Aggies” in 2017, having started his time in the Texas A&M booth in 1985. Overall, the broadcasting legend spent 47 years as a collegiate announcer. Although he is stepping away from football and basketball broadcasts, South will continue to call Aggie baseball on a year-by-year basis.

A native of Wichita Falls, Texas, South created his first scorebook as a youth after studying his Little League coach's, and he prepared for his future career by re-calling his favorite Brooklyn Dodgers games from a perch mimicking a press box.

South's path led him eventually to Waco, Texas, and KWTX Radio, where he was mentored by and called games with legendary broadcaster Frank Fallon, who later became the Voice of the Baylor Bears and claimed the NFF Schenkel Award in 2001.

South was hired in 1970 by the Humble/Exxon Southwest Conference Radio Network, which broadcast SWC football games, and he is the last of the network’s broadcasters still on the air.

South hosted a two-hour morning news and talk show from 1974-81 before departing full-time radio for the first—and only—time in his career in 1981. For the next two years, he worked as a salesman for Herndon Medical Supplies during the week while remaining active as a sports broadcaster on the weekend. South returned to radio to work in sales in 1983, working at KNFO in the Waco area.

South almost completely retired from broadcasting in 1984, but Texas A&M head coach and athletics director Jackie Sherrill asked him to fill in for one season at Kyle Field in 1985, which led to his more than three decades calling Aggie football, basketball and baseball games.

South has been on the call for some of Texas A&M’s most memorable games, including the 1986 Cotton Bowl when A&M beat Auburn and College Football Hall of Famer Bo Jackson; Hall of Fame coach R.C. Slocum’s win over No. 1 Oklahoma in 2002; and theJohnny Manziel-led victory at No. 1 Alabama in 2012.

His call of running back Sirr Parker’s winning touchdown in the 1998 Big 12 championship game against Kansas State was selected as one of the top 100 calls of the 20th century and was featured in a book and CD.

With South on the call, the Aggies have claimed seven conference titles, 16 Top 25 finishes and nine wins in 26 bowl appearances. His time on the mic in Aggieland has included the careers of College Football Hall of Famers Dat Nguyen and Coach R.C. Slocum and NFF National Scholar-Athletes Kip Corrington (1987), Lance Pavlas(1990) and Ryan Tannehill (2011).

South does not shy away from anyone referring to him as a homer. “I am a homer,” he told the Houston Chronicle. “I work for Texas A&M. I want the Aggies to win.”

South also served as A&M's associate athletics director for sponsorships and broadcasting through 2009, prior to focusing on his broadcasting duties in semi-retirement.

A graduate of Midwestern State (Texas), South is married to his wife, Leanne, and they have two sons, Randy and Mike.

South will be honored during the 61st NFF Annual Awards Dinner in New York alongside the recipients of the other NFF Major Awards, including retiring Yale athletics director Thomas Beckett and Harvard athletics director Bob Scalise (NFF John L. Toner Award co-recipients for excellence in athletics administration) and the yet-to-be announced recipient of the NFF Gold Medal.

In addition to the presentation of the NFF Major Awards, the 61st NFF Annual Awards Dinner will provide the stage for the induction of the 2018 College Football Hall of Fame Class; the presentation of the 2018 NFF National Scholar-Athlete Awards, presented by Fidelity Investments; and the bestowing of the 29th NFF William V. Campbell Trophy®, presented by Fidelity Investments, to the nation’s top football scholar-athlete.