As cities sprawl, more Texans are exposed to tornadoes

April 3, 2012 was a hot and humid day in North Texas, and the unstable atmosphere spawned 17 tornadoes in five hours in the Dallas-Fort Worth area, one of the most destructive tornado outbreaks ever in Texas. The storms flattened neighborhoods, ruined elementary schools and took out approximately 110 airplanes at Dallas/Fort Worth International Airport, part of more than $700 million in damage.

Fox has worked as a meteorologist in North Texas and the Panhandle — the bottom of the country’s infamous Tornado Alley — for nearly 20 years. As the warning coordination meteorologist at the National Weather Service’s Dallas-Fort Worth office, he’s tasked with deciding when a storm is dangerous enough to warrant an emergency alert. More than 8.8 million people live in the 46 counties that Fox oversees — and 2.2 million of them have moved there since 2000. That means more people live in harm’s way.

Texas has grown faster than any other large state this decade. It’s been the nation’s growth center and has shown no signs of slowing down, according to Steve Murdock, former director of the U.S. Bureau of the Census.

For Fox, this means the tornadoes that he’s spent his whole career tracking can destroy more lives than ever before.

Some suburbs around Dallas and Fort Worth have doubled in size over the past 20 years. Others have tripled. To accommodate additional residents, new housing developments and businesses have sprung up in multiple cities.

As a result, the recipe for disaster that Fox said he fears has already begun: Tornadoes striking densely populated communities that simply didn’t exist a few years before.

The environment was ripe for severe weather on April 3, 2012: Warm, moist air from the Gulf of Mexico rose north and collided with cold, dry air that rolled down from the Rocky Mountains.

The first of four major tornadoes — an EF-2 or greater with reported winds of more than 110 mph — touched down just south of Lancaster at noon. Within minutes, the tornado’s path ripped through several subdivisions within the city, injured 10 people and damaged or destroyed 173 homes — many of which were in neighborhoods that didn’t exist a decade before. 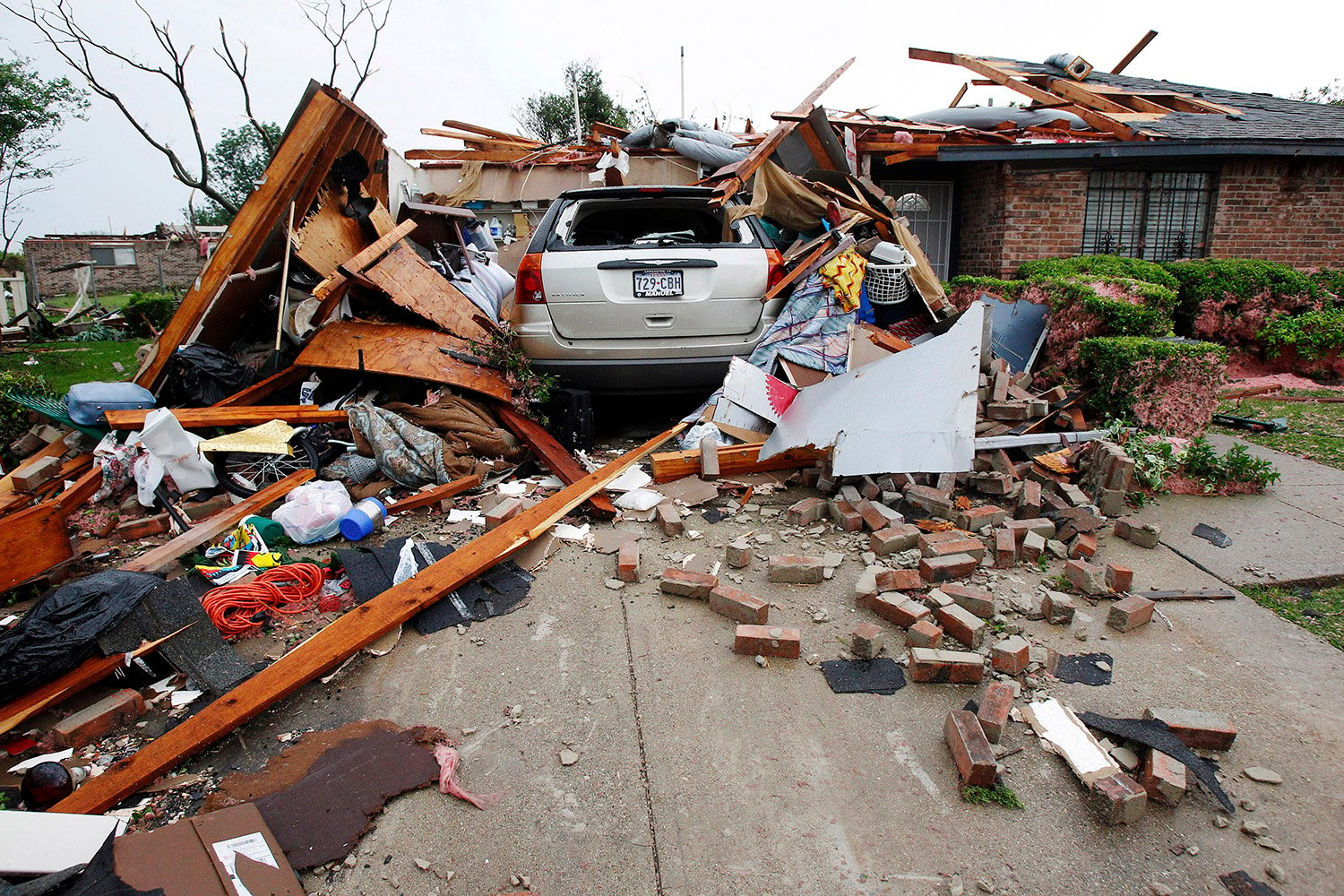 A vehicle rests in the driveway of a home destroyed by a series of tornadoes ripping through the Dallas suburb of Lancaster on April 3, 2012. Up to a dozen tornadoes skipped through the densely populated Dallas-Fort Worth area, ripping apart homes and tossing tractor-trailer trucks into the air, but there were no reports of serious injuries or deaths. REUTERS/Tim Sharp

The strongest tornado of the day struck Forney, a suburb 20 miles east of downtown Dallas. Forney has grown by more than 230 percent since 2000, adding 13,000 residents. At 2:33 p.m., an EF-3 tornado with peak winds of 170 mph tore through more neighborhoods, including the Diamond Creek subdivision that didn’t exist a decade before.

What made this day particularly rare, Fox said, was that there were tornadoes on both sides of the Dallas-Fort Worth metro area within such a short space of time. That hardly ever happens.

Fortunately, no one died that day, something that Peter Morgan, Forney’s director of community development, still can't quite believe.

This means that the peak winds reported from the 2012 tornado could still destroy the majority of the structures in its path if it were to strike again today.

In response to the various natural disasters that threaten the state — including tornadoes — Texas' Legislature has taken steps to help its communities to recover quicker. In 2017, a bill was passed to make it easier for prescription drugs and other medical supplies to be transported to disaster areas. And in 2015, out-of-state businesses and employees working on disaster recovery became exempt from taxes and certain licensing requirements.

Across the state, there have been more than 650 reports of tornadoes since 2013, ranging from Lubbock to Corpus Christi, from El Paso to Houston. Seventy of those have been EF-2 and above.

Aside from luck, Fox said that earlier weather forecasts from improved radar technology allowed his office and other emergency agencies to start preparing for a potential disaster up to seven days in advance. Mobile radar apps, emergency alerts, NOAA Weather Radio, warning sirens and social media were all used to communicate the warnings to residents.

After seeing the destruction across his city for himself on April 3, 2012 Dallas Mayor Mike Rawlings described the events as a miracle. Texans may have to hope for more miracles in the future.

Disclosure: Steve Murdock has been a financial supporter of The Texas Tribune, a nonprofit, nonpartisan news organization that is funded in part by donations from members, foundations and corporate sponsors. Financial supporters play no role in the Tribune's journalism. Find a complete list of them here.

This article originally appeared in The Texas Tribune at https://www.texastribune.org/2018/05/17/cities-sprawl-more-texans-are-exposed-tornadoes/.