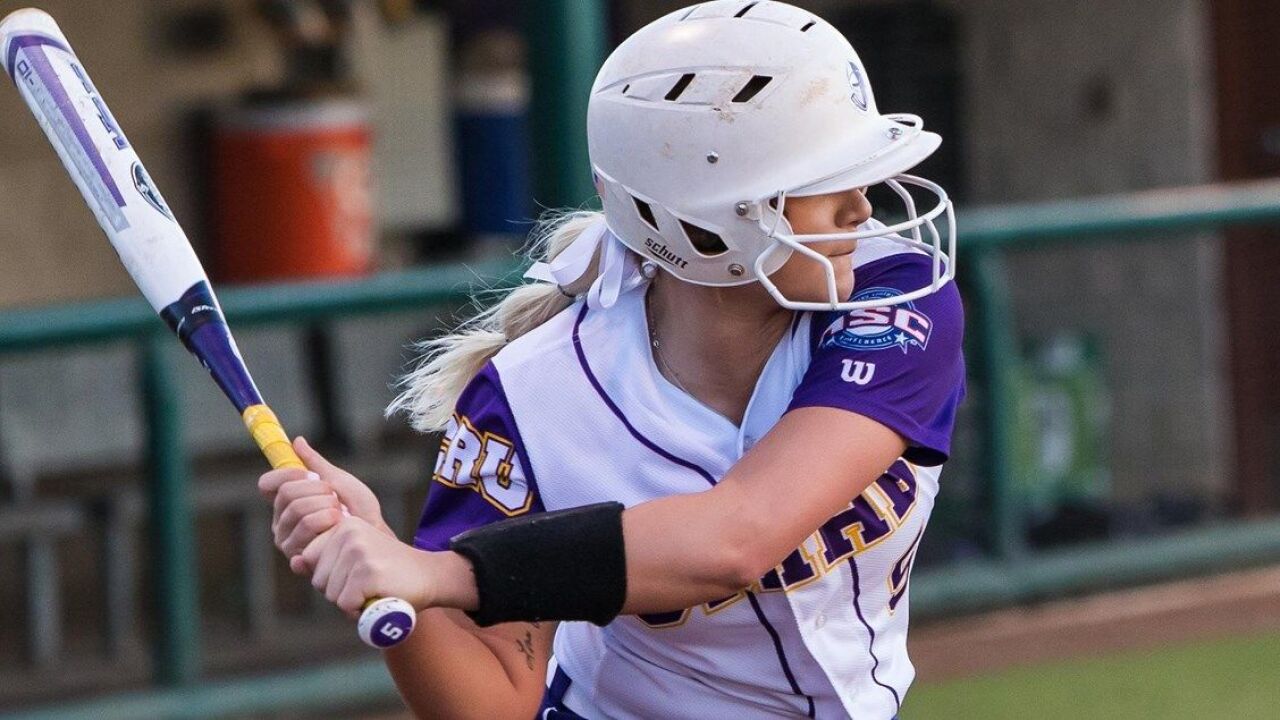 The University of Mary Hardin-Baylor softball team earned two wins over Hardin-Simmons University Tuesday afternoon in Abilene, beating the Cowgirls 6-0 and 9-2. The wins improved the Cru to 15-7 on the season and 10-4 in American Southwest Conference action while the Cowgirls fell to 0-22 on the year and 0-14 in league play.

UMHB opened the game with a 1-0 lead in the top of the first when Linsey Tomlinson scored from third base on an error by HSU. The Cru would not score again until the third inning stretching the lead to 3-0, when Tomlinson solo-homered to center field. Later in the inning, Kourtney Cummings scored on an RBI single to left center field by Kasi Cummings. Held scoreless in the top of the fourth, the Cru added one more run in the top of the fifth inning on another solo home run by Tomlinson, bringing the score to 4-0. UMHB added two more runs in the top of the sixth inning to stretch the lead to 6-0. Kasi Cummings scored on an RBI to left field by Makenzi Dawson and Dusti Douglas scored on the next at-bat from an RBI fielder's choice by Linsey Tomlinson. The Cru went scoreless the rest of the game to bring home a final score of 6-0. Tomlinson and Emily Bounds led the Cru with three hits each, while Tomlinson had a team-high three RBI and three runs. Hannah Halepaska earned the win for the Cru, pitching a complete game allowing only three hits, with none allowed after the third inning while striking out seven. Hardin-Simmons threw two pitchers, with Lexie Allen taking the loss for the Cowgirls. UMHB totaled six runs on 11 hits with no errors, while HSU score no runs on three hits with one error.

Hannah Wolfe opened the second contest with an RBI single scoring Devon Walter to give UMHB a 1-0 lead after the top of the first. Hardin-Simmons scored two in the bottom of that inning to take its first lead of the series. UMHB responded with five consecutive scoring innings to take a 9-2 win over the Cowgirls. Kasi Cummings scored in the second inning off an RBI double by Kourtney Cummings before Walter slammed a two-RBI homerun to center field, scoring Tomlinson in the third. Dawson and Jessica Picou were the scoring base runners in the fourth, reaching off another RBI single from Wolfe. Avery Kelly hit in the scoring run in the fifth inning with a sacrifice fly to score Kasi Cummings. Walter and Bounds recorded back-to-back RBI hits in the sixth to finalize UMHB's win. Walter, Wolfe, Kourtney Cummings and Kelly led the Cru with two hits each while Walter and Wolfe hit in a team-high three RBI. Walter was also the leader with three runs as Tomlinson and Kasi Cummings each scored two. CeCe Darilek threw the complete-game win for the Cru with six hits and two runs allowed in seven innings of work. Darilek struck out five and walked just one batter. Gabby Ortega and Genia Salazar combined for the Cowgirls, allowing 10 hits with nine runs.  UMHB totaled nine runs on 10 hits with one error while the Cowgirls had two runs on six hits with one error.

UMHB returns to action on Wednesday, March 21st in a 12 p.m. single game against the Cowgirls in Abilene.