Red Zone Game of the Week: Rockdale vs. Troy 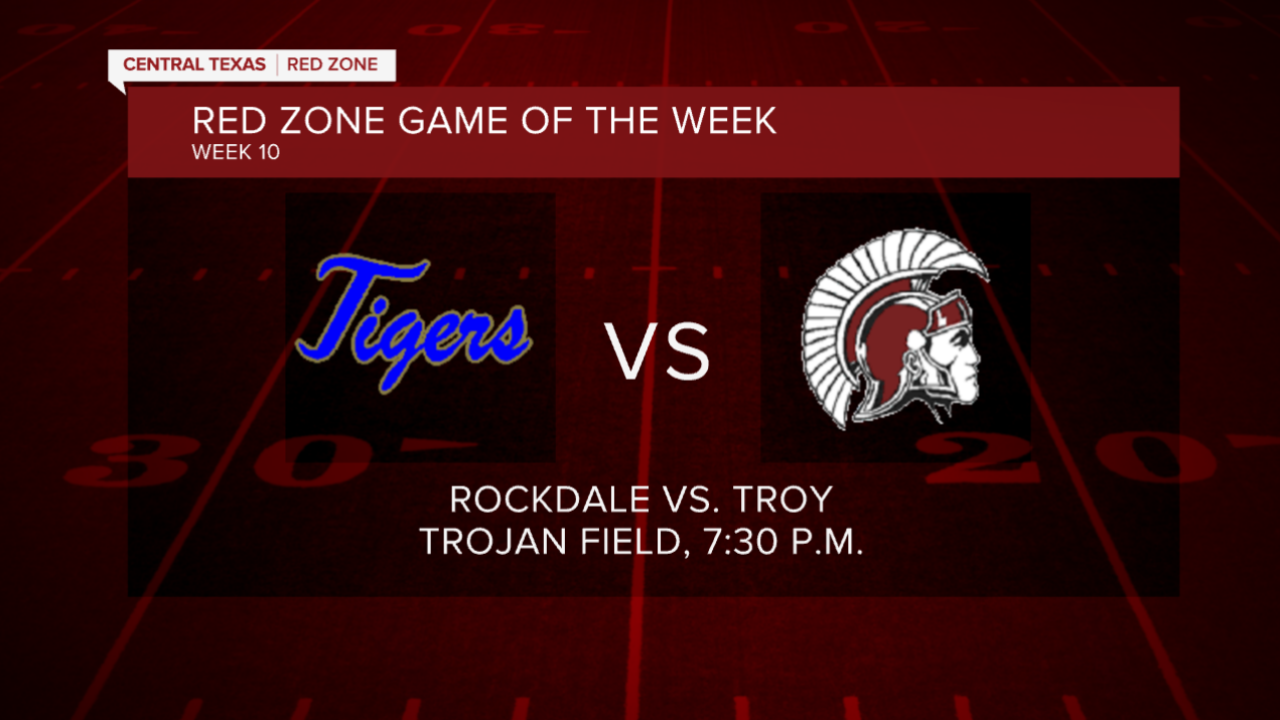 TROY, Texas — Two of the top rushing attacks in Central Texas will battle for control of District 11-3A I when Rockdale travels to Troy to take on the Trojans in the Red Zone Game of the Week.

Rockdale enters Week 10 riding a three game win streak. They have scored 40 or more points in each of their last four games, including a 42-9 drumming of rival Cameron Yoe on October 2.

“We want to prove ourselves, and I ask them to prove themselves every drive,” senior running back Cam'Ron Valdez said.

The Tigers have dealt with plenty of adversity during the 2020 season. Week One, Jace Robinson, their senior starting quarterback, broke his leg. Robinson was a crucial part of the Tigers success and was considered by some to be a dark horse candidate for District MVP.

“Whenever we lost our quarterback, it made us realize what we really could lose," senior center Alex Ellison said. "So it gave us a feeling that we need to work harder and then come back.”

Following Robinson's injury, the Tigers struggled to find an identity. After two straight wins to open the year, Rockdale lost three in a row to Bellville, Lexington and McGregor.

The upset loss at McGregor was a shock to fans across the state. Head Coach Jacob Campsey said it served as a wake-up call for his team.

“That Monday, they just showed up and worked," Campsey said. "They came and had a great practice. They never stopped believing. I think that playing as well as they did against Cameron, obviously it was a big rivalry game for us, but the word of the day was confidence. They needed confidence to feel like they could play well again.”

Following that blowout victory over the Yoemen, Rockdale rattled off consecutive wins over Caldwell and Academy, scoring a combined 99 points.

The Tigers are now led by Valdez on the offensive end. Through eight games, he has run for 1056 yards and 17 touchdowns. He holds the Rockdale record for rushing touchdowns in a career.

Last week, he announced he plans to play football Texas Tech next fall.

As a result, the Tigers hold the second strongest offense in Bell County, averaging 396.5 yards per game.

“We can be beat, so we have to come out prepared everytime, every practice, every game, anything we’ve gotta be prepared for,” Ellison said.

The Troy Trojans entered the 2020 season with several new faces taking the field after losing several seniors to graduation.

"All the seniors last year, they've led us to where we are now," junior linebacker Kadin Workman said. "Everyone told us that without those seniors, we wouldn't be anything. We just want to prove all of those haters wrong."

After stumbling out of the gates to Top 10-ranked Salado, the Trojans won five of their next seven, including victories over Lorena and Cameron Yoe.

The Trojan offense is spearheaded by star running back Zach Hrbacek, who was ranked in the Top 5 nationally in yards after 6 weeks.

Hrbacek is averaging 287.1 yards per game. He has scored 32 touchdowns.

But, in order for the Trojans to earn a win over Rockdale, they will have to rely on more than the senior standout in the backfield.

Hrbacek was absent during the Trojans' 21-6 win over Caldwell in Week 9. Head Coach Ronnie Porter would not reveal why Hrbacek did not play and would not comment on his status for their matchup with Rockdale. Hrbacek was not at practice Wednesday afternoon.

Still, his teammates say they believe they can rise to the occasion with or without him.

"There's a lot of energy building up to this week," Workman said. "There's been a lot of energy in practice, focus and high intensity. Just to be able to have the chance to play Rockdale for a district championship feels good."

For Troy to be successful Friday night, they will need a strong performance on the defensive side of the ball.

In its first two district games, Troy allowed an eye-popping 108 points to Lorena and McGregor. But, they turned a corner against Cameron Yoe, holding the Yoemen to just 20 points before shutting Caldwell's offense down in a 21-6 win.

"Those two games combined, I think we've gotten better defensively," Porter said. "So, we're just gonna rely on that and our run game."

Porter hopes his offensive line can meet the challenge, no matter who is in the backfield.

"It's great knowing we're the offensive line making all these record-breaking touchdowns and yards," Westbrook said.

At this point, players say only one record matters, going 1-0 this week.

“It will be a great battle," Valdez said. "It was last year. It was a shootout for like the first three quarters, then they started to break away a little bit. I’m looking forward to seeing him on the field, and seeing what they can do against our new defense.”

The winner will control its own destiny in the race for a district title.

Rockdale, Troy and Lorena each enter Week 10 with 3-1 records in District 11-3A I. Troy already beat Lorena earlier this year, so with a win over Rockdale and a win over Academy (or another Lorena loss), the Trojans would finish atop the district. Rockdale plays Lorena Week 11, so with a win over Troy, the Tigers would put themselves in position for a 'winner-takes-all' matchup with Lorena next week.

"We're just out here competing for a district championship this week," Westbrook said. "Whoever wins this controls their own destiny. So we're all ready, pumped up for it, and ready to go out there and compete."

As always, you can see highlights and a live report from the Game of the Week in the Red Zone at 10 p.m.