Red Zone Game of the Week: Lorena vs. Rockdale 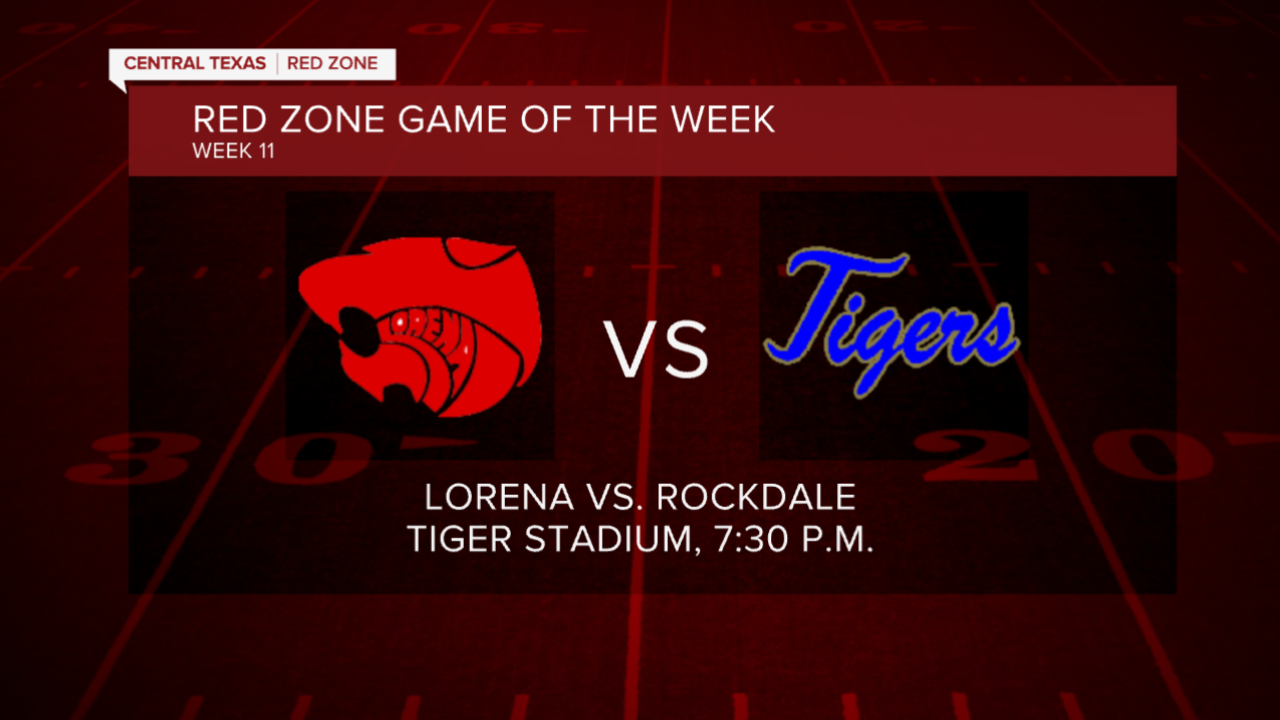 ROCKDALE, Texas — On the final week of the high school football regular season for 1A-4A schools in Central Texas, Lorena travels to Rockdale for a district title showdown against the Tigers. The winner will come out on top of District 11-3A I.

The Lorena Leopards enter Week 11 riding a three-game district win streak, including a 48-10 domination of Caldwell one week ago.

It is the longest win streak Lorena has enjoyed this season, after a rocky start to the year.

After beating Top 10-ranked Franklin in the first game of the season, Lorena endured a rocky stretch of games. The Leopards lost to China Spring 42-13 in Week 2. The following week, they were forced to cancel their game against Gatesville as they pulled into the stadium due to a positive COVID-19 test.

More than 20 players were isolated or quarantined as a result.

"2020 has not been a routine in any way, form or fashion," Biles said. "We talk all the time about getting outside our comfort zone. We've all gotta get outside the zone. And that goes for old coaches too."

Over the course of the season, Biles has called on several players to play on both offense and defense, in an effort to make up for the gap left by those stuck in quarantine or out with injury.

"This is my first year to play offense since like seventh grade," senior linebacker Jackson Pitts said. He was asked to play tight end during the outbreak. "So, it's been fun. It's been challenging, but I really like working with the offensive guys."

Surprisingly, the Leopards found their stride during the outbreak. Lorena won five of its next six games, including four of five in district play.

"Between injuries, COVID, quarantine and all the crazy stuff that's going on out there, just having the same 11 guys on offense and defense out there has been critical for us," Biles said.

Senior quarterback Ben Smedshammer, a Midway High School transfer, has excelled during district play. He has thrown for 1,107 yards and 11 touchdowns this season. In addition, he has run for 301 yards and seven touchdowns.

Lorena has scored more than 40 points in all but one district game.

Now, the Leopards are in contention for a district championship, meeting a goal Biles said the team set in January.

"That's where we were hoping and planning to be from the get-go," Biles said. "Sometimes it happens, and we're blessed to be there this year, and sometimes you fall a bit short."

Players said the energy in practice this week has risen to another level.

Rockdale endured a similar slump in the early part of its season, falling in three consecutive games during Weeks 3-5, including a loss in their district opener to McGregor.

The slump came after star quarterback and Rockdale senior Jace Robinson was ruled out for the season with a broken leg.

"He played a really great part. He still is," Dansby said. "And with the three loses, people just thought we weren’t going to be anything, but we proved them wrong obviously.”

As quarterback, Mitchell has turned Rockdale into one of the most potent offenses in Central Texas. Through nine games, the Tigers are averaging more than 410 yards, the most in the region.

“We had to go out there and make a statement," Dansby said. "We had to show that we’re a team to beat. We’re not to be played with. It’s a part of our revenge tour.”

The Tigers' "revenge tour" was actually a motto created by Rockdale Head Coach Jacob Campsey. After losing to McGregor, he said he wanted to find a way to motivate his team going forward.

“I was sitting in my office one day trying to figure out what to tell them," Campsey said. "And I was just thinking, 'These guys worked so hard to avenge those two loses the past couple years.' So, I write a letter to them every week, and I think I put it on there and they just saw it and bought into it.”

The Tigers have managed to exact revenge on several of their biggest rivals this season.

Rockdale broke its losing streak by taking down county rival Cameron Yoe for the first time since 2017, in a dominant 42-9 win. Last week, they ended a two-game losing streak to district rival Troy with a 46-38 win.

“It proved that we could play like a team after the adversity we faced over the years," senior linebacker Chase Mayfield said.

Now, the Tigers have the chance to win their first district title since 2016. Rockdale did not win a district championship during their 2017 state title season.

“This would mean a lot to our school, and a lot to our community," Mayfield said. "I think we’re just going to go treat it as any other game. Just play our hardest and give it all we can.”

This is the first time the two schools have played since 2013, when Rockdale knocked Lorena out in the first round of the 3A playoffs 55-36.

The game features one of the most tenured head coaches against one of the newest. Ray Biles has coached in Lorena for more than 20 years. His opponent, Jacob Campsey is in his first year as the Head Coach in Rockdale.

The winner secures a district championship and the No. 1 seed in District 11-3A I. The loser could fall to No. 3 in the district, depending on the results of other games across the district.

You can watch highlights and a live report from the Game of the Week in the Red Zone at 10 p.m. on KXXV.