Red Zone Game of the Week: Crawford vs. Bosqueville 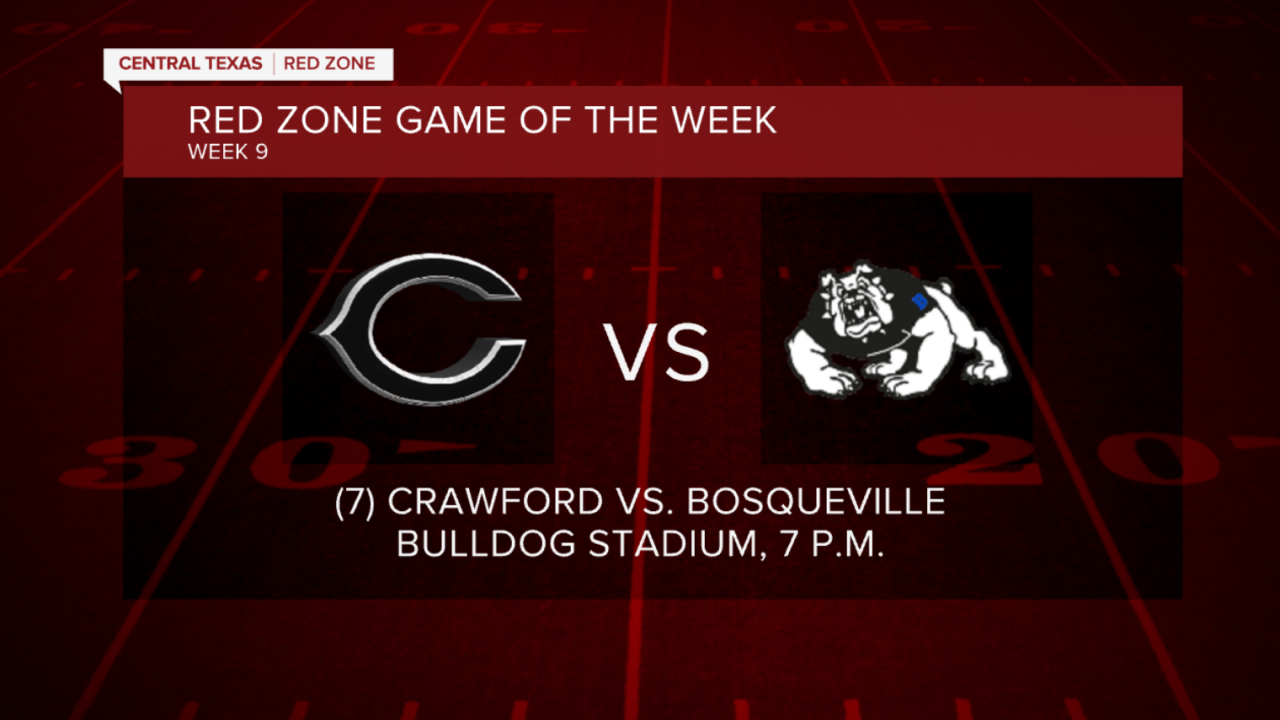 BOSQUEVILLE, Texas — After running the table through the first seven games of the season, the No. 7-ranked Crawford Pirates will face their toughest opponent of the season when they travel to Bosqueville to play the Bulldogs in the Red Zone Game of the Week.

Both teams enter the game tied for first place in District 7-2A I, meaning the winner will take clear control in the race for a district title.

The Crawford Pirates experienced an off-season filled with transition, but that uncertainty has done little to slow them down.

His first off-season was cut short because of COVID-19, causing unexpected challenges.

"In this era right now, you've got so many questions surrounding each and every day," Jacobs said. "So [the players] are just excited to get out and have the opportunity to play."

But, compared to other new coaches, Jacobs's transition was smooth. He inherited a team with 10 seniors, most of whom get considerable playing time.

Jacobs kept several of the same schemes from his predecessor, both offensively and defensively. As a result, the Pirates have opened with seven consecutive wins.

"He's been coaching us on the side since the seventh grade," Crawford senior quarterback Tanner Merenda said. "He knows each of us, our families. He's guided us through it and been there with us, so we've just been supporting him and he's been supporting us."

Through the first seven games, the Pirates defense has continued its dominance, allowing more than eight points just twice. They have pitched three shutouts this year.

On offense, the Pirates are averaging 49 points per game through their first three district games.

"It makes all the difference in the world," Jacobs said. "Our seniors have been leaders throughout the year, and over a period of time, these younger kids have really responded to the senior leadership."

The Pirates have one more major test before claiming the ultimate prize of a district title Friday night against Bosqueville. Jacobs said they have not discussed the importance of the game in practice, but players say it is pretty obvious.

"This is no doubt in my mind for the district championship," Crawford fullback Garrett Pearson said. "I think we're ready on all levels to take on that challenge."

"We knew this was gonna be the district championship this week. We've been working our way up to this game," Merenda said. "That's my old school. We want them real bad. They want us, so it's just a big rivalry game."

The Pirates have only one additional district game left on their schedule. Crawford's game with Itasca was canceled after Itasca canceled its season due to a lack of players.

Bosqueville jumped out to a quick 3-0 start to district play, beating its first three opponents by a combined score of 148 to 28.

The Bulldogs have not lost a game since September 11.

“We’ve just gotta stick together," Bosqueville quarterback Luke Bradshaw said. "We have to be family like we always are. If we stick together, we always hold each other up instead of bringing them down. We will be very successful.”

Bradshaw and the Bosqueville offense have been explosive in their first six games. They have yet to be held to fewer than 25 points.

In district play, they have taken it a step further, scoring 31, 49 and 68 points in their last three games.

“It all starts with the guys upfront," Bradshaw said. "As long as they do a good job, then we are going to be very successful. We’ve got a great set of running backs, a great set of receivers, and a great job on the offensive line and it makes my life a whole lot easier.”

But, for all the success the Bulldogs have seen on offense, their defense has struggled through much of the season.

Week One, Bosqueville allowed 62 points to Holland. They allowed more than 20 points in each of their first four games.

However, the Bulldogs have turned things around in the last two weeks against inferior district competition. They shut out Itasca and allowed only seven points against Valley Mills.

Bosqueville and Crawford have been rivals for more than three decades. The first recorded match-up between the two schools occurred in 1986, according to lonestarfootball.net.

However, over the first 34 years, Bosqueville has yet to record a win over the Pirates.

"I have been here 17 years," Zander said, "and we have yet to beat them then. From what I know, I don’t think Bosqueville ever has.”

“All these guys, we’ve never beat Crawford in football," Bosqueville linebacker Nick Womack said. "Never. Not once. Our towns are so close, and so it makes a big rivalry. We love it.”

Now, the two are in the same district for the first time since 2015, playing for a clear lead in the race for a district crown.

“In my four years here, this is the most physical and intense week of practice I have ever had," Womack said. "I’ve never been this hype and excited for a game and seeing how excited everyone else is, it makes such a great atmosphere. We think this is the year.”

Kickoff between the Bulldogs and Pirates is set for 7:00 p.m. in Bosqueville.

You can catch highlights in the Red Zone at 10 p.m.