Red Zone Game of the Week: Academy vs. Lorena 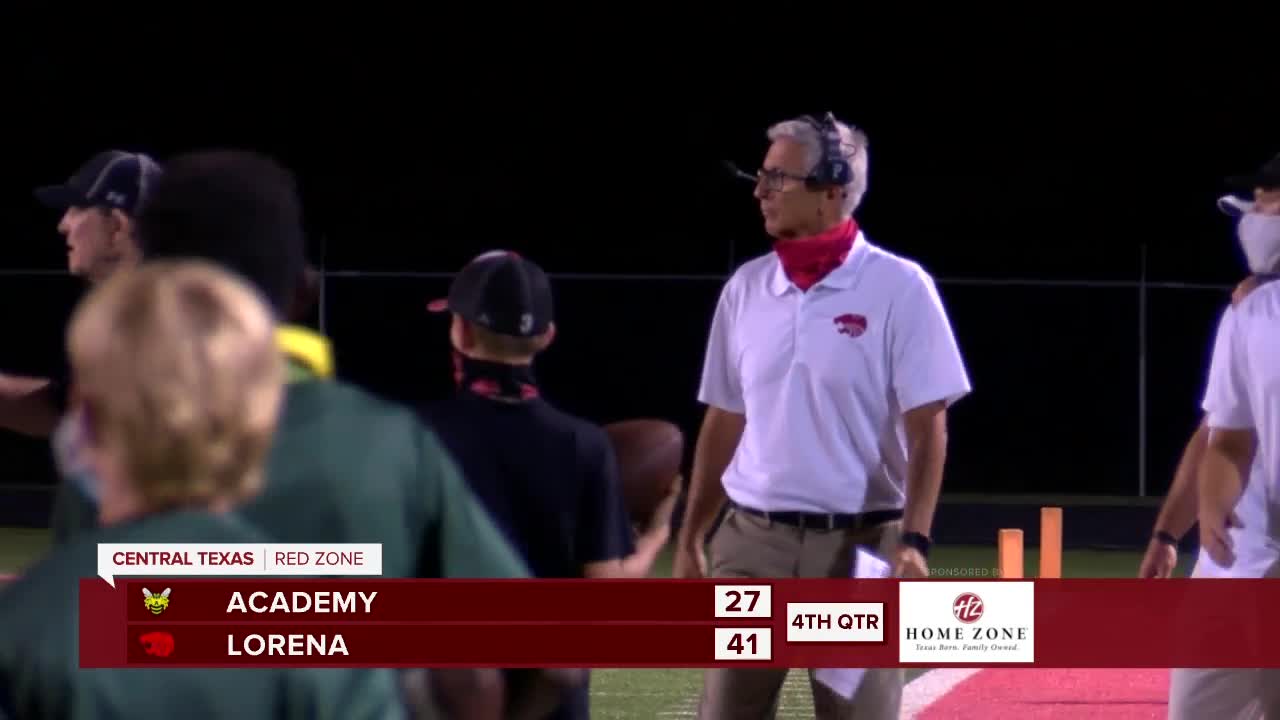 Game of the Week: Academy vs. Lorena

As the Texas high school football season moves into Week 5, several schools are gearing up for the start of district play.

Friday night, the Lorena Leopards will host the Academy Bumblebees in a game with major playoff implications during the Red Zone Game of the Week.

Entering the season, expectations for the Bumblebees were slim. Academy was projected by Dave Campbell's Texas Football to finish fifth in District 11-3A I and miss the playoffs.

But, through their first four games, all they have done is win.

"The energy is there," junior running back Darion Franklin said. "We're all just playing, flying around and making big plays, and that's what we've been trying to do for the last couple years."

Under first year head coach Chris Lancaster, the Bumblebees are trying to defy expectations. Lancaster joined Academy from Troy, where he served as the Trojans offensive coordinator.

Coaches and players say the heart of their success is defense.

Through four games, Academy has allowed just 25 points. They pitched shutouts in each of their last two games against Groesbeck and Lago Vista. The Bumblebees have also forced several turnovers.

"We're playing hard. And we're gonna make mistakes, and we make them all the time. But as long as we are going fast and playing hard, we can overcome some of those mistakes," Lancaster said.

That consistency has been harder to find on the offensive side of the ball. Behind quarterback Jerry Cephus, Academy has only put up 24 points per game.

Lancaster said one major issue this season has been stopping penalties. He believes if they can be more disciplined on offense, they could be a dangerous team this fall.

"Going through teams and winning this year, it's been really good," Cephus said. "We're just learning the system as we go on."

They hope to ride that momentum into a key district clash with Lorena, who was projected to earn the district's final playoff spot.

"Their defense is alright. They've got some quick little boys over there, so it should be fun. But I'll take my boys over theirs any day," senior receiver Kollin Mraz said.

With a win, Academy would move one crucial step closer to defying the odds and making the playoffs.

"Now, we're in the grind," Lancaster said. "And this is a hard district as we all know. And it starts with Lorena Friday night."

Lorena opens district play on the heels of one of the most up-and-down non-district schedules in the state.

After beating then-No. 8 Franklin week one by stopping a last-minute two-point conversion attempt, the Leopards fell by more than 30 points to crosstown foe China Spring.

Week Three, the Leopards were forced to cancel their game with Gatesville just minutes before kickoff because a player tested positive for COVID-19.

"We lost a ball game and everybody sat there and just looked at each other," Lorena Head Coach Ray Biles said. "I said, 'Guys that's what we talk about, control the little things: your attitude, your effort, your work ethic, the things that you do. And let's go out and make sure we're ready to play.'"

Last week, the Leopards bounced back by playing their best game of the season, knocking off Madisonville with just 28 active players.

It certainly is not how Lorena planned things in early August, but they say the ups and downs have made them stronger.

"I think it was a blessing in disguise. We bonded together. We started playing more for each other," senior linebacker Aidan Ray said.

According to Biles, the Leopards will be shorthanded once again this week because players are still quarantined.

"It's not an offense and a defense now," he said. "It's us. With that in mind, we've gotta be able to prepare for a lot of situations where kids go both ways."

For players like quarterback Ben Smedshammer, dealing with the unexpected has afforded a new opportunity to grow.

"Everybody really came together," he said. "The whole week of practice, we didn't have a true offense or a true defense. We had a lot of guys going both ways, and a lot of guys stepped up where they need to step up."

Lorena hopes that growth pays off against Academy and the roller coaster season only goes up from here.

"Any challenge that's occurred to us, we've come together as a team, and we've persevered," Ray said.

Kickoff between Academy and Lorena is set for 7:30 p.m.

You can catch highlights and a live report from the Game of the Week in the Red Zone Friday night at 10 p.m.