Red Zone Game of the Week 7: Salado vs. Connally 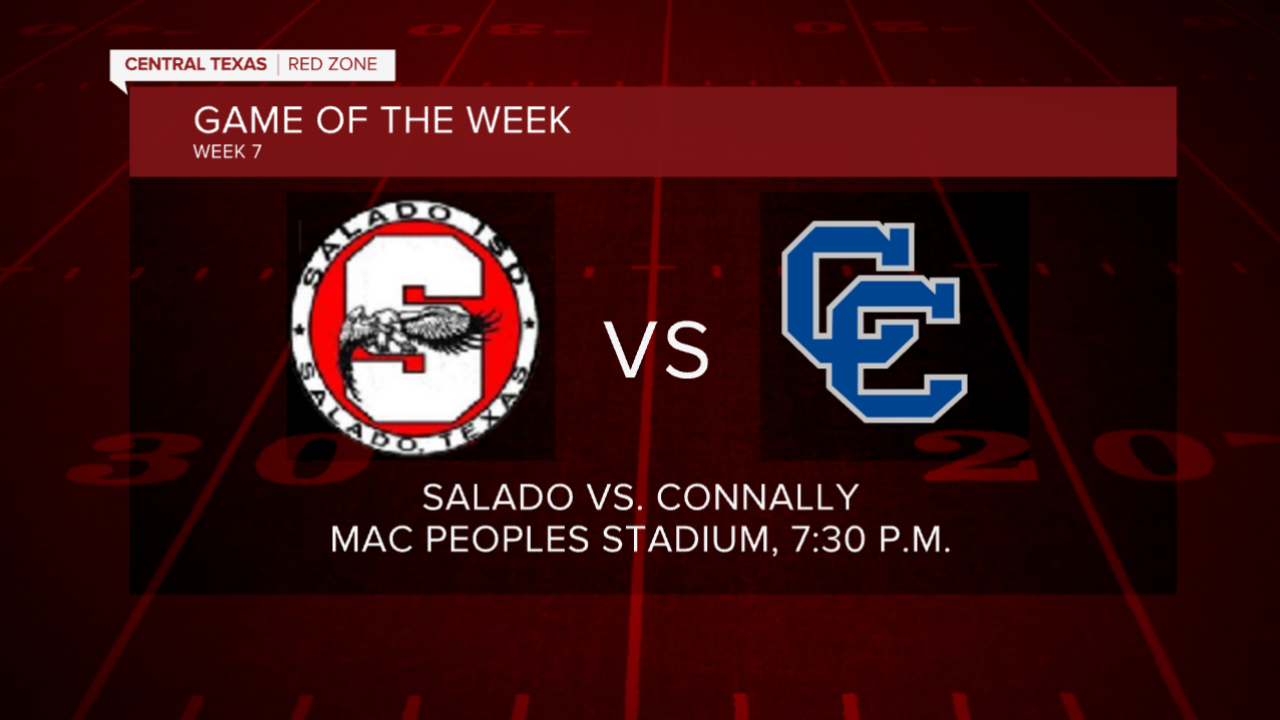 WACO, Texas — As we near the midpoint of the bizarre 2020 high school football season, district title races across Central Texas are heating up, including in District 9-4A II.

Friday night, the Salado Eagles will travel to Waco Connally to take on the Cadets in our Red Zone Game of the Week. The winner will take early control of the district and gain needed confidence headed toward the end of the season.

The Salado Eagles enter the contest on a four game winning streak. Their only loss so far this season came at the hands of reigning 3A-I state champion Grandview.

Through six games, Salado is averaging a whopping 43.2 points per game. If you throw out the Grandview game, that number rises to 51.8.

The Eagles operate a Slot-T run-based option offense, typically known more for game control than high-octane scoring. But so far, they have rushed for 2416 yards, compared to only 193 yards passing. They average 434.8 yards per game.

"We try and make the other team submit," senior linebacker Peyton Miller said. "So the longer you go, and the more physical you play, the more you will achieve that.”

Miller is the leader of an Eagle defense which has allowed just six points in the last two weeks combined. He was named the district's Preseason Defensive MVP by Dave Campbell's. Last season, he was First Team All-District with 93 tackles and six sacks.

“He’s intelligent and easy to coach, because he takes it serious," Salado Head Coach Alan Haire said. "He’s so smart. He calls defense by formations. He gives great effort, and you love to see good kids have good things happen for them.”

Defensively, the Cadets face a tougher challenge in Week Seven, as they take on a physical, run-heavy program at Connally.

“We’ve worked on the run-game a lot this week and read the key," Miller said. "We try to read formations and what's happening.”

This year, Salado's team motto is "Get To," in response to the constant uncertainty surrounding football in the COVID-19 pandemic.

“We are just glad that we get to, and we want to take advantage of each day that you have the opportunity to get to," Haire said. "Because you don’t have to do anything, you get to.”

So far, the Eagles have remained relatively unscathed by the virus. They have yet to have any games postponed or canceled during the 2020 season.

“It feels really good to be this far into the season, and still getting to play," Miller said. "It's amazing being a senior. It’s been really fun.”

Salado begins its toughest two-game stretch of the season Friday, playing Connally before playing No. 6 China Spring. With a pair of wins, they would become the clear favorite to finish atop District 9-4A II.

The Connally Cadets enter the key Week Seven matchup on the heels of a dominant 49-7 win over Robinson to enter district play. It was a much-needed breather after going through a gauntlet of top-ranked teams during non-district play.

The Cadets opened the year against a Top 10-ranked Sunnyvale before playing 4A-I No. 1 Connally and reigning 4A-I state-semifinalist Springtown. In that stretch, the Cadets went 1-2, losing both games by a combined 13 points.

"I feel like our team grew a lot in those early games," Connally Head Coach Shane Anderson said. "Last year, I said we could have used a few more tough non-district games to maybe help us get over the hump in the playoffs."

Under Anderson, the Cadets have asserted themselves as a physical, hard-nosed football team. Anderson said when he interviews prospective coaches, he makes sure they know his team's style.

That hard work has paid off for the Cadets. Last season, Connally won a district title en route to an appearance in the regional semifinals. At the core of that success was a strong running game.

The Cadets have been blessed at the running back position under Anderson. Jay'Veon Sunday took Central Texas by storm two years ago, rushing for over 2,000 yards his junior season before eventually signing to play Division I football at Washington. He left big shoes to fill in the Cadet backfield.

“Jay’veon really set the tradition by being such a great running back and being a leader," senior running back Kavian Gaither said. "It’s our job, me and Tre [Wisner] to get what we can.”

So far, the Cadets have gotten plenty out of Gaither. The senior leader has continued Connally's strong rushing attack, carrying the ball for 691 yards and five touchdowns.

More than that, he has filled a leadership role.

Coaches across the district say they are impressed with his performance this year.

"They have the best player in the district, Gaither, number nine coming back," Haire said, while discussing the Cadets. "They’ve got some talent up front, so great program."

Gaither is also working to train the next young star running back, Tre Wisner. So far, the sophomore has 384 yards on just 30 carries. He has scored a touchdown once every five times he has carried the ball.

“He’s real fast," Gaither said. "He has all the intangibles to be able to play at the next level. He just needs to keep working. He’s a real determined kid for his age.”

“It’s not necessarily who can make the biggest plays," Anderson said. "It’s gonna be who can play the hardest and the most physical the longest. And if we can match them for four quarters, it’ll be a heck of a ballgame.”

You can catch highlights and a live report from Mac Peoples Stadium in the Red Zone following the conclusion of NBA Finals Game 5.