Red Zone Game of the Week 6: Cameron Yoe vs. Rockdale 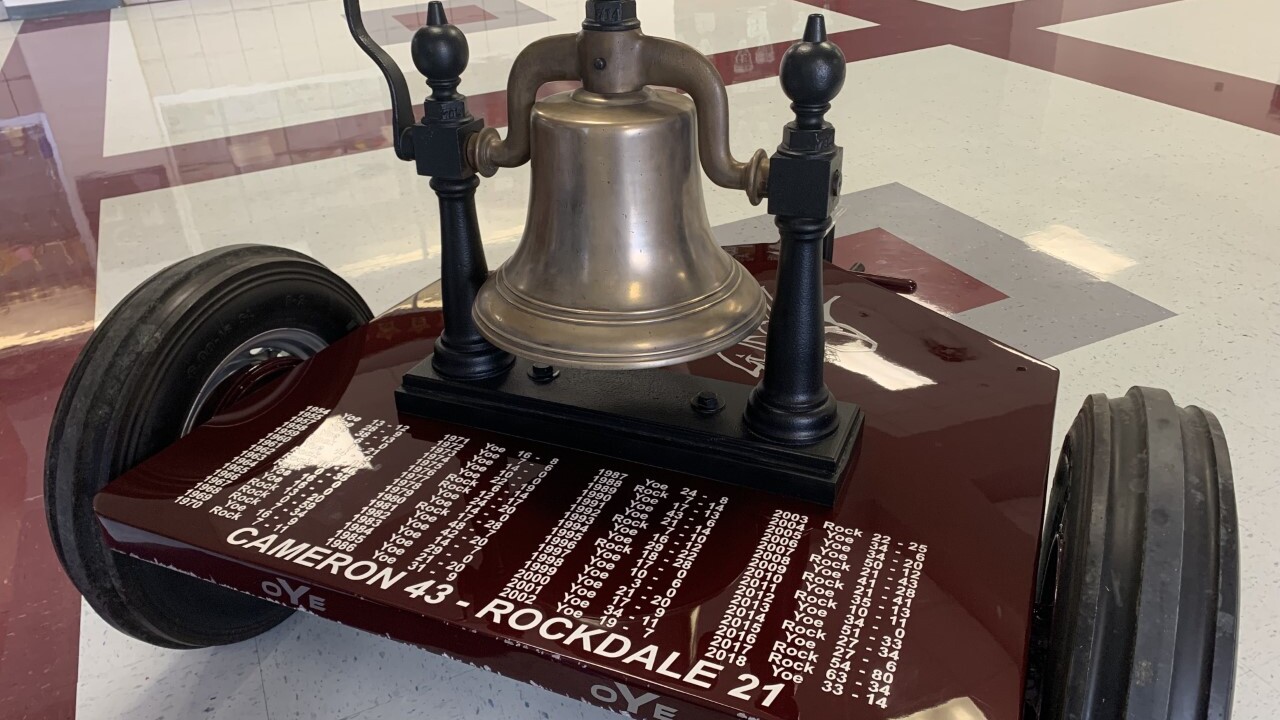 ROCKDALE, Texas — Few rivalries in Central Texas compare to the history and ferocity of the Battle of the Bell in Milam County. Friday night, Cameron Yoe and Rockdale will renew that rivalry for the 66th time when they face off in our Red Zone Game of the Week.

The Yoemen entered the 2020 season with high expectations, ranked in the 3A-I Preseason Top 10 by Dave Campbell's Texas Football. But in their first two games of the season, they struggled.

Week One, Yoe squeezed out a 21-16 win over Mexia before getting blown out by Bellville in their second game of the season.

But success along that stretch of Highway 77 in Milam County is not judged by preseason rankings or non-district performances. It's judged by one game: The Battle of the Bell against Rockdale.

"The kids are going to come out and play hard for both schools, both towns and both communities," Yoe Head Coach Tommy Brashear said. "It's a big deal. From the little kids all the way up, everybody wants to play in this game against Rockdale."

The Yoemen lead the all-time series 44-21. Last season, they beat the Tigers 31-3 to keep the bell in Cameron for another season.

"It means a lot to the community," Yoe senior Eduardo Gil said. "We're just trying to keep the bell here as long as possible.

The 2010s featured some of the best football in the rivalry's history. Yoe won three state titles in the decade, while Rockdale lifted the trophy in 2017.

This year, neither team currently sits in the state's Top 10. However, after stumbling out the gates, Yoe enters the rivalry on a roll. Cameron has won each of its last two games by an average of 28 points.

Brashear said his team's strength has been the way it has responded to adversity. He thinks they have found a way to improve every week. They will try to improve again against Rockdale.

"It means a lot just to keep the bell," Yoe senior Zakorien Spikes said. "We want to be remembered as the team that kept the bell here too."

Brashear has several fond memories as both a coach and player on the Yoe sideline. He said some of his greatest memories involved the pranking typically associated with the rivalry during its early years.

According to Brashear, students used to try to steal the bell, paint logos on signs and engage in other tomfoolery in the week leading up to the game. While most of that has died off in recent years (students do not try to throw the bell in the river), he says the rivalry is still in full force.

"If you win, you feel like you've done what you're supposed to do," Brashear said. "You've held up your end of the bargain for your school and community and kids a family."

Brashear said he's experienced a wide range of emotions playing in the famous rivalry, from the joy of ringing the bell after a win, to the gut-wrenching feeling of defeat.

"The closest thing I can say is losing a loved one," he said. "I've lost a loved one and I know it's not the same, but it's that feeling in your gut and you feel like you've let your community and school down."

First-year head coach Jacob Campsey did not anticipate his team's start to the 2020 season.

After dealing with the pandemic during the off-season, Rockdale lost one of its senior leaders to injury when star quarterback Jace Robinson broke his leg during the Tigers' matchup with Giddings.

"So many thoughts flood your head," Campsey said. "The amount of work that kid has put in, the amount of leadership he has for this whole senior class. He just lives it and for something like that to happen, it was really just unthinkable."

In 2019, Robinson threw for more than 2,000 yards and 33 touchdowns during his junior campaign, leading the Tigers back into the playoffs.

He said he knew something was wrong right away.

"The first thing I told my mom is that God has a plan," Robinson said. "It's pretty unfortunate, but it really opens up my eyes and puts things into perspective."

That fresh perspective opened new doors for the injured star. While he rehabs his leg, Robinson has transitioned from the role of field general to player-coach.

"He's a coach," Campsey said. "It's really fun to watch. You can tell any time we're going through some struggles, he's the first one to go to his teammates, pick them up and tell them 'You gotta step up and be a leader out there.'"

The Tigers have missed his leadership on the field early this season. After beating Giddings and Taylor to start the year, Rockdale dropped its next three games, including a 49-40 upset loss to McGregor to open district play.

But coaches on both sides of the rivalry say during the Battle of the Bell, you can throw records out the window.

"There's so many good ones," Campsey said. "Obviously, the years we won. In '14, I remember storming the bell after the win in Cameron. That was a sweet one because it was over there. It's incredible to see the amount of people that enjoy watching this game."

Robinson said he is sad he will not be on the field for his final Battle of the Bell, but he hopes he will be able to help push Rockdale to a win from the sidelines.

"I don't envy them at all. It's just getting to see your brothers go out there and do what they've dreamed about doing since they were little kids. It's pretty awesome," Robinson said.

According to Robinson, there is a chance Rockdale could see their star quarterback take the field before the season ends. He said he is already lifting weights and starting to incorporate his lower body into workouts.

"It's made me confident that I'll have a good comeback from this and hopefully get to make a story out of it," he said.

For now, he will stand on the sidelines rooting for a major turnaround.

Kickoff for The Battle of the Bell is set for 7:30 p.m. Tickets have been sold out since early this week.

As always, you can catch highlights from the game in the Red Zone, which will air following the conclusion of the NBA Finals Game 2.