Game of the Week: Whitney vs. Rogers 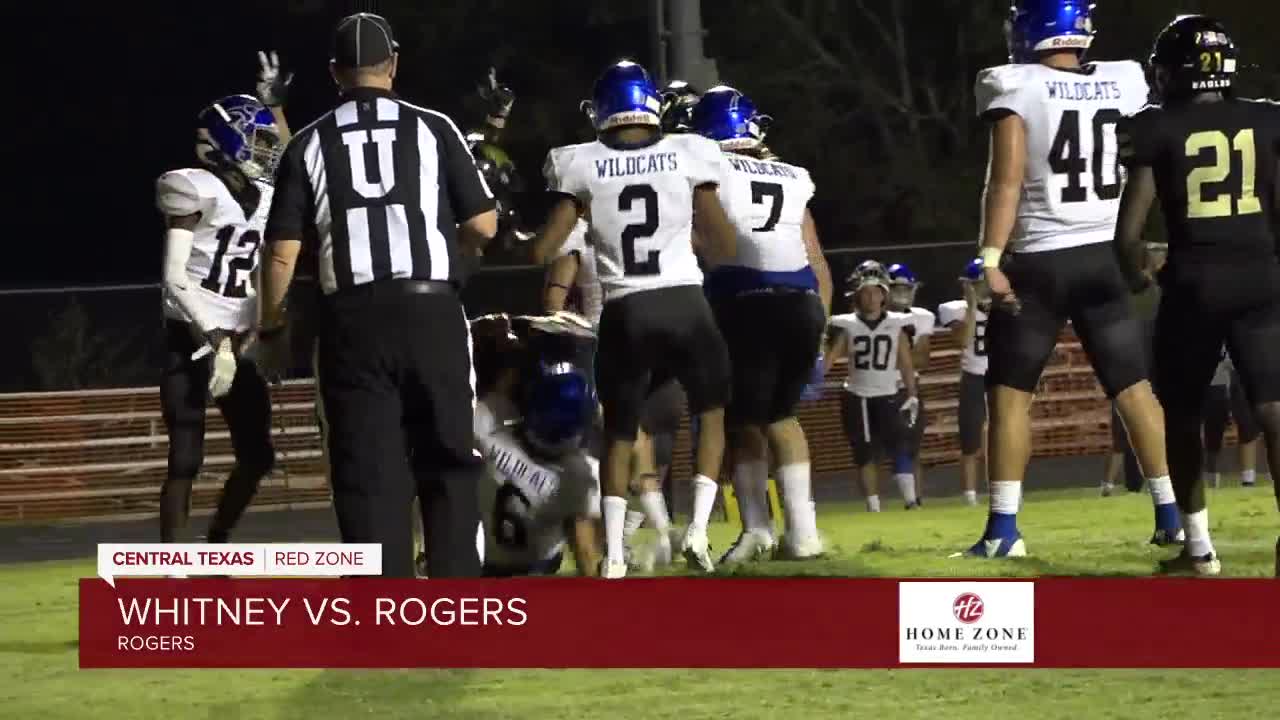 Game of the Week: Whitney vs. Rogers

After two breakout 2019 seasons, the Whitney Wildcats and Rogers Eagles entered the season with sky-high expectations. But after lackluster starts, both teams are looking for a boost in momentum in the Red Zone Game of the Week.

The Whitney Wildcats made a historic run during the 2019 season, reaching the state quarterfinals for the first time in program history.

On their way, they also knocked off eventual state champion Grandview to earn a district title.

The success brought on high expectations for the 2020 season. Whitney entered the year ranked in Dave Campbell's 4A-I Top 25.

However, the Wildcats stumbled out of the gate, falling to Quinlan-Ford before shutting out Robinson 41-0 in Week 2.

"Getting beat week one hurt," Byrd said. "We went down to Quinlan and we just weren't ready right then. Then to go out there and only allow 85 total yards of offense. I mean those are the things we can do.”

“Dawson has taken a leadership role," Byrd said. "He is now a three year starter. He takes ownership of that defense and gets us lined up.”

Junior quarterback Garrett Peacock has stepped into a leadership position for the Wildcats on offense, helping them average more than 37 points per game.

“He’s very controlled. He’s very coachable, and he see’s the field really good. There’s nothing like having another coach on the field,” Byrd said.

A year ago, he threw for 937 yards and nine touchdowns.

Rogers continues its tough non-district schedule against Whitney this week. The Eagles started the season with losses to two quality opponents, rising up a division to play rival Academy (2-0) before falling to a San Saba (2-0) team which has lost only two total games in the last two seasons.

Rogers Head Coach Charlie Roten said they were forced to play a tougher schedule this year after going 11-2 one year ago. It was the first time Rogers won 11 games in a season.

"The standard is always a championship title," senior receiver Ben Hutka said. "But, I mean, we never set an expectation. We just go out and play the hardest football we can. We've always been a team of hard work."

Riding the success from 2019, Rogers entered the season ranked No. 14 in Class 3A-II, despite losing an impactful group of seniors.

"It definitely sucks when you lose some really good, important players," senior linebacker John Hill said. "But we also have people stepping up. We actually have some freshman who are really good, so that's definitely keeping us going."

The Eagles' inexperience has hurt them in tight situations early this season. Their first two losses have come by a combined eight points.

"We're not quite as experienced as we were last year. That's played a part in it. But, we're getting better every week and that's what we ask the kids to do," Roten said.

They hope as the season progresses the close losses can turn into close victories.

"We're just really trying to just get everybody going again," Hutka said. "It's gonna take a while, but these tough preseason matchups, it helps us get ready for district."

For a program dealing with high expectations, this early bump in the road could mean trouble. However, its seniors say it is a chance for them to show off what makes both the Rogers community and its football team so special.

"We may not be the most athletic team, but we work hard," Hutka said. "And we do have a lot of talent, so if we work hard here in the tough time during practice, nothing can really stop us on the Friday nights."

Rogers is led by a stout defense, allowing only 22 points per game so far this year.

Hill was named Dave Campbell's Preseason District 13-3A II Defensive MVP. Paired up with senior lineman Ty Sebek, the Eagles hope their defense can carry them to their first win of the season.