Game of the Week: Holland vs. Mart 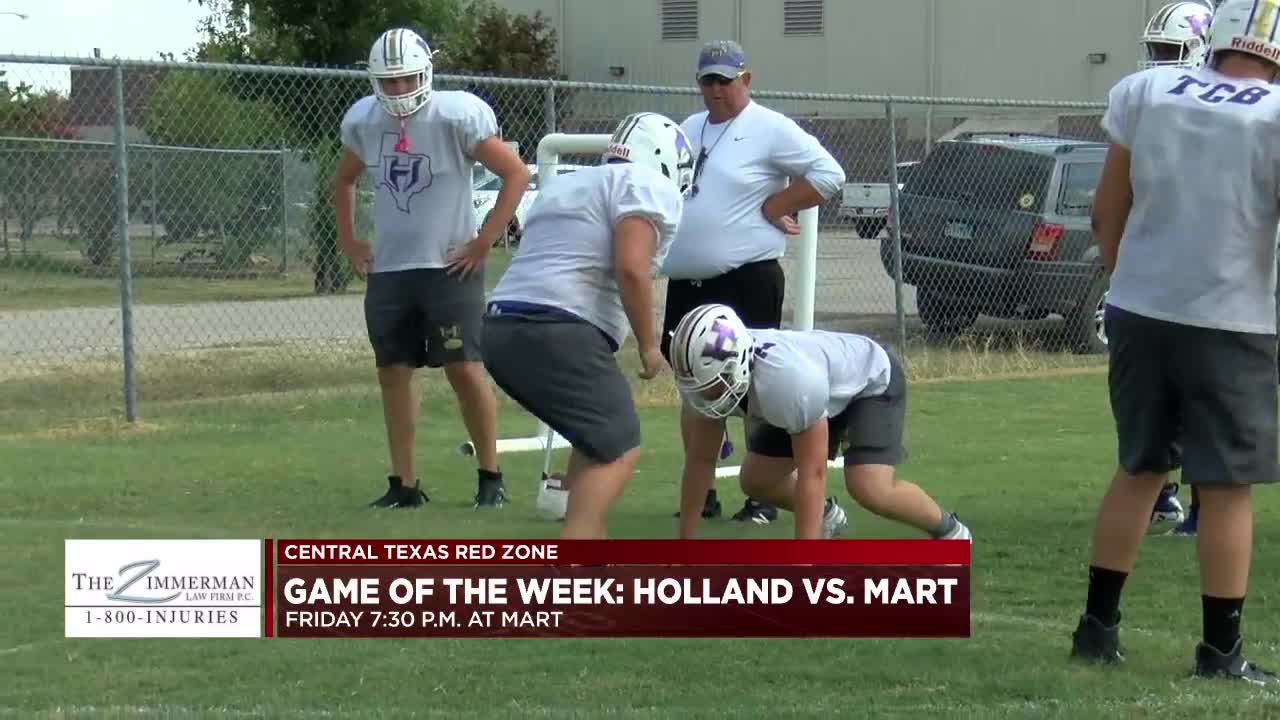 MART, TX — The 25 Sports team is headed to Mart this week for a top 15 matchup between the reigning state champions and the Holland Hornets.

"I know a bunch of people are thinking Mart's gonna stomp us, but I do have a lot of confidence in us and their a good team, but we're a very old team, a very veteran team. I mean, I think it's gonna be a great game," Zane Spinn, Holland's senior quarterback, said.

The Hornets took care of business week one, dominating Moody 64-6.

Holland Head Coach Brad Talbert says this is the most mature team he's had in his eight years coaching the Hornets, and when he looks at the roster, he sees a lof of different weapons opponents shouldn't overlook.

But, as they prepare for the number one team in the state, Coach Talbert's message to his team is simple.

He wants the Hornets to go out there, stick to the fundamentals and just play football.

"They're ranked number one and they've won the state championship back to back years. So, everybody knows who Mart is. So, it's easy to say, hey guys you gotta be on time, you gotta get there early, you gotta stay late, you gotta know your assignment," Coach Talbert said.

"Coach Talbert, he's been around a lot of schools, and I mean he knows Mart. There ain't many teams that go into Mart and just win. I mean like it's nothing. So, I mean he's definitely been bringing that to us and just trying to tell us to take it one game at a time, one play at a time and that should get us there. But mainly, just him telling us that Mart's no joke. They have a culture, they have a tradition and we gotta come ready to play," Spinn added.

Mart's known for playing fast. But as Coach Talbert reminded the 25 Sports team, the Hornets are fast, too. In fact, they brought home silver in the state track meet last year.

The focus this week for Mart has been just that, Mart.

Last year's Mart team made school history. For the first time, they won back to back state championships.

So, this year's group has their eyes set on a three-peat.

But, of the 21 guys on varsity, 12 are sophomores, young and inexperienced. Holland, on the other hand, is senior heavy.

Mart knows they'll get every team's best shot and that their game is the one circled on every team's schedule.

But, young or not, Mart tradition runs deep, and they're ready.

"They've known it since they were little, so it's easy. You just do your regular thing and they follow," Kyler Martin, Mart's senior quarterback said,

"You grow up here and you understand what's at stake here. You don't want to be that guy or you don't want to be that team that doesn't fulfill what the expectations are around here. So, these kids are gonna step up. They're gonna play hard. They're gonna give it everything they got. But again, the inexperience, the youthfulness and those types of things, we're gonna have to overcome," Kevin Hoffman, Mart's head coach, said.

Coach Hoffman added that this matchup will be a good chance for him to see where his team is at and what they'll need to improve on moving forward.

Kickoff for the Hornets and Panthers is set for 7:30 p.m. on Friday at Mart High School.