Red Zone Game of the Week: China Spring vs. Salado 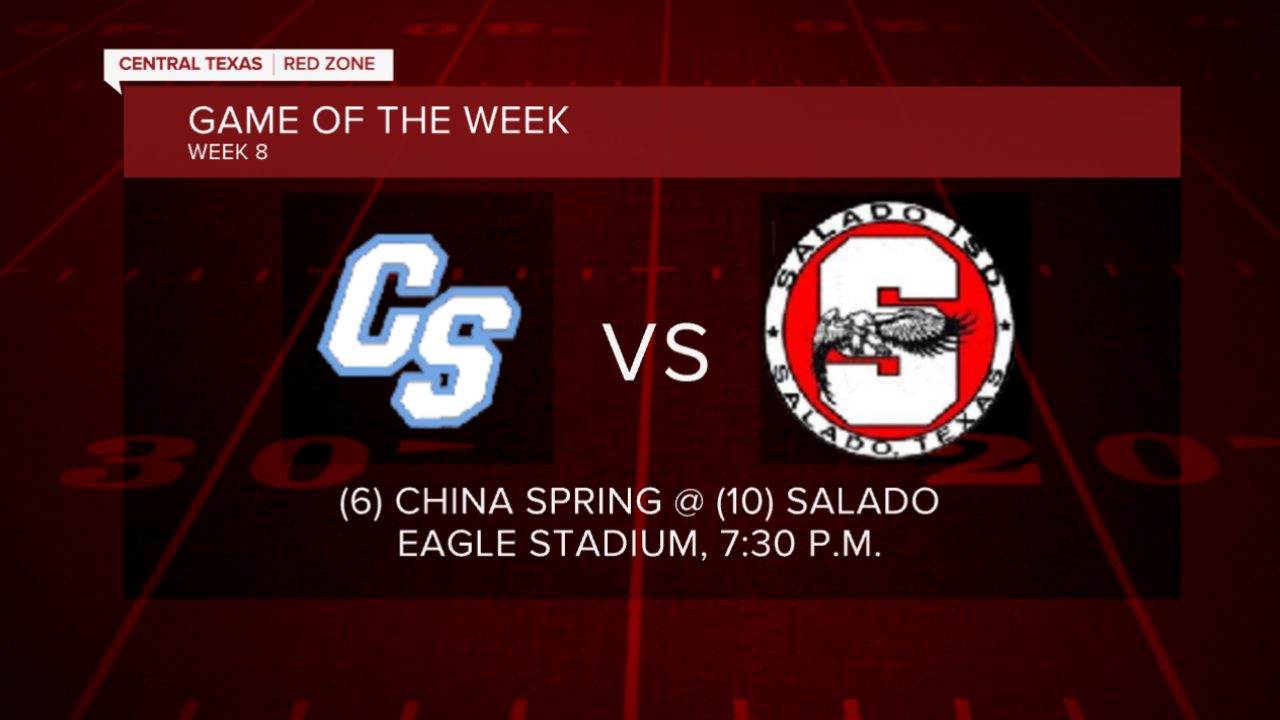 SALADO, Texas — For the second consecutive week, the Salado Eagles are in the Central Texas spotlight as they take part in a Top 10 battle with No. 6 China Spring in our Red Zone Game of the Week. The winner will take a clear lead in the District 9-4A II title chase after Salado knocked off Connally one week ago.

China Spring has experienced a breakout 2020 campaign. After entering the year ranked No. 18 in the state, the Cougars marched out to an unbeaten 6-0 start behind the dynamic backfield duo of junior quarterback Major Bowden and senior running back Emmanuel Abdallah.

"When you have two guys in the backfield, defenses can't zero in on one guy," China Spring Head Coach Brian Bell said. "They have to cover both of em. So, they complement each other. And when they're both fast and can do things with the ball, it makes the other guy's life easier."

So far, the pair have combined for 1,762 rushing yards and 23 touchdowns. As a team, the Cougars are averaging just over 50 points per game.

"Yes, they're fast, and they're a dynamic duo back there," Bell said. "But they've got like seven, eight, nine dudes there blocking for them, including the receivers."

After putting up 74 points in a Week One win against Fort Worth Benbrook, China Spring knocked off a ranked Lorena team 42-13. Their closest game this season was decided by 21 points.

"It's a team sport," Abdallah said. "You can't do it with one side. If the defense isn't playing great, and the offense isn't, you aren't going to be as good as if both sides are clicking. So, just seeing the defense fly around, they're amazing."

If you ask Bell, he will tell you there is still plenty of work to do, particularly as the schedule gets tougher.

For now, the Cougars are in excellent position to compete for a district title, one that could be decided in a Top 10 battle with Salado on Friday.

"Obviously, we know it's probably for a district title or to get a good placing in the district championship, but we just treat every weak like a championship," Bowden said.

However, both Abdallah and Bowden admitted the energy level in practice has gone up as they prepare for the Eagles.

"I tell the guys every week going into the football game, this is the biggest game in Texas," Bell said. "They ask why, and I tell them its because the China Spring Cougars are playing in it."

The Salado Eagles enter the contest riding a five-game win streak, including a big win over district rival Waco Connally a week ago. With the win, the Eagles temporarily sit atop the District 9-4A II standings.

Salado's only loss came at the hands of reigning 3A-I state champion Grandview.

For seniors like running back Noah Mescher, the success is not being overlooked.

"For a couple years, when I was growing up, Salado was really bad," Mescher said. "So, we were able to turn that around and we've been good now. And we're ready to go out and win more games."

In the last five years, Salado has turned into a consistent playoff team. In 2017, the Eagles managed to win a district title.

Head Coach Alan Haire says he sees a lot of similarities between that team and his squad in 2020, as they try to win a title of their own.

"Its probably one of the tightest teams I've had in terms of caring for one another," Haire said. "They just want the guys to their right and left to be successful."

One key to their success, running the old-school Slot-T offense to a tee.

Through seven games, the Eagles are scoring 41 points per game, up nearly 10 points from a year ago. Salado averages more than 400 yards of offense per game.

"We're just looking for about three yards, and if he busts more than that, that's awesome and icing on the cake," Haire said. "But really, we're just trying to generate some first downs."

Mescher has carried the bulk of the yardage for the Eagles so far this year. The senior has tallied 1,069 yards and 14 touchdowns, more than all but two backs in Central Texas.

"It's great," he said. "The offensive line has blocked well and there's been holes that I've been able to run through. So, as long as they keep blocking, I'll keep running!"

Salado can run into a clear district lead Friday night against China Spring, who will likely be their toughest opponent of the season.

"We know our hands are full with a great program," Haire said. "And it's a good stage for us. It lets us see how me measure ourselves against the best rather than just the average."

Players say they are hopeful they will be able to leave their mark on the program and continue its rise.

"This is probably our chance for a district title. So, if we get an opportunity we need to take advantage of the opportunity," senior linebacker Kofi Stoglin said. "And here we are."

Kickoff between the Cougars and Eagles is set for 7:30 p.m. at Eagle Stadium in Salado.

This is the first matchup between the two teams since 2012. China Spring won the matchup 42-7, but the two schools were in different UIL classifications at the time.

You can catch highlights and a live report from our Game of the Week in the Red Zone at 10 p.m.