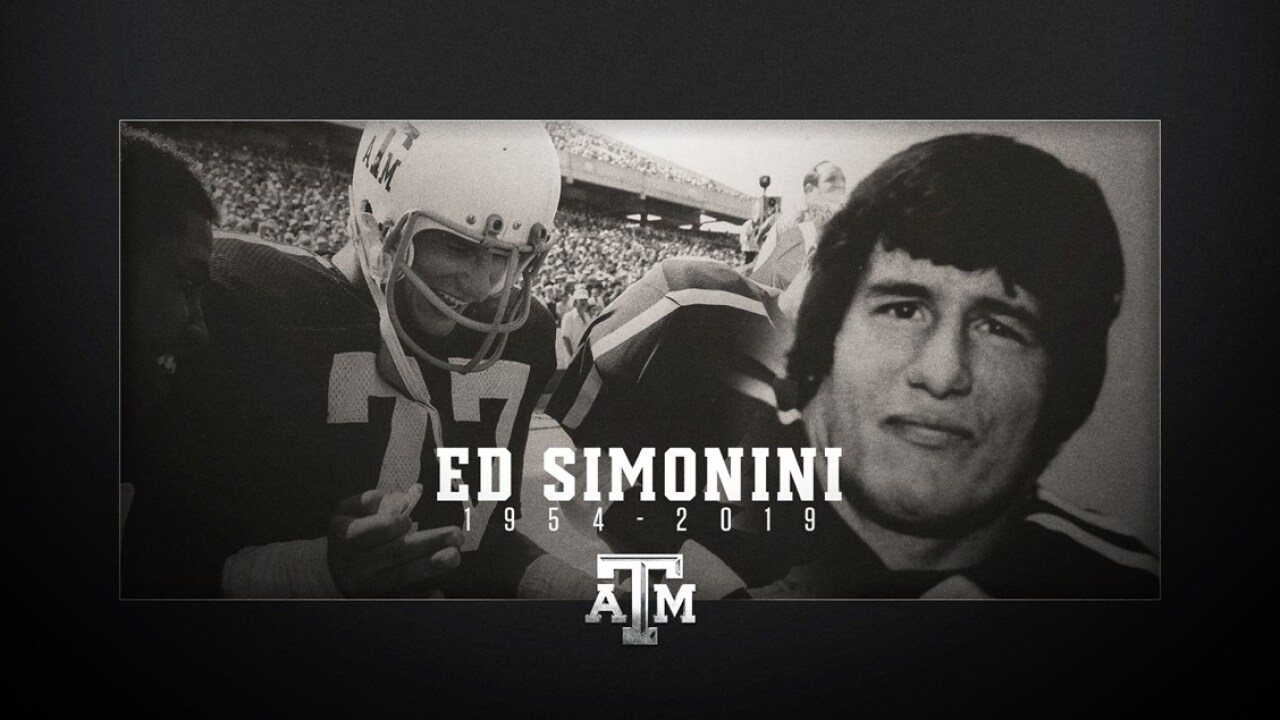 COLLEGE STATION, TX — Ed Simonini, a legendary Texas A&M All-America linebacker, has passed away after a battle with cancer, his family announced.

Simonini came to Texas A&M from Las Vegas, Nevada, where he played linebacker and running back at Valley High School. He was named both the offensive and defensive player of the year in the state as a senior.

Emory Bellard was named the Texas A&M head coach prior to the 1972 season. It also marked the first year for freshmen to be allowed to play on the varsity level since World War II. Simonini and his group of recruits helped put Texas A&M on the national map.

It did not take long for Simonini to make an impression as he won a starting role as a freshman and was the Southwest Conference Defensive Player of the Year as a sophomore as well as earning Associated Press second-team All-America honors.

Simonini was named a consensus All-American and Lombardi Award finalist in 1975 when the Aggies led the NCAA in rushing defense and total defense and allowed just 9.5 points per game. Simonini led the Aggies in tackles three straight years and was named to the All-Southwest Conference Team in each of those seasons (1973-75). He was the SWC’s Defensive Player of the Year twice and a member of the SWC’s All-Decade Team of the 1970s. He finished his career as the Aggies’ all-time leader tackler with 425 stops and he still owns the school’s freshman tackles record with 98 in 1972.

He was drafted by the Baltimore Colts in the third round of the 1976 NFL Draft and played seven seasons in the NFL. He led the Colts in tackles from 1977 to 1980 and helped the Colts reach the AFC Playoffs in 1977 winning the AFC East title.

Simonini was inducted into the Texas A&M Athletics Hall of Fame in 1982. His outstanding linebacker play along with his 1970’s linebacker teammates Robert Jackson and Garth Ten Napel was the precursor to Texas A&M becoming known as Linebacker U. when every starting linebacker from 1983 to 1998 signed a professional contract.

Just last week Simonini was poised to serve as the honorary captain for Texas A&M at the Sept. 28 game against Arkansas at AT&T Stadium in Arlington. He was also named to the 2019 SEC Football Legends class, announced Thursday by the Southeastern Conference.

Aggie College Football Hall of Fame Head Coach R.C. Slocum was an assistant coach on Bellard’s 1972 coaching staff and continued to serve on the defensive side of the ball for those outstanding defensive teams.

“I remember well when Ed first showed up at A&M,” Slocum said. “It was the first year that freshman were eligible to play on the varsity. Although he was undersized, he started and was a leader on our defense. He started for four years and got most of the awards one can get including All-American. His junior year we were number two in the nation on defense and his senior year we were the top-ranked defense in the nation. His play and leadership were instrumental in our success. Along with his success on the field, he was a very good student. In all of my years of coaching, Ed stands out as one of the best players that I was ever around. I have been in touch with him through his illness and he was a fighter to the end. He never lost his positive attitude. Ed will be missed by all that knew him.”

Simonini is survived by his wife, Karen, and their children, Anna and Nick, and grandson, Storm. Along with Ed’s sister and three brothers.

Simonini earned his degree from Johns Hopkins as well as earning a master’s degree in civil engineering. After his NFL career, he worked for the Hilti Company and was a field engineer in Dallas before becoming sales manager of the Southwest Region of the United States. He then headed operations in Latin America for the company.

The family will announce a celebration of Ed’s life to be held in Dallas soon. In lieu of flowers any donations could be made in Ed’s honor to the American Cancer Society.