No. 14 Texas A&M Soccer Gives Kentucky no Quarter in 6-1 Victory 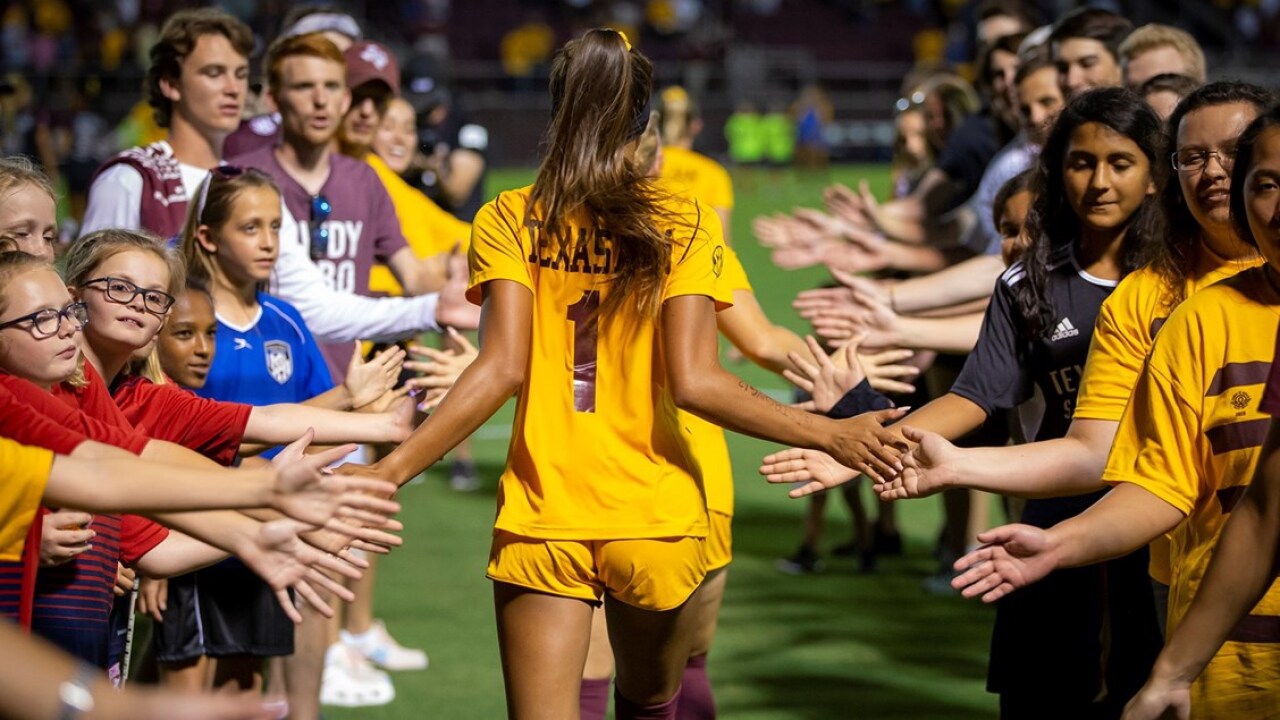 COLLEGE STATION, TX — The No. 14 Texas A&M Aggies came out kicking and screaming Thursday evening against the Kentucky Wildcats, scoring a season-high six goals in a 6-1 victory at Ellis Field.

The Maroon & White scored two goals within the first 25 minutes of action for the fifth time on the season. Each occasion resulted in Texas A&M racking up four or more goals in the match. Five different Aggies notched a goal on the night.

Jimena Lopez registered a career-high four assists on the night and extended her team-leading season totals for assists (11) and points (23).

Ally Watt scored the icebreaker for the third time on the season and 12th time in the last two years. Watt finished the match with 40 career goals, the seventh Aggie to reach the plateau.

Texas A&M and improved to 8-1-2 on the season and extended their series advantage over Kentucky to 7-0-1.

GOAL SUMMARY
6’ – Jimena Lopez sent a high flier just inside the midfield marker to Ally Watt. From eight yards, Watt sent a shot to the right side passed the diving goalie. A&M 1, UK 0.

23’ – Along the left side, Lopez dished the ball to Ásdís Halldórsdótir. Halldórsdótir sent a missile from 28 yards out through Wildcat traffic, through the right side of the goal. A&M 2, UK 0.

49’ – Lopez passed it to Watt at the center from 25 yards out. Watt found Macie Kolb racing down the right side, resulting in Kolb sending the ball just out of reach off the left side post and in from 10 yards out. A&M 3, UK 0.

61’ – Just outside the left corner of the penalty box, Lopez sent the dime to Watt at the top of the six-yard box. Watt flicked the ball through traffic for the goal. A&M 4, UK 0.

67’ – Grace Piper tipped the corner kick from Katie Smith, with a defender all over her, from 10 yards out to Tera Ziemer who finished the play. A&M 5, UK 0.

74’ – Caroline Trout booted an airborne ball that resulted in a tangle of Wildcats and Aggies. Hannah Richardson scored a cosmetic goal with A&M netminder Shantel Hutton caught in the traffic. A&M 5, UK 1.

77’ – Ali Russell sent a laser cross, deflected by the goalie. The carom led to an open window for Abby Grace Cooper to launch it to the back of the net from five yards out. A&M 6, UK 1.

UP NEXT
The Aggies roll into the Baton Rouge on Sunday riding a wave of 18 goals in the last four matches. The Maroon & White face LSU in a 1 p.m.

TEXAS A&M QUOTES
Head Coach G Guerrieri
On the team’s performance…
“I thought it was a good, solid performance across the board. We’re disappointed that we gave up the goal, but if you’re going to give one up, that’s the time to do it. When you have six on your side. That’s something we can learn from for sure. For a young goalkeeper, it’s a good learning experience. I thought our attack was dynamite and I mean, scoring from all different directions. Jimena Lopez with four assists on the night was awesome. It’s great to see both Ásdís Halldórsdótir and Ally Watt getting on the scoresheet. As well as when we make a substitution, getting Abby Grace Cooper coming in and scoring for now the second game in a row for her.”

On what stood out tonight versus the past couple of games…
“I thought that our midfield was really clicking. When you’ve have Addie McCain, Taylor Ziemer, Cienna Arrieta, Grace Piper or Tera Ziemer coming in, it kind of keeps clicking all the way through. Those five are interchangeable, and we can put them in a variety of situations. They’ve gotten better and better. When Addie McCain is playing well, Texas A&M is playing well. It’s kind of an incredible theme.”

Junior Defender Jimena Lopez
On the team’s versatility in their attack game…
“It’s so important. I think that the team is very complete, and we can attack in so many different ways. We have a very deep team. So, everyone that steps on brings a different skill, and everyone who steps up does their job. It’s amazing!”

Senior forward Ally Watt
On the confidence boost starting out in SEC play…
“The confidence boost just makes us realize that we are having fun again. I think that’s what holds the power for this team to win and make those goals. Having confidence is allowing us to relax, enjoy ourselves and play with each other.”