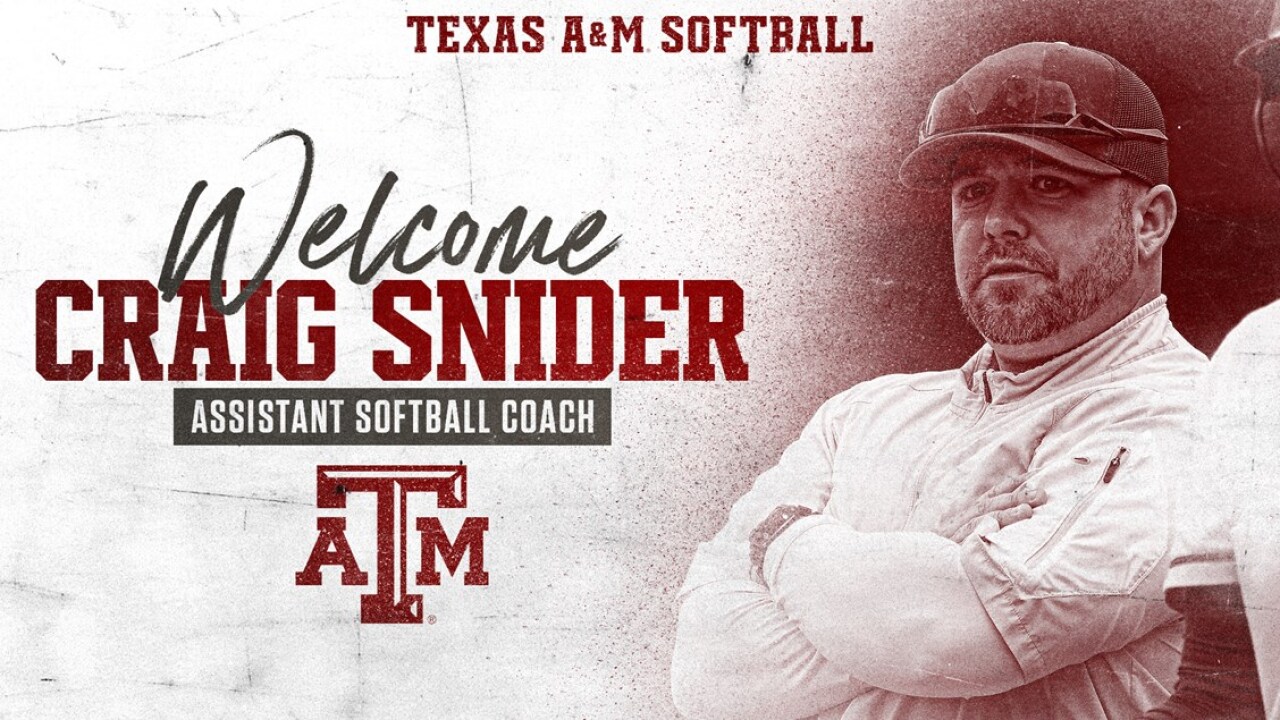 “Craig Snider will be a great addition to our staff,” Evans said. “He understands how to develop hitters and what it takes to compete at the highest level. He is great at building relationships with players and is a top-notch recruiter, having established great ties within the softball community. Craig is a great fit for our program and I look forward to him, Lauren, Riley and Henry joining our Aggie Family.”

“First, I would like to thank Coach (Lonni) Alameda and Coach (Travis) Wilson for a wonderful journey in Tallahassee,” Snider stated. “I’m forever indebted to the coaches, players, administration and fans for treating my family so graciously for eight years. I was honored to help continue the greatness that is Florida State Softball.

“To my new Aggie Family, I’m extremely excited! I’m honored and humbled to work for another storied program and elite head coach. Throughout my career, I have always admired and respected Coach Evans and the Aggie Softball program. I have had the honor to work for and meet so many great alumni who have helped shape the culture to win three national championships and make 12 Women’s College World Series appearances. Thank you to Coach Evans and the administration for the opportunity to carry on the Aggie tradition. Thanks and Gig ‘Em!”

In 2018, Snider, along with head coach Lonni Alameda and assistant coach Travis Wilson were named the National Fastpitch Coaches Association’s National Coaching Staff of the Year after leading Florida State to the program’s first national championship. Snider’s record-setting offense was led by NFCA All-American Jessie Warren, who topped the team with a .404 batting average, 21 home runs and 70 RBI. During their run at the Women’s College World Series, all nine spots in the batting order had at least one extra-base hit.

Florida State matched its conference record with six All-ACC First Team members in 2017, as the Seminoles finished the season with a perfect 24-0 record in ACC play and became just the third school in a Power 5 conference to finish the conference slate unbeaten.

Warren set the Florida State career home runs record in 2017, passing Maddie O’Brien’s mark of 55 in just her third season and earned the second NFCA All-American honor of her career. The Seminoles earned their first-ever No. 1 ranking in the NFCA poll and ended the year with a 55-8-1 record, marking the third time in the last four years that Florida State has reached the 50-win plateau.

Behind a pair of All-American hitters, Alex Powers and Warren, the Seminoles finished 2016 in the top 10 nationally in on-base percentage, scoring, stolen bases and winning percentage. Florida State posted a 21-2 ledger in the ACC and ended the year in Oklahoma City with a 55-10 record.

In 2015, the Seminoles were among the top three in the conference in eight offensive categories and led the ACC with 18 triples. The Seminoles were carried offensively by a pair of freshmen, Warren and Morgan Klaevemann. Warren finished with 19 home runs and 57 RBI as she earned ACC Freshman of the Year honors, while Klaevemann recorded a 26-game hitting streak – second-longest in Florida State history and No. 24 all-time in NCAA history – and led the team with a .393 batting average.

Snider and the offense were an enormous part of the 2014 resurgence of Florida State Softball onto the national scene. The Seminoles posted a 55-9 record and won the school’s 12th ACC Championship and advanced to the Women’s College World Series for the first time since 2004.

Arriving in the summer of 2011, Snider helped foster a winning attitude and developed tremendous camaraderie with student-athletes and recruits immediately. He worked actively to improve the individual performances of several student-athletes in the 2012 season, helping players such as Briana Hamilton, Tiffani Brown, Kirstin Austin and others record banner years. Hamilton and Brown earned selections to the All-ACC First Team for the first time in their careers, while Austin’s noticeable improvement at the plate gave the Seminoles an enormous spark throughout the year.

“I want to wish Craig and Lauren the best with their move to Texas A&M,” Alameda said. “The values that are instilled in Craig on and off the field are family first, and what a great opportunity this is for the Snider family to be closer to home. WE will miss them dearly yet we are so appreciative of all they have given FSU Softball. The memories made, the fun times shared and the success on the field are all a part of our journey together. I wish them the best of luck with their next chapter.”

Prior to his time in Tallahassee, Snider served as an assistant coach at Stephen F. Austin. He took over as hitting coach in 2007 following a season in which the Ladyjacks finished with a .229 batting average. Over the next three seasons, SFA batted .274 (2008), .275 (2009) and .278 (2010). He also led the team to sharp spikes in home runs, on-base percentage and slugging percentage, as SFA recorded 43 round-trippers in Snider’s first season after hitting just 16 the season before.

At SFA, Snider took on several roles as he devised hitting and defensive workouts during the fall, directed all aspects of camps, developed team-building exercises, served as a fundraising arm, handled much of the recruiting and recruiting databases and oversaw his student-athletes’ academic progress.

Snider previously assisted in producing three All-Americans at Oklahoma from 2005-06, and played a large role in creating scouting reports as a graduate assistant coach for the Sooners. At his alma mater of Centenary, he helped lead the school to two Mid-Con Tournament championships while providing analysis for recruiting, hitting, fielding and putting together chart systems. His versatility also included field maintenance and even putting together the team’s highlight videos in 2004 and 2005.

At Lindsey Wilson College from 2001-03, Snider guided the team to batting averages above .300 every season. He was heavily involved in the recruiting process as an assistant coach and oversaw all summer camps.

Snider and his wife, Lauren, who is a native of Bellville, Texas, have a daughter, Riley, and a son, Henry.