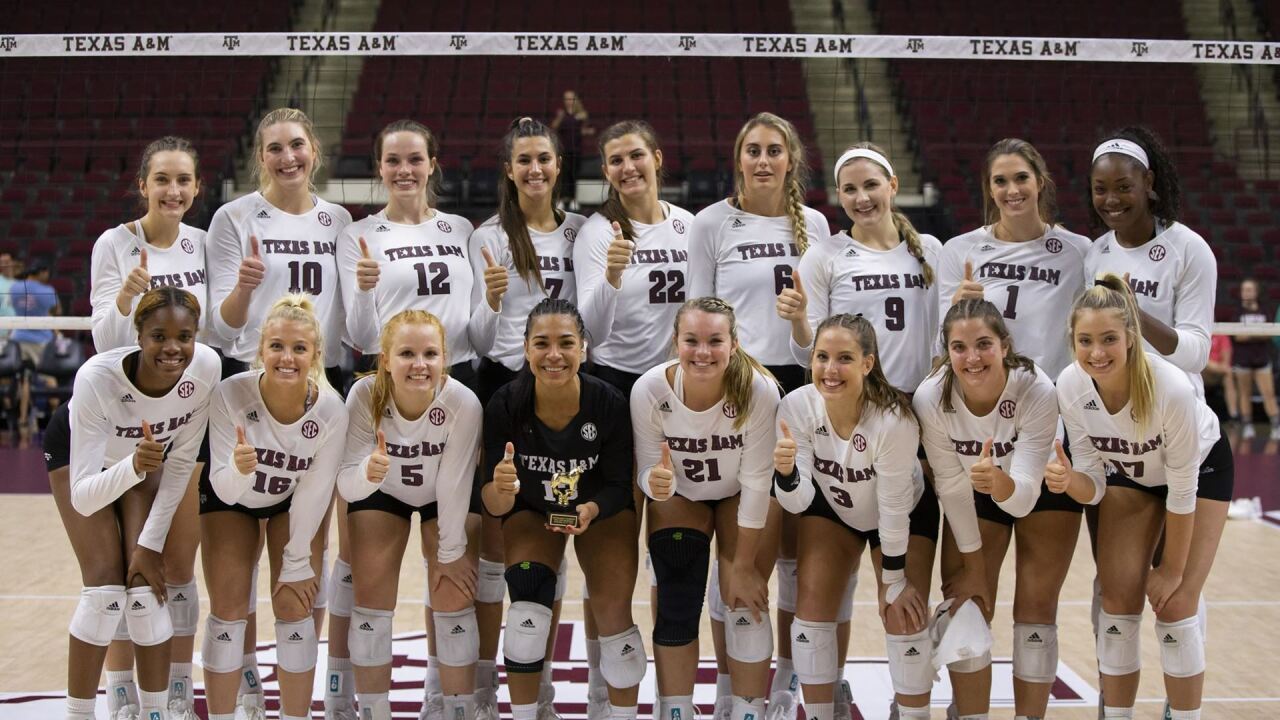 COLLEGE STATION, TEXAS — Texas A&M won its own tournament with a 3-1 (21-25, 25-15, 25-17, 25-22) victory over UTRGV on Friday night at Reed Arena. A&M won all three matches on its home court with wins over Texas State on Thursday and a 3-0 win over Northwestern State this morning and were awarded the tournament trophy. The Aggies improve to 7-1 overall, while UTRGV falls to 5-5.

Four Aggies finished in double figures with Makena Patterson tying her season-high 12 kills and finishing with a .391 hitting percentage and seven blocks. Freshman Lauren Davis was one kill shy of tying her career-high with 11 kills. Hans and Mallory Talbert each had 10 kills, while Talbert posted a .421 mark.

Set One
There were nine ties and three lead changes that decided the first frame. With Karly Basham at the line, A&M was able to go ahead 14-10. The Vaqueros did not let up, climbing back into the set to knot it at 15. From there, it was a see-saw battle. Mallory Talbert and Camille Conner came up big for the Aggies with a block, tying the set at 20. A 4-0 run helped UTRGV reach set point, eventually taking the 25-21 win. Makena Patterson led the Aggies with three kills.

Set Two
The set was knotted at seven before A&M went on a 3-0 run to take a 10-7 lead. Patterson was unstoppable, recording five kills in the frame, as the Aggies built on their lead to go ahead 20-11, forcing UTRGV to call timeout. A&M held the Vaqueros to 15 points, as the Aggies closed out the set 25-15. Lauren Davis and Talbert tallied three kills in addition to Patterson’s five.

Set Three
It was another close battle with 12 ties and five lead changes in a back and forth fight. A kill by Talbert and back-to-back kills by Conner gave the momentum to the Aggies, forcing UTRGV to call timeout, as the A&M took the lead, 15-14. Hans helped A&M go ahead with a service ace and Lauren Davis was dominant to close the set. The freshman had a kill, a block assist with Patterson and secured the set with a kill to win 25-17. Hans led the Aggies with four kills, while Conner and Lauren Davis each had seven.

Set Four
A 9-4 lead lifted the Aggies in the beginning of the set, but the Vaqueros came battling back to knot the set at 15. Conner was clutch, putting down back-to-back kills to put A&M back on top. A kill by Patterson and an ace by Taylor Voss helped the Aggies go ahead 22-19. The Vaqueros were able to pull within one, but the Aggies had a block by Treyaunna Rush and Talbert to clinch the match with a 25-22 set victory.

Post-Match Quotes
Texas A&M Head Coach Bird Kuhn
Opening Statement
“That was a solid win for us. That was a great team and they will go on to do great things this year. For our team to respond the way they did after set one and also the delay in the third set, I was proud of that. The execution and the focus they claimed after set one showed me growth. I know we have areas where we need to grow more and continue to mature with our consistency, but that was big for us as a team.”

On the team’s performance tonight…
“They can execute when they focus. When we demand or ask them things, we are holding the whole team to a standard. Tonight we focused on our middles and it was up to their mental game. We placed the balance on them and to see it work effectively tonight against a good team was improvement. I can see the execution is there. We just have to keep moving forward.”

Junior middle blocker Makena Patterson
On Camila Gomez solidifying the defense
“Camila has been a huge rock for our team. She’s always back there super loud and super talkative. She always comes up to the net and is really encouraging. It feels good to be up at the net and know I have her behind me; I really have a lot of trust in her.”

On the team’s approach moving forward
“Keeping the same mind set, but also learning every week. We are so grateful that we came out with three wins, but we have to step up our game against these next two opponents. This week is definitely our biggest week yet.”