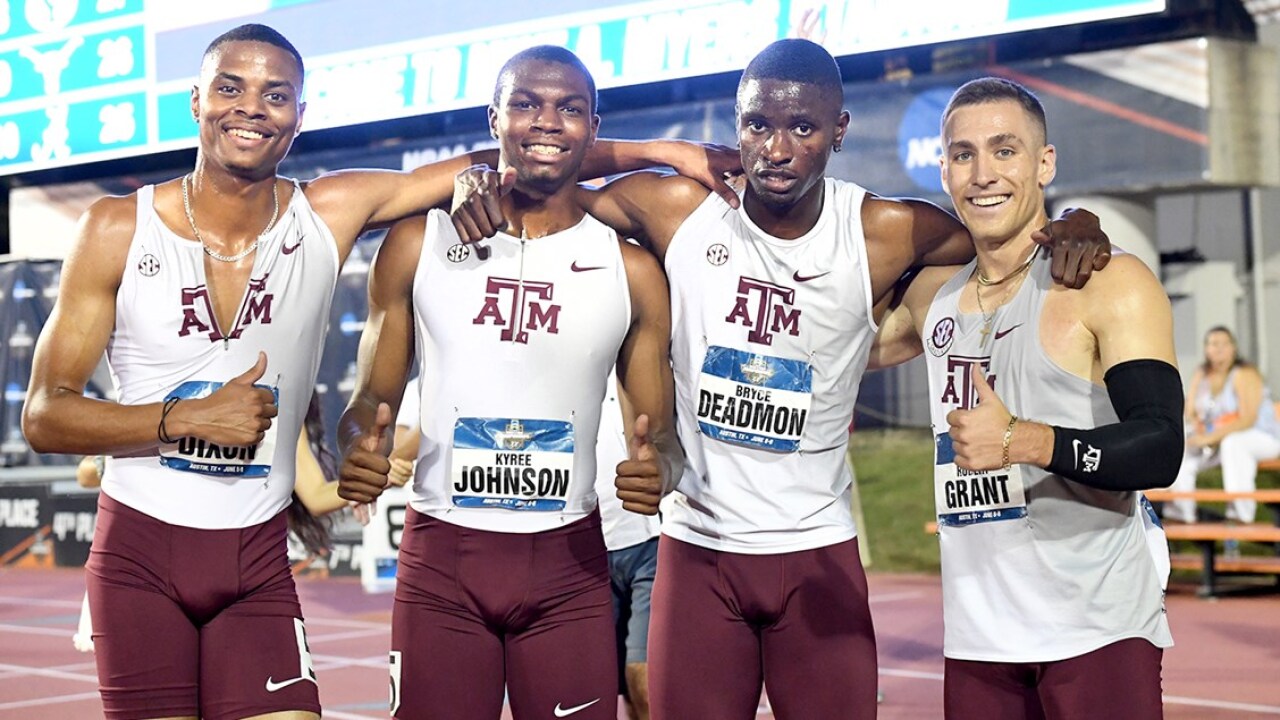 AUSTIN, TX — Texas A&M closed out the men's portion of the NCAA Championships with a school record victory in the 4x400 relay, posting the second fastest time in collegiate history with a time of 2 minutes, 59.05 seconds. The Aggies totaled 29 team points to place sixth in the meet.

Also scoring for Texas A&M were Devin Dixon and Carlton Orange in the 800m along with Bryce Deadmon in the 400m.

Meanwhile, Aggie sophomore Tyra Gittens leads the heptathlon through the first day with a career best tally of 3,872 points and leads the field by 161 points.

"Bryce had his fastest lead-off leg ever on the 4x400, and the rest of the guys ran fast to get a 2:59.05, second fastest time in history," noted Texas A&M head coach Pat Henry. "I'm pretty pleased with that. We lose Bobby Grant of that group, but nobody else.

"Devin knows how to run the anchor leg, and in the last 110m you're not going to catch him. The guy is phenomenal and he knows how to win. We did everything we could do today, but I would like to have Bobby's points in the hurdles."

Dixon claimed the silver medal in the 800m final with a 1:44.84, leaving him trailing only Bryce Hoppel of Kansas (1:44.41 career best). Aggie teammate Carlton Orange produced his second career best time at this meet to finish fourth with a 1:46.40, moving him to No. 4 performer on the Aggie all-time list.

Dixon, who finished seventh as a freshman and fifth as a sophomore, produced the No. 3 performance on the A&M all-time list behind Donavan Brazier's 1:43.55 and Dixon's career best of 1:44.75.

This marks the first time for a pair of Aggies to score in the NCAA 800m as Dixon and Orange combined for 13 points.

Deadmon placed sixth in the 400m final with a career best of 45.18, which moves him to No. 10 on the A&M all-time list. Grant initially placed fourth in the 400m hurdles, but was disqualified for trail leg on the seventh hurdle.