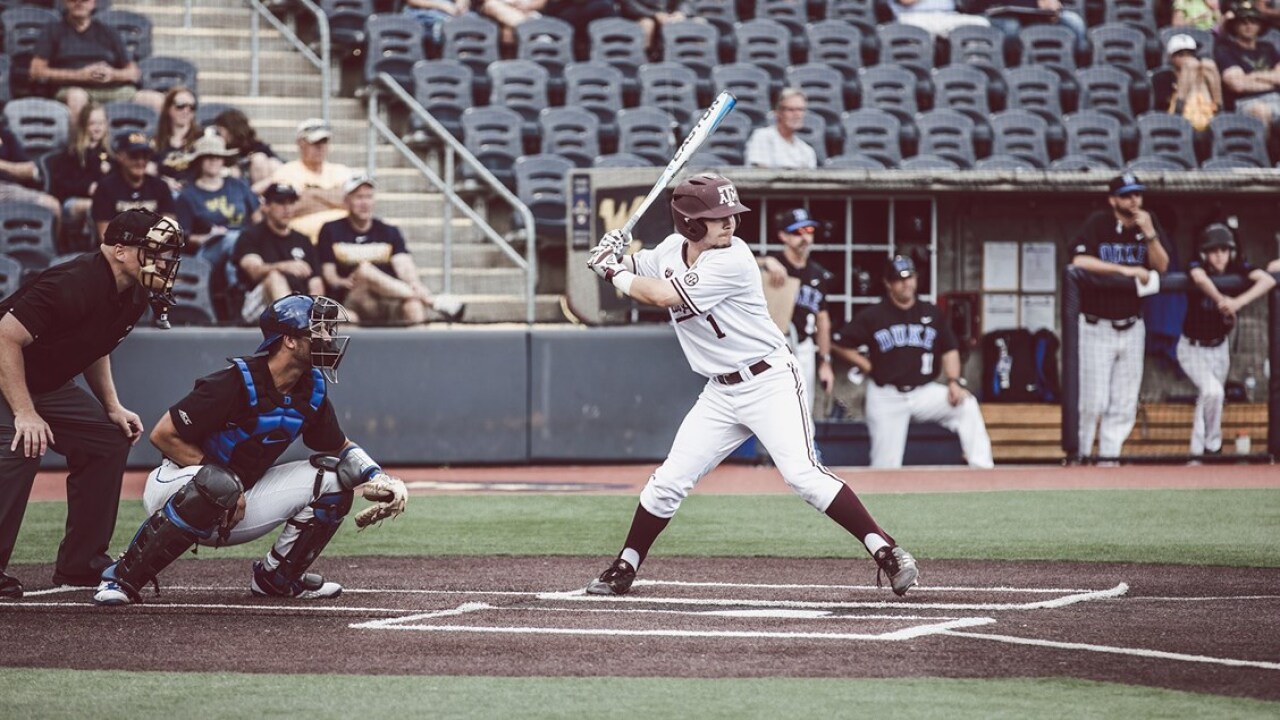 MORGANTOWN, WV — A ninth-inning rally came up short for No. 19 Texas A&M as the Aggies lost an 8-5 decision to the Duke Blue Devils in Friday afternoon’s Morgantown Regional opener at Monongalia County Ballpark.

Trailing 8-1 in their last raps, the Aggies brought the tying run to the plate before the frame ended with a grounder to short by Ty Condel. Texas A&M’s ninth inning featured RBI singles by Zach DeLoach and Ty Coleman and Logan Foster and DeLoach scored on a wild pitch and passed ball, respectively, to cut the lead to 8-5 with two outs remaining.

John Doxakis (7-4) was saddled with the loss. He yielded four runs on six hits while striking out nine in 7.0 innings. All four of the runs and four of the hits came in an ill-fated fourth inning. The bullpen relinquished four runs in the eighth before Chandler Jozwiak and Jake Nelson finished the game off with 1.2 blank frames.

Hunter Coleman paced the Aggie offense, going 1-for-2 with one double, one hit-by-pitch, one walk and two runs.

The Aggies play an elimination game Saturday at 1 p.m. against the loser of Friday evening’s game between Fordham and West Virginia.

SCORING SUMMARY
T4 | With one out, Michael Rothenberg singled to leftfield and Kyle Gallagher singled to center. Erikson Nichols hit a three-run home run over the leftfield fence. Chris Crabtree kept the rally going with a double to centerfield, moved to third on a wild pitch and came home to score on a grounder to second by R.J. Schreck. DU 4, A&M 0.

B5 | Hunter Coleman hit a leadoff double to leftfield, moved to third on a fly ball by Ty Coleman and scored on a sacrifice fly by Braden Shewmake. DU 4, A&M 1.

T8 | Aggie reliever Bryce Miller received a rude greeting with Rothenberg doubling to centerfield and Gallagher singling up the middle to put runners on the corners. Rothenberg scored on a wild pitch and Nichols singled through the right side to give Duke runners at first and third again. Joseph Menefee spelled Miler on the mound and gave up a three-run, pinch-hit home run to Rudy Maxwell. DU 8, A&M 1.

B9 | With one out, Jonathan DUcoff was hit by a pitch and Logan Foster drew a walk. DeLoach threaded a single through the right side to plate Ducoff. Hunter Coleman was hit by a pitch to fill the bags with Ags. Foster came home on a wild pitch and DeLoach scored on a passed ball. Ty Coleman bounced a single up the middle to drive in his brother. The second out of the inning came on a fielder’s choice grounder by Shewmake, retiring Ty Coleman at second. After Bryce Blaum was hit by a pitch, Ty Condel came to bat as a pinch-hitter and grounded out to short to end the game. DU 8, A&M 5.