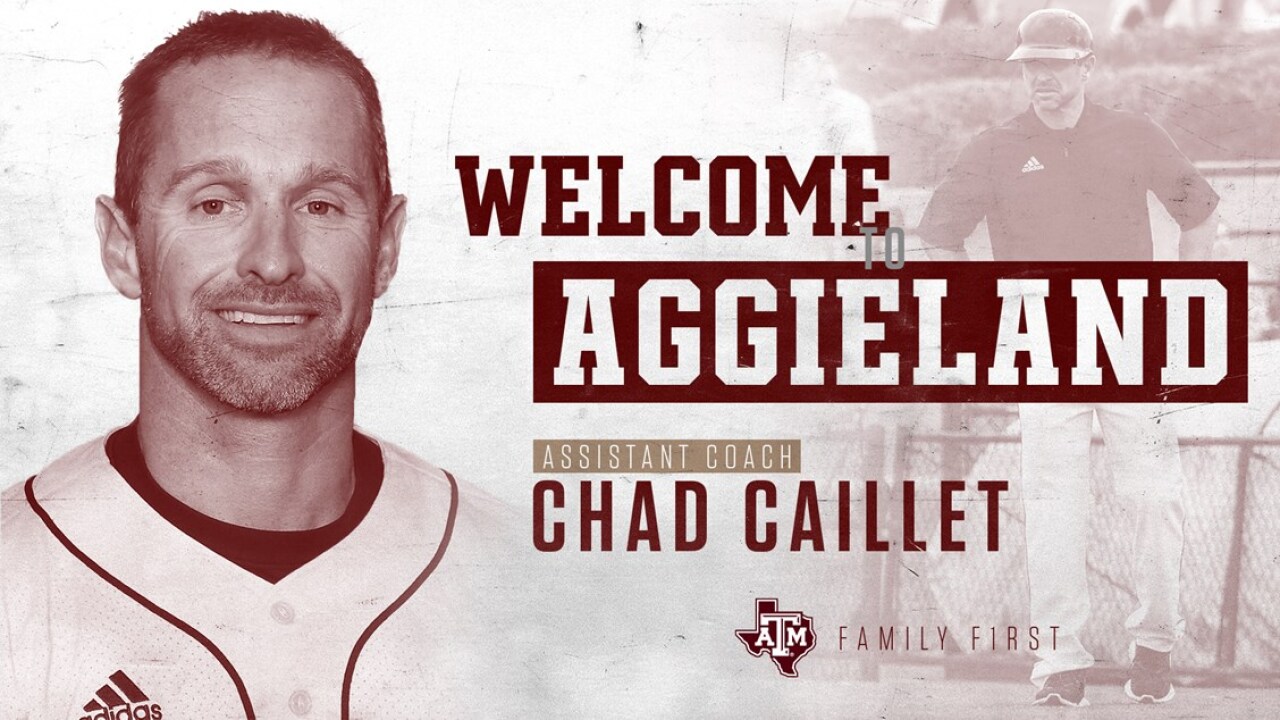 Caillet's primary functions will include coordinating the offensive game, mentoring the infielders and serving as third base coach. He fills the position that became available when Will Bolt accepted the job as head coach at the University of Nebraska.

“We couldn’t be more excited with the addition of Chad, his wife Jessica and his two children to the Aggie family,” Childress said. “He fits right in with what we’re trying to do and I know we’re all thankful he chose to come be a part of Texas A&M Baseball. I know he is going to make an immediate impact.”

The Aggies hired Caillet fresh off his 12th season on the staff at Southern Miss, including his third campaign as associate head coach. He served as the Golden Eagles’ recruiting coordinator as well as working with the team’s offense and infield defense.

“This is an unbelievable opportunity and a dream come true for my family and me to be a part of something so special,” Caillet said. “This is a chance for me to coach at a premier program and work under one of the finest head coaches in college baseball. We are truly blessed to be welcomed into the Aggie Family.”

During Caillet’s dozen seasons in Hattiesburg, the Golden Eagles made one College World Series appearance (2009), finished in the Top 25 on three occasions and made eight NCAA Regional appearances.

“Chad has an incredible reputation across the country in the areas of offense, infield defense and recruiting,” Childress said. “Working under Coach (Scott) Berry for the last 12 years, Southern Miss have been a constant in the postseason and they have been at the top of Conference USA in almost every offensive category.”

The last four years, the Golden Eagles led Conference USA in most offensive categories. Southern Miss was one of five NCAA Division I programs to register 40 win seasons in each of the last four seasons. The 2017 squad racked up 50 wins for the only time in school history as Caillet earned Conference USA Assistant Coach of the Year. The team combined for a school-record 94 wins in 2017 and 2018.

With Caillet in charge of the offense, Southern Miss re-wrote the school record books, setting single-season team marks for runs, RBI, batting average and on-base percentage, among others.

He also made a mark on the Golden Eagles’ defense. The team led the nation in double plays for three consecutive seasons from 2009-11. The team also paced the country in double plays per game in 2010, ’11 and ’13.

Caillet is nationally recognized for his recruiting efforts. In November 2016, D1Baseball.com named him Conference USA’s top recruiting coordinator. In his first year as recruiting coordinator in 2009, he landed the No. 23 class in the nation. He followed it up with a No. 21 class in 2010. In 2012, he helped Southern Miss pull in a class ranked third by Baseball America and 13th by Collegiate Baseball.

Wallner became Southern Miss’s highest-ever selection in the MLB Draft, picked by the Minnesota Twins with the No. 39 overall pick. The Golden Eagles have had nine players selected in the first 10 rounds during his 12 seasons. In addition to Wallner in the first round, Sandlin was picked in the second round (2018) and B.A. Hellmuth was selected in the third round (2011).

Three players Caillet recruited earned the Boo Ferris Award, given annually to the top collegiate player in the state of Mississippi, including Tyler Koelling (2011), McMahon (2015) and Sandlin (2018).

In his first NCAA Division I stint, Caillet served as an assistant coach at Southeastern Louisiana University for the 2006-07 seasons. SLU's 2006 and 2007 signing classes ranked in the Top 50 nationally. The 2006 Lions set a school record for Southland Conference victories. Caillet briefly served on the coaching staff at McNeese State University in July-August 2007 before taking the assistant coach position at Southern Miss.

Caillet served one year as head coach at Meridian (Miss.) Community College in 2005. During his lone season at the helm, the Eagles sported a 44-14 record, including a spotless home mark. Meridian won the Mississippi Association of Community and Junior Colleges (MACJC) State and Central Division titles and advanced to regional play. That season the Eagles earned a top 10 national junior college ranking and Caillet was tabbed the MACJC Coach of the Year.

Prior to his season as the skipper, Caillet spent three seasons as an assistant coach at MCC from 2002-04. He helped the Eagles win two Region 23 championships and make consecutive Junior College World Series appearances in 2003 and 20`04. They finished ranked in the top 10 nationally both seasons.

Caillet also had one-year coaching stops at Mississippi College (2001), Millsaps College (2000) and Copiah-Lincoln Community College (1999). He spent two summers in the Cotton States League, including one year as manager for the Meridian Marauders, which won its first league title.

Caillet is married to the former Jessica Compretta and they have a daughter, Carsyn, and a son, Coby.