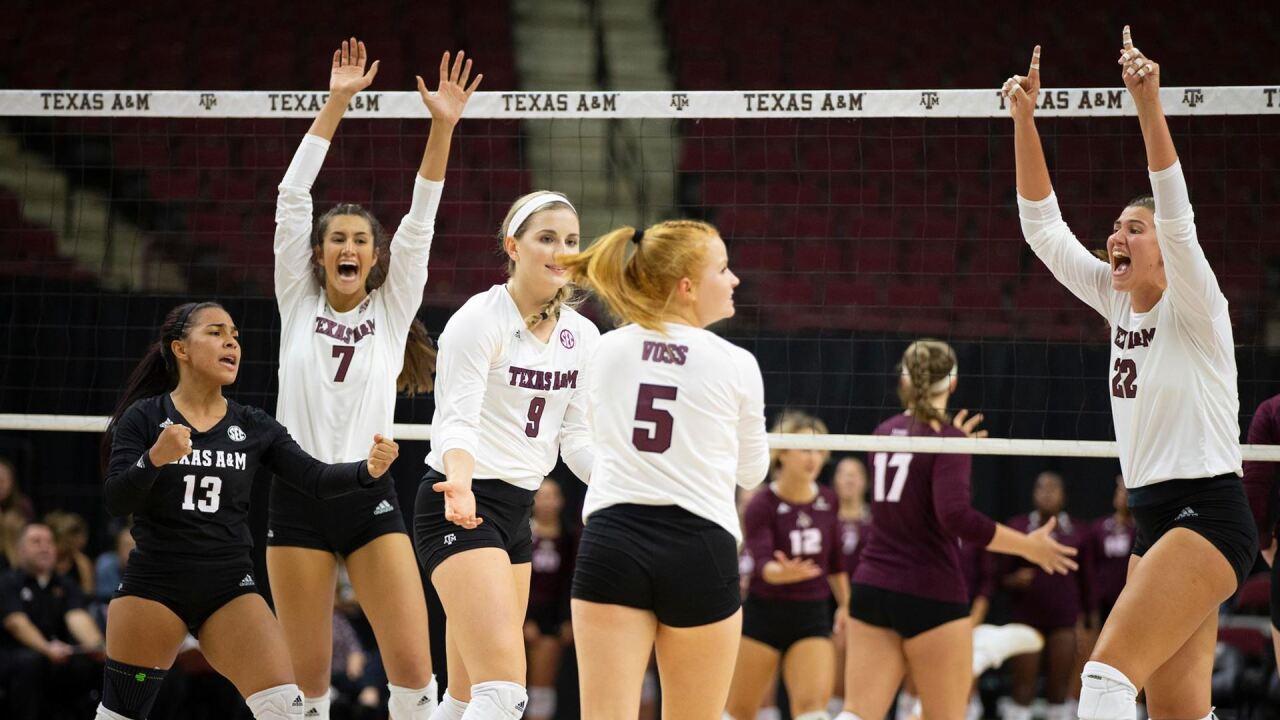 Senior outside hitter Hollann Hans had the game-high 12 kills, while freshman Lauren Davis also finished in double figures with 11.

Set One
The Aggies dominated the first set, coming out strong to go ahead 8-1. There was nothing that was going to stop A&M, as they took a 20-9 lead at the 20-point mark. The Aggies held Texas State to just 11 points in the first set. Lauren Davis led the set with four kills, while Makena Patterson and Hollann Hans each had three in the Aggies’ 25-11 set win.

Set Three
There were 11 ties and five lead changes in a very close third set. Camille Conner’s service ace gave the Aggies a three-point advantage and sparked a 4-0 run to go ahead 22-17. Texas State would come within three, but Hans’ eighth kill of the match secured the 25-21 win for the Aggies. Hans, Conner and Patterson continued to lead the team with three kills each in the third set.

Set Four
Back-to-back blocks by the duo of Treyauanna Rush and Makena Patterson set the tone for the Aggies in the fourth set. A kill by Lauren Davis put the Aggies ahead 9-5, forcing Texas State to call timeout. Hans would put A&M ahead by five with an ace and the Aggies would build on its lead. A trio of kills by Davis, Patterson and Hans ended the set 25-20 for Texas A&M to clinch the match.

Opening statement from Coach Bird Kuhn
“I think our defense executed and we capitalized on that,” said Kuhn. “We thrive on the execution. Offensively, we struggled in the second set, but overall I’m proud of them. Like they said, Texas State is a very good team. For us to come out and start the first set the way we did, that set the tone and we just need to keep our foot on the pedal.”

What was the difference between the first and second set
“We started with an error, a hitting error and then the passing was off,” Kuhn said. “Attackers have to stay in attack mode even when the passing is off. It just kind of snowballed. We got it going again, but you have to have that belief and trust the system. It was the rhythm, and we had to find it faster.”

Up Next
The Aggies have a double-header on Friday, Sept. 12 with the first match beginning at 10 a.m. against Northwestern State. The Aggies close out the Texas A&M Invitational with UTRGV at 7:30 p.m. and both games will be played in Reed Arena.

Visit 12thMan.com [12thman.com] for more information on Texas A&M volleyball. Fans can keep up to date with the A&M volleyball team on Facebook and on Twitter by following @AggieVolleyball.