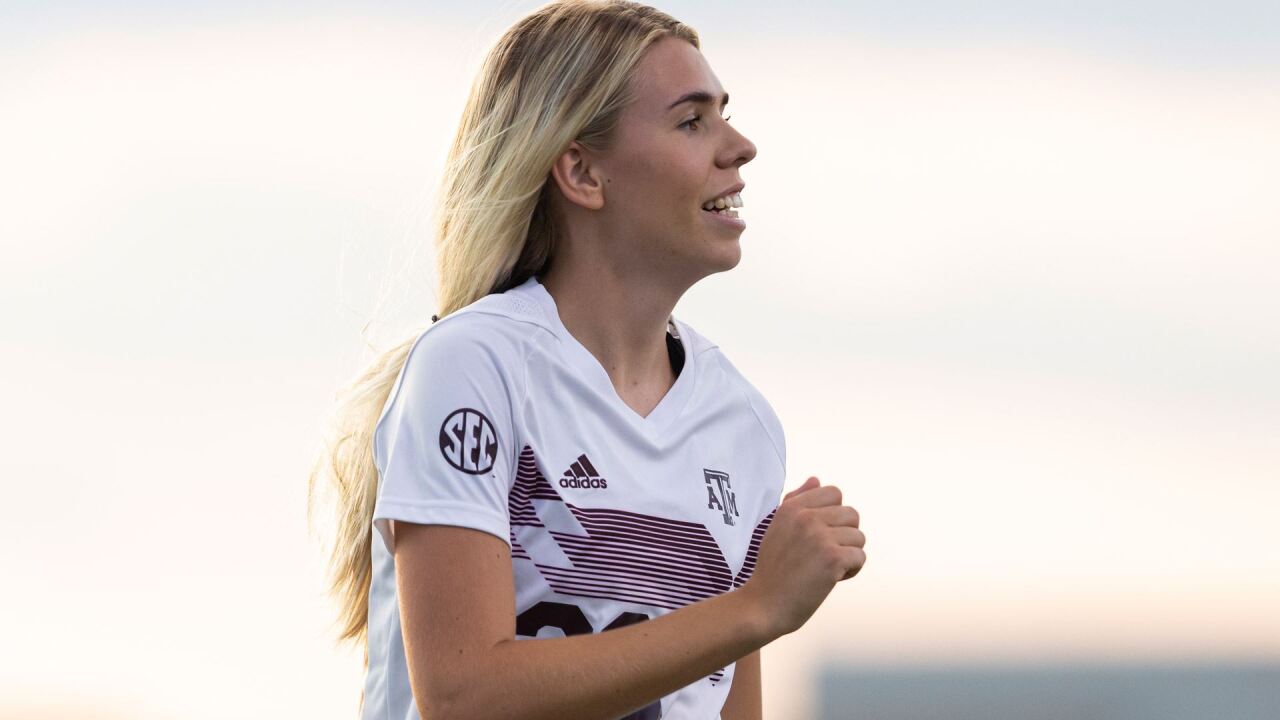 COLLEGE STATION, TEXAS — The No. 15 Texas A&M Aggies took care of business in their final non-conference match with a 5-0 win against the UTRGV Vaqueros Sunday night at Ellis Field.

Ásdís Halldórsdóttir scored two goals, recording the first multi-goal match of her career. Jimena Lopez also added her sixth goal and seventh assist on the season for a team-high 19 points. Addie McCain and Abby Grace Cooper each found the back of the net.

Ally Watt was responsible for two of the seven total assists on the night. Callyn Walton registered her first career assist. The Maroon & White also got assists from Macie Kolb, Grace Piper and Katie Smith.

Texas A&M continues their Lone Star State dominance, extending their unbeaten streak against in-state rivals to 36 matches at 31-0-5 since 1998.

The Maroon & White supplied the pressure, recording a season-high 30 shots and 17 shots-on-goal. The Aggies’ defense only yielded six shots and a single shot on goal.

Shantel Hutton and Kenna Caldwell combined on the 90 minutes in goal as the Aggies recorded their eighth shutout of the season. Caldwell made her first appearance as an Aggie, registering 39 scoreless minutes and a save.

GOAL SUMMARY
4’ – Ally Watt stole the ball from a defender at the top of the penalty box. She sent a diagonal ball to Ásdís Halldórsdótir who sent it home from the left corner of the six-yard box. A&M 1, UTRGV 0.

19’ – Jimena Lopez sent a cross from the left side to Addie McCain who maneuvered past a couple to Vaqueros for the finish from six yards out. A&M 2, UTRGV 0.

51’ – Watt dished it to Macie Kolb, who sent the dime to Halldórsdótir while surrounded by defenders. Halldórsdótir booted the goal from eight yards out for the brace. A&M 3, UTRGV 0.

80‘ – Callyn Walton booted a moonshot from midfield to Grace Piper‘s head at 15 yards out. Off the header, Lopez froze the goalie, kicking the ball from five yards out on the left across to the right side of the goal. A&M 4, UTRGV 0.

84‘ – Katie Smith worked the ball down to the end line on the left side and laced a cross through the Vaqueros’ defense. An unmarked Abby Grace Cooper one-touched the ball from two yards out for the goal. A&M 5, UTRGV 0.

UP NEXT
The Aggies stay home at Ellis Field to resume SEC play, hosting the Kentucky Wildcats Thursday at 6:30 p.m.

TEXAS A&M QUOTES
Head Coach G Guerrieri
On the match against UTRGV…
“UTRGV is a team that is going to do very well in their league. They’re very organized, as you said. They probably have 10 different nations represented on their roster, which means that they come from football cultures and are smart players. So it takes a lot to break that down. Their goalkeeper, Kinga Szemik, played unbelievably well. Some of the saves that she made were remarkable saves. With that, I think that we keep getting better and better every game. That’s what I’m most impressed with. We looked better in the second half today than we looked in the second half on Thursday, which was our best half of the season.”

On how they were able to wear down the opposing team…
“You could see our depth, especially in goalkeeper. Kenna Caldwell was able to come in, and we don’t miss a beat back there. We were able to give Karlina Sample the night off, and I thought that Briana Alston did a great job back there. Then, all the substitutions in the midfield, all the substitutions up front and everyone just kind of stepped in. If anything, they actually picked up the pace a little bit, which was really nice to see.”

Junior midfielder Addie McCain
On team’s performance tonight…
“We feel as though up to this point we haven’t been the sharpest at connecting our passes, but we have seen improvement moving forward. Seeing the connections in the game tonight showed that, and we just need to gain the confidence to do that every match. The goal was to build off today and realize we can play this way in our conference.”

On tonight’s game plan…
“We came into this game with the same mentality as always. We knew that they were going to sit in on us a little, since they probably had seen the game against Brown. The goal was to come out here and be us. We were looking to pass the ball through midfield and come out scoring easy goals, which we accomplished tonight.”

Sophomore forward ÁsdÍs Halldórsdótir
On the many assists tallied from Ally Watt…
“I might have to buy her dinner for all of them. She’s been doing a good job setting me up, but I need to work on finishing the rest. It felt good to come out tonight and score two of my own.”

On her performance tonight…
“It felt really good to get some goals tonight. It’s good to see this as a team win, and racking up five goals just proves how strong we are going to be heading into conference play.”