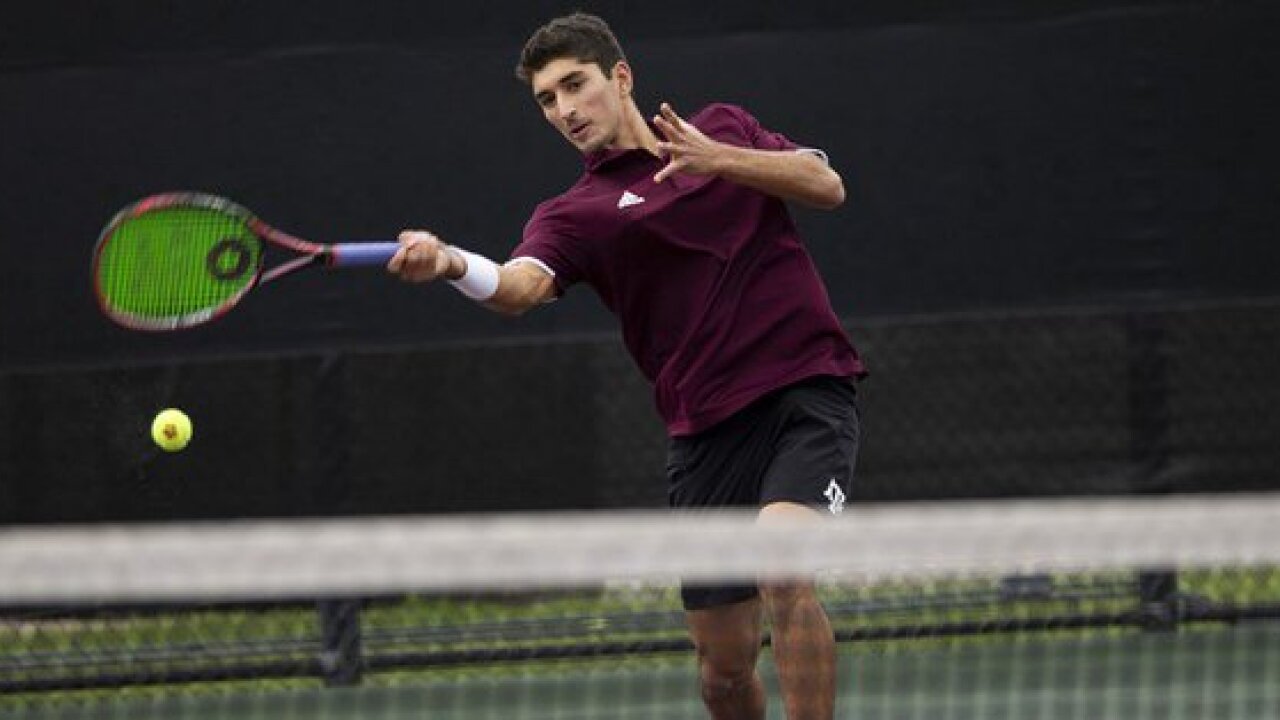 “I thought Hady [Habib] really had to battle hard and showed great poise under pressure at the end of the match today,” Texas A&M men’s tennis head coach Steve Denton said. “That match was played at a very high level. Carlos [Aguilar] jumped on his opponent today and was very stingy, he made very few errors. Both young men played very tough tennis today and looked very motivated to compete, it was a great day for the Aggies.”

No. 58 Habib defeated Moreno De Alboran 3-6, 6-1, 7-6(5) to advance to Tuesday’s second round against No. 46 Alex Brown of Illinois. The win was the highest ranked win of Habib’s career, topping his victory over then-No. 28 Kyle Seelig of Ohio State.

“I made some tactical adjustments in the second set with the help of my coaches that really helped me win the match today,” Habib said. “I tried to play each and every point and never gave up on a rally. I am looking forward to taking on Alex [Brown] tomorrow, I think it will be another physical match.”

No. 31 Aguilar came out on fire against Sigsgaard earning a pair of quick breaks in the first set en route to a 6-3 win in the opening frame. Aguilar clinched his first-career top-10 win with a 6-3 triumph in the second set to advance to face No. 22 Jack Lin of Columbia on Tuesday. Aguilar defeated Lin at the fourth round of the ITA All-American Pre-Qualifying Draw on Oct. 1, 2017, 7-5, 6-3.

“I played really well today against the No. 1 player from Texas,” Aguilar said. “I knew this would be a really tough match and I had to play at a very high level to get the win. I was able to deliver in some very tough conditions, it was really hot today and I was able to keep my composure in the tough moments. I am happy about the win, but am more excited to get back out and play again tomorrow.”

In the doubles draw, scheduled to begin on Tuesday, No. 8 Aguilar and Barnaby Smith are slated to face off against No. 10 Brandon Holt and Riley Smith of Southern Cal.