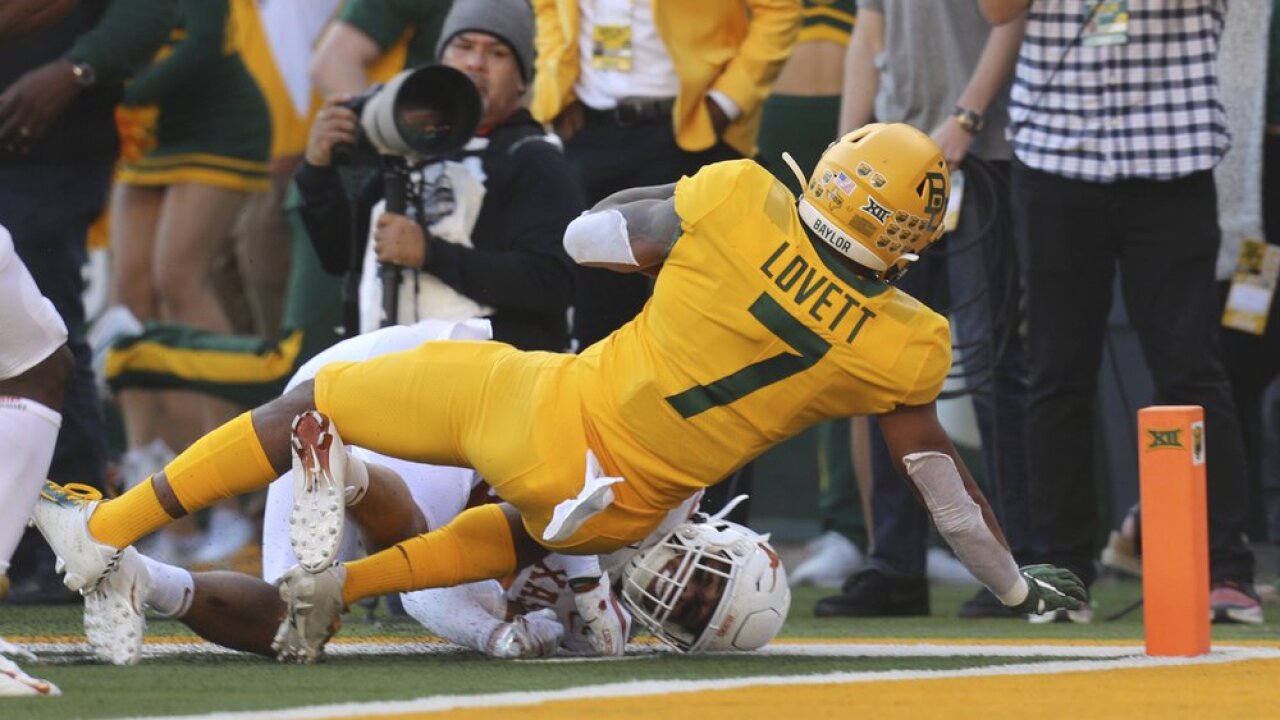 WACO, Texas (AP) — Charlie Brewer accounted for 296 yards and two touchdowns and No. 13 Baylor wrapped up a spot in the Big 12 championship game with a 24-10 victory over Texas on Saturday, a week after the Bears missed a chance to do so with their first loss of the season.

The Bears (10-1, 7-1 Big 12, No. 14 CFP) have their sixth 10-win season, and fifth since 2011. This one comes just two years after the school’s only 11-loss season in coach Matt Rhule’s debut when he took over in the aftermath of a sprawling sexual assault scandal that led to two-time Big 12 champion coach Art Briles getting fired 3 1/2 years ago.

Texas (6-5, 4-4) lost for the third time in four games, ending its long-shot bid to get back to the Big 12 title game for the second year in a row.

Brewer, the junior quarterback from Austin whose dad and grandfather played for Texas, completed 16 of 25 passes for 221 yards with a touchdown, and ran 18 times for 75 yards and another score. But he left the game for good with 11 1/2 minutes remaining after taking a helmet-to-helmet hit when being tackled at the end of a 5-yard run.

On his 1-run touchdown run in the third quarter, Brewer hopped onto the back of offensive lineman Khalil Keith when crossing the goal line. Brewer later threw a 12-yard TD pass to Denzel Mims to make it 21-3.

Mims had seven catches for 125 yards, all when Brewer was still in the game.

Baylor beat the Longhorns for the first time in its campus stadium on the banks of the Brazos River. The Bears had last beaten Texas at home on bitterly cold December night in 2013, in the last game played at Floyd Casey Stadium after 64 seasons, to clinch their first Big 12 title.

John Lovett’s 28-yard TD run on the first play of the second quarter put Baylor ahead to stay. Lovett made a nice cut behind right tackle Blake Bedier, who knocked two defenders to the ground in a move that blocked several others out of the play, and then Lovett bulled over another defender to get into the end zone.

Texas: A year after capping a 10-win season with a Sugar Bowl victory, the Longhorns have already lost five games for the eighth time in 10 years — they hadn’t lost more than three games in any of the 10 seasons before that. Texas had scored at least 21 points in 28 consecutive games since late in the 2017 season.

Baylor: A nice bounce-back for the Bears, a week after a 34-31 home loss to four-time defending Big 12 champion Oklahoma, which trailed by 25 points before the biggest comeback in school history. Baylor overcame a fumble on the second play of this game at the end of a 44-yard pass play.

Texas finishes the regular season at home Friday morning against Texas Tech, then waits to see where it will play in a bowl game.

Baylor plays its regular-season finale at Kansas, a week before the Big 12 title game Dec. 7 in Arlington, Texas.