Tiger Woods makes Masters his 15th and most improbable major 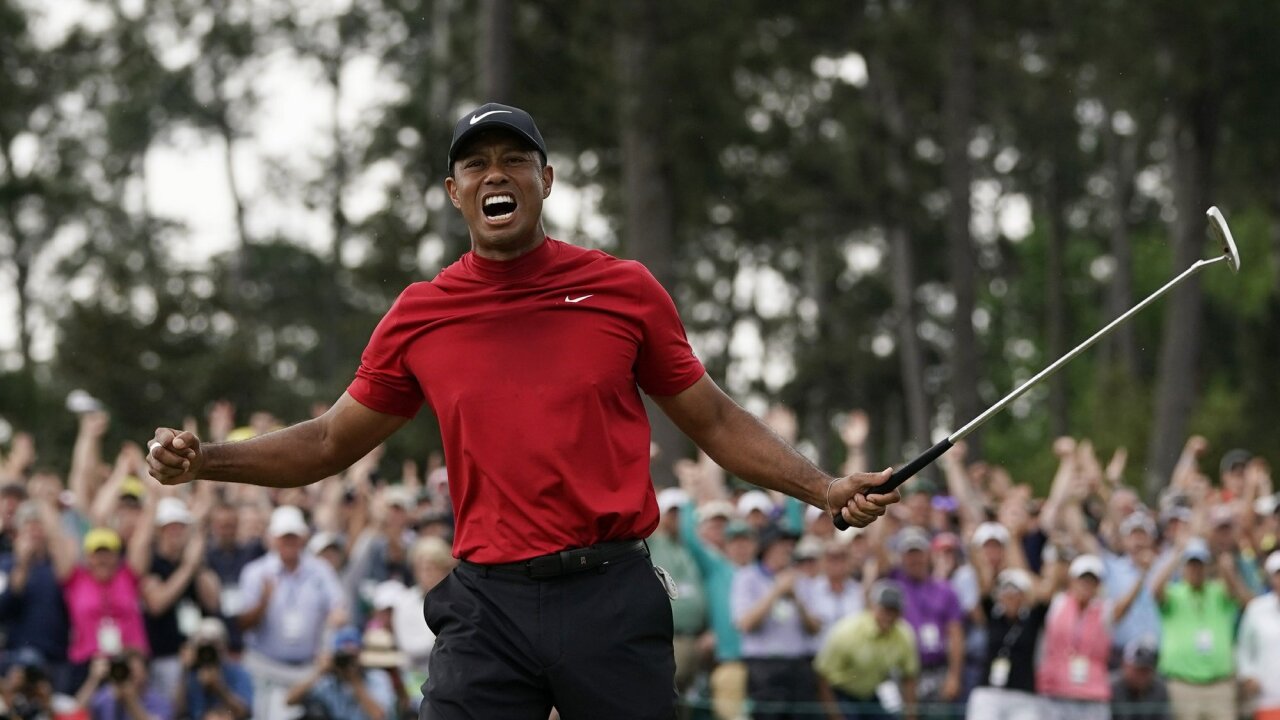 AUGUSTA, GA — Tiger Woods blazing to victory in his Sunday red at the Masters, a scene once so familiar, was never more stunning.

It was only two years ago at Augusta National that Woods needed a nerve block just to hobble upstairs to the Champions Dinner, unsure he would ever play another round of golf. He had a fourth back surgery with hopes of simply playing with his two children, not chasing Jack Nicklaus in history.

And now it’s all pieced back together — his life, his back, even golf.

A fallen hero, a crippled star, Woods is a Masters champion again.

43.8K1:46 PM - Apr 14, 20198,700 people are talking about thisTwitter Ads info and privacyWoods scoops up his son
He won his fifth green jacket, his 15th major, but never with this much raw emotion. The most ferocious fist pump was when he walked off the 18th green, scooped up 10-year-old son Charlie, and embraced his mother and his 11-year-old daughter Sam.

“For them to see what it’s like to have their dad win a major championship, I hope that’s something they will never forget,” Woods said.

Who can ever forget this day?

“It’s hard to really feel bad about how I played because I just witnessed history,” said Xander Schauffele, one of three players who finished second. “It was really cool coming down the stretch, all the historic holes, Tiger making the roars. I feel like I got full Masters experience.”

The comeback goes beyond the two-shot deficit he erased before a delirious audience that watched memories turn into reality.

It had been 14 years since he last won the Masters — no one had ever gone that long between green jackets. He had gone nearly 11 years since his last major, the 2008 U.S. Open at Torrey Pines on a shattered left leg.

3,8132:48 PM - Apr 14, 20191,117 people are talking about thisTwitter Ads info and privacyWoods' final round highlights
Woods never missed a shot that mattered over the final seven holes, taking the lead with a 5-iron to the fat of the green on the par-5 15th for a two-putt birdie, delivering the knockout with an 8-iron that rode down the ridge by the cup and settled 2 feet away for birdie on the par-3 16th.

He tapped in for bogey and a 2-under 70, and the celebration was on.

Woods celebrates“WOOOOOOO!!!” Woods screamed as he headed for the scoring room with chants of “Tiger! Tiger! Tiger!” He had never hugged more people, everyone in his camp who stood by him through a public divorce, an embarrassing mug shot from his DUI arrest when he took a bad mix of painkillers and the four back surgeries, the most recent to fuse his lower spine

“I had serious doubts after what transpired a couple of years ago,” Woods said. “I could barely walk. I couldn’t sit. Couldn’t lay down. I really couldn’t do much of anything. ... To have the opportunity to come back like this, it’s probably one of the biggest wins I’ve ever had for sure because of it.”

President Donald Trump, who has played with Woods at his Florida course, had two tweets of congratulations. Fenway Park posted the news on the scoreboard.

Donald J. Trump✔@realDonaldTrumpLove people who are great under pressure. What a fantastic life comeback for a really great guy!

CC@ChatByCCReplying to @realDonaldTrump and 2 othersCongratulations to President Trump’s friend Tiger Woods on winning The Masters!
106K2:10 PM - Apr 14, 2019Twitter Ads info and privacy27.6K people are talking about thisA comeback for the ages?

It rates among the best because Woods has meant so much to so many in a sport he ruled for so long. Whether he can dominate it again is still to be determined. Woods needed some help to win this Masters. Six players had a share of the lead at some point on the back nine, and there was a five-way tie at the top when the final group was still on the 15th fairway.

“You couldn’t have had more drama than we all had out there. And now I know why I’m balding,” Woods said. “This stuff is hard.”

It didn’t look that way when he was younger, healthier and the most popular sporting figure in the world.

Woods lost his impeccable image to a sex scandal, one of the swiftest and most shocking downfalls in sports. He lost his health to back problems. He went two years without even playing a major.

Now the comeback is truly complete. And the race is on.

“A big ‘well done’ from me to Tiger,” Nicklaus tweeted. “I am so happy for him and for the game of golf. This is just fantastic!!!”

Woods now is three short of the gold standard — 18 majors — set by Nicklaus.

“I think 18 is a whole lot closer than people think,” Brooks Koepka said.

Joe LaCava, the caddie who stayed with Woods even when he didn’t play for the better part of two years, said they have talked about the record.

It was the first time Woods won a major when trailing going into the final round. Francesco Molinari, the 54-hole leader, was still up two shots heading into the heart of Amen Corner.

And that’s when all hell broke loose.

Molinari’s tee shot on the par-3 12th never had a chance, hitting the bank and tumbling into Rae’s Creek for double bogey. Until then, Molinari had never trailed in a round that began early in threesomes to finish ahead of storms.

And then it seemed as though practically everyone had a chance, until Woods delivered the key shots at the big moment, just like the old days.

Schauffele failed to birdie the par-5 15th and scrambled for pars the rest of the way for a 68. Dustin Johnson made three straight birdies late in the round, but he got going too late and had to settle for a 68 and a return to No. 1 in the world.

Koepka, one of four players from the final two groups who hit into the water on No. 12, rallied with an eagle on the 13th, narrowly missed another eagle on the 15th and was the last player with a chance. His birdie putt on the 18th from just outside 10 feet missed, and he had to settle for a 70.

“You want to play against the best to ever play,” Koepka said. “You want to go toe-to-toe with them. I can leave saying I gave it my all. He’s just good, man.”

Woods finished at 13-under 275 and became, at 43, the oldest Masters champion since Nicklaus won his sixth green jacket at 46 in 1986. That has stood as Augusta’s defining moment for years.

This one is sure to at least rival it.

“This is definitely, probably one of the greatest comebacks I think anybody’s ever seen,” Koepka said.

Koepka and Molinari had both faced Tigermania in the majors and held their own, Molinari at Carnoustie to win the British Open, Koepka last summer at Bellerive to win the PGA Championship. Molinari went 49 straight holes without a bogey, a streak that ended on the seventh hole. It was the double bogeys that cost him, and the Italian was gracious as ever in defeat.

“I think I made a few new fans today with those double bogeys,” he said.

Rain fell briefly, but it stayed away long enough for Woods to be presented his green jacket on the practice green, just like old times.

He looked like a new man, making new memories.

“Now I’m able to play golf again, and do it at an elite level again, which is something I’m just very blessed to be able to have that opportunity again,” Woods said.