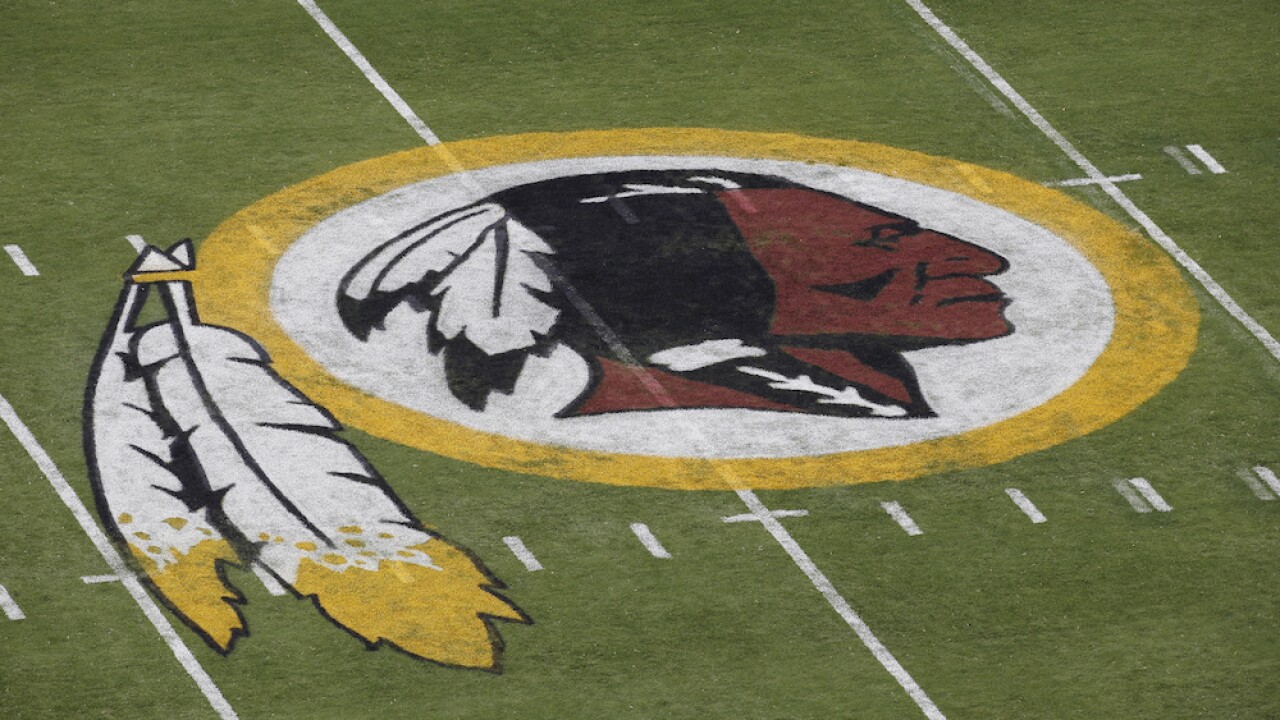 Copyright 2020 The Associated Press. All rights reserved.
Alex Brandon/AP
FILE - In this Aug. 7, 2014 file photo, the Washington Redskins logo is seen on the field before an NFL football preseason game against the New England Patriots in Landover, Md. A federal judge has ordered the Patent and Trademark Office to cancel registration of the Washington Redskins' trademark, ruling that the team name may be disparaging to Native Americans. The ruling Wednesday by Judge Gerald Bruce Lee affirms an earlier finding by an administrative appeal board. (AP Photo/Alex Brandon)

The Washington Redskins announced Friday that they are conducting a "thorough review" of the team's nickname — a day after two major corporations with ties to the team indicated that they'd like to see the name changed.

"In light of recent events around our country and feedback from the community, the Washington Redskins are announcing the team will undergo a thorough review of the team's name," a statement from the team read. "This review formalizes the initial discussions the team has been having with the league in recent weeks."

NFL Commissioner Roger Goodell said in a statement Friday that the league is "supportive" of the decision to review the name and said he's had "ongoing discussions" with team owner Dan Snyder in recent weeks.

The Redskins statement comes a day after FedEx — the company that pays the Redskins to display its name on their stadium — publicly called on the team to change its nickname.

"We have communicated to the team in Washington our request that they change the team name," FedEx said in a statement Thursday, according to The Associated Press.

Potentially big news: The #Redskins have been having internal discussions about their team name and now will conduct a formal, thorough review. Full statement, including quotes from owner Dan Snyder, on a possible name change: pic.twitter.com/49mpesZGs9

FedEx has paid the Redskins for naming rights at the Maryland stadium since 1998.

Later on Thursday, Nike — who has an exclusive on-field apparel contract with the NFL — appeared to remove all Washington apparel from its website. The company only lists 31 teams in its "NFL" section, and website searches for "Redskins" do not return any results.

Redskins apparel is still available on the NFL's website.

The moves came hours after Ad Week reported that three separate letters representing 87 investment firms called on Nike, FedEx and PepsiCo to terminate their relationships with Washington's NFL team. According to Ad Week, the firms that signed the letter are worth more than $600 billion combined.

"This process allows the team to take into account not only the proud tradition and history of the franchise but also input from our alumni, the organization, sponsors, the National Football League and the local community it is proud to represent on and off the field," Snyder said in a statement.

Snyder has resisted calls for years to change the team's nickname — which, according to The Associated Press, experts say is a "dictionary-defined racial slur." In 2018, Goodell said he did not believe Snyder would "change his perspective" about the nickname, citing a 2016 Washington Post poll that found that 90% of Native Americans did not find the team's nickname offensive.

In 2018, the MLB's Cleveland Indians dropped its "Chief Wahoo" logo — a red-skinned caricature of a Native American — from its visual identity. Several colleges, like North Dakota and Miami (Ohio) University, have moved away from Native American imagery and mascots in recent years.

The renewed debate over the Redskins name comes amid racial reckoning following weekslong protests sparked by the death of George Floyd at the hands of police.